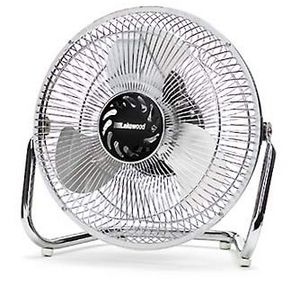 I have been buying this 9 inch Lakewood for years because they are small, they have a strong velocity. The air flow is really strong for such a small fan. I had 9 of these and still have one because I gave the others to family members. I strongly recommend this fan to anyone. Air Flow I love it! Three speeds and on high the sound is not bad. I like the sound when I sleep, it blocks out other noises because I cannot sleep in total silence. Durability I have not had any problems with it. They last a very long time. Design The design is perfectly fine.

one can feel the breeze not like others where the air goes to the sides elsewhere so this is a true product and also not too expensive also good budget, I would diffenently recommend the fan to keep cool.

I bought the Lakewood HV-9/C Desk Fan because my office is just not very cool in the summer.  I also liked that it came in a variety of colors and I picked the purple. *The pros:* It's small.  It fits perfectly next to my computer.  It has an adustable feature so I can rotate it up and down and make sure the breeze is either hitting me directly if I am really hot or just creating air flow around me if not.  I also like that it comes in a variety of colors.  The price was also very good for my limited needs. *The cons:* There are really only two cons to this fan, but they are kind of big ones. First, it's rather loud.  On one hand, at work, this can be a bonus.  But overall, I frequently have to turn it off to hear someone speaking to me from across the room.  Secondly, it's pretty strong.  I don't really like to have it pointing directly at me because I will frequently become too cold. But if I point is slightly away, it can create a good air flow and that is always nice when stuck inside a cubicle. Overall, for the price and size, I would recommend this fan.

I love this Fan.  It is very powerful.  I love the tilt feature the most because it fits any situation.  I would recomend this fan to everyone.  I also want to mention that the fan is priced very resonably.  The first of the three settings is perfect for any person.  The second setting you could say it kicks it up a notch.  The third setting is so strong that you might have to hold on to something.  I will always own a Lakewood.

The Lakewood fan gives a great breeze.  We have more than one.  They help to reduce the frequency that we need the air conditioner to come on.  At night, we usually raise the thermostat to 80 degrees or higher, turn on the fan and sleep comfortably.  This is a very sturdy, tough fan.  Ours survived the flooding of Katrina in New Orleans.  We were unable to use at least 98 percent of our household furnishings but the Lakewoods did like the old Timex watch commercials - they took a lickin' and kept on ticking.  They are inexpensive and yet work well.  How many products can really say that these days?  If you don't have one, get one.

**The size:**This fan is just 12 inches.**The Speed:**The fan has three speeds: low, medium, and high.**The flexibility: **The face of the fan can be turned towards a person in the room or toward the ceiling!**What is unique:**This fan is not made out of the plastic that is everywhere in today's products.  It is made out of aluminum and steel which is all together a sturdier material.**Assembly:**You put the fan onto the stand.  I did it with ease, even though I've mild corporal tunnel syndrome.**The looks:**The fan is sleek looking, a simple device with out all the what not in today's gadgets.  **Cleaning:**The fan is easy to clean.  You need a screw driver, and there are screws on the face that can be removed so you can clean dirt off the blades.  An air duster is recommended for the engine, to keep this engine humming for years.  It sounds complicated, but other fans aren't accessible at all.  When they get dirty, the manufacturer's idea for them is the trash bin.I plan to use this fan this summer to supplement my hard working air conditioner to bring down my runaway energy bill in a hot climate.

This fans puts out more air than you would expect from something so small.  I get hot easily and sometimes I need more air than the other people in my family, so instead of turning up the airconditioner, I just turn on my tiny fan with the big air flow. The only thing I would like changed on this fan would be to add another speed, a lower speed, because sometimes it gets me to cool.

Even though I prefer warmth to cold, I still like to stay as cool and dry as possible on a warm summer day. With the wide availability of air conditioning, there is less need for fans than in the past, but fans still have their use. For those who need a powerful fan to fit in a small space, one possible option is the **Lakewood HV-9/C High Velocity Fan**, a compact cooling device. **Fan Commentary:** Lakewood HV-9/C High Velocity Fan is a small, table- top style fan It is circular in design with a triangular base. The main fan unit is attached to this base at two points on opposite sides of the fan. This allows the fan to pivot back and forth, allowing the consumer to aim the air flow at a specific location. The fan is manufactured using an all- metal construction. The three fan blades are constructed from aluminum, and so is the fan's casing. The triangular stand is made from chrome. There are no plastic parts with this fan, adding to its durability.  Like most people, I have owned/used fans of different styles for years and years. I like to have an assortment of fans available for use. Box fans are fine for most purposes, but the airflow they produce isn't very strong and in some situations, they just don't cut it. Some situations require a powerful flow of air and this is when a fan like the Lakewood HV-9/C can make a noticeable difference. The best features of this fan are its high speed flow of air and its ability to pivot. The high speed is, of course, the main reason most people purchase a fan like this and it ranks as the most important feature. This fast- moving airflow can come in very handy after a hot, tiring day of working in the yard or playing sports. With the fan pointed directly toward your head, the sweat and discomfort are gone in a matter of minutes. Second in importance with this fan is its pivoting action. The main part of the fan is round and it attached to the base at two points. The fan pivots at these points, allowing the consumer to point the fan directly at a specific target. If desired, the fan can also be aimed directly at the ceiling, resulting in a good, even cooling effect for the entire room. Lakewood HV-9/C fan does help cool rooms with ease, but it isn't quite the perfect fan. First, it is quite small and doesn't have the surface area necessary to cool or dry a large amount of space. Second, the fan is noisy. In many ways, the sound reminds me of the noise produced by the propellers of a small, private airplane. Then, there is the problem with the pivots. They cannot be adjusted manually by turning them with your fingers, like is often the case with other high- velocity fans. Thus, the consumer is pretty much stuck with the present level of tightness because there are no knobs to turn to adjust it to one's own preference. **Bottom Line Viewpoint:** Overall, the Lakewood HV-9/C High Velocity Fan is a good fan that delivers a high amount of airflow. Its price is rather high for such a small fan and it is prone to getting hot, especially if it has been running on the highest setting for a long time. It could use some improvements in these and other areas, but it is still a good fan for those who want to cool off in a jiffy. It doesn't have the cooling ability offered by a larger size fan, but it makes a good choice when you need a concentrated amount of air aimed at a small area.