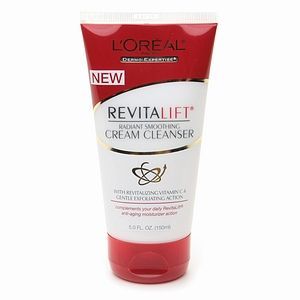 I started using this for about a month and a half now. I have acne prone skin, so I tend to get blemishes from the acne. I tried this cleanser because the last cleanser I was using was making me break out again. This cleanser is definitely creamy, but not thick. I love how gentle it is on my skin. At first, I thought it might not cleanse my face well mainly because it was soo gentle on my face; however, after rinsing the cleanser off, I immediately felt how soft my skin was. Not only was it soft, it looked brighter. After using it for about a month and a half now, my skin hasn't broken out (there are still one or two every once in a while) and my blemishes have lightened! Ease of Application I use my fingers, but I think if you really wanna get the nose areas for a deep clean, I would recommend a face exfoliating brush

Okay so I hit 43 and I am watching every line and wrinkle that's starting to appear on my face. So I am adding a lot of new things to my beauty regimen. I bought this cleanser as a supplement to my facial care routine. i feel that now I have to be more careful with what I use on my face and I have always been a fan of L'oreal cosmetics I mean really can a french cosmetic company ever be wrong? Needless to say I love it! i love the smell of it which is always the first thing that I check in a product that I'm using on my face. It lathers wonderfully as it cleanses and leaves my face feeling smooth and firm. Love it!! Highly recommend! Effectiveness I think this product is very effective. I feel my skin is smoother and tighter. The best part is that I feel my skin looks better. I use this product everyday and I feel my skin glows! Ease of Application All you need is a small dollop of this and it lathers up wonderfully! you will not be disappointed. You don't need much for it to lather up richly. Scent I must say the scent is one of the first things that attracted me to this product. I took a quick whiff of it before I bought it and it hooked me! The scent is not overpowering and soft.

I have been using the Loreal Revitalift Radiant Smoothing Cream Cleanser for about six weeks now and have been very pleased with it. I wanted something gentle on my face that would not dry it out, but that would clean it completely as well. This product did exactly that. I wet my face a little before applying it, and then I only have to use a small amount, and the creamy lather makes it go a long way. The price is good for the benefits that it provides. I love the fact that it contains Vitamin C that also benefits my skin. I have noticed definite positive changes in my skin while using this. My skin is clean, gently exfoliated, and smooth after using it. It looks and feels clear and radiant. There are many other Loreal Revitalift products that I can use afterward to help compliment the cleanser's benefits. I do not typically have any acne or blemishes, so I'm not sure how this would work for someone who has serious issues with acne. However, for some reason, I'd had a small breakout pior to using this cleanser, and they are cleared up now. So, from what I have seen, it did not make mine any worse, and may have even helped with clearing them up. I would recommend this cleanser for all kinds of skin types.

L'Oreal Revaitalift Cream Cleanser, which I purchased for a mere 4 bucks (after coupon), has pleasantly surprised me! The container is neither unattractive, nor wildly appealing, just kind of "there", but it's whats inside that counts!          In this unassuming, red and white, inverted tube I found treasure! My skin, even at forty-nine, has some oily areas...but lately also some dryer ones. The L"Oreal Revitalift Cream Cleanser tackled both those issues and won!         I have been using this same 5oz. tube now for a month, and i still have quite a bit left... it is a high sudsing cleanser that cleans well with just a tiny bit...maybe the size of a pea...a small pea! You can smooth it directly on your face, or use a washcloth...either way, lots-o-suds, and clean as a whistle! I usually just use my hands, and splash off with a little warm water...no ceremony, no extended wait time...just suds on, suds off. It removes my makeup as well, but has never left me with a "dried-out" feeling at all.         Not to put too fine a point on it, but it is such a good value that i have begun to use it in the shower on my upper body and arms.         As far as smoothing and lifting, the smoothness i feel most definitely. Nice. The lifting....ach...whaddya want? It does what a cleanser can, I suppose. A temporary slight lift, or lessening of some wrinkles. Don't get too excited about that feature, folks...but you knew that, didn't you? After all, if youth came in a tube, it would be sold out anyway, and on backorder until we all were too old to remeber why we even wanted it.         L'Oreal Revitalift "Radiant Smoothing" Cream Cleanser... two thumbs up!

I started using the L'Oreal Revitalift Radiant Smoothing Cream Cleanser about 2 weeks ago because I had a great coupon and it was part of a store promotion. I am not much of a fusser when it comes to make-up and skin care so when I went into work the other day and a co-worker in her early 30's was frantically reapplying make-up that had been ruined walking in the rain through the parking lot I was relieved that wasn't me. Imagine my surprise when she looked up and said "I wish my skin was as smooth and even as yours......" Thanks L'Oreal for making this 44 year old glow!!!!! I'll keep buying this, even without a coupon......

My stepmother told me about the L'Oreal Revitalift Radiant Smoothing Cream Cleanser and how it cleans your skin but also helps your skin look smoother and healthier. I thought it was only for older people until I bought it and started using it for myself. It does great for my skin and it makes my skin feel so soft and look so great. I love how you don't have to get that much out of the bottle for you to moisturize with, because it was pricey and I didn't want to waste too much and have to buy more. I also love how that it really smoothes my skin after I apply in day and night. My friend even told me after I used it for so long that my skin looks and feels so smoothe and asked me what I was using to get my skin like that. I told her of this product of course, I don't know if she got if for herself but I know once I ran out I had to go buy some more like asap, but I did use it up until it wouldn't come out anymore.

I bought it because I had coupons making it nearly free, once again. So that was a nice price point. I needed a cleanser and wanted to try something new. I had previously been using Neutrogena foaming face wash. Recently switched to use Clean and Clear blackhead eliminating facial scrub. I wanted to try something that had some exfoliative properties. I chose this one because it said "gentle exfoliation." However, there is not anything "scrub" like about this cleanser. It is a white, medium thickness, cream. It smells nice, but not too strong. It cleans EXCELLENTLY. I use it with a Buff Puff to provide the extra exfoliation I like. I have to say I think it has really improved the look and feel of my skin. I will continue to purchase it. This is the first L'Oreal product I have used and I am intrigued.... perhaps with more coupon offers they can get me to try other products and get a life long customer!

I was a little hesitant to try this product because I have very oily skin and was afraid the rich creamy cleanser would cause me to develop blackheads. All I have to say is 'AHHHHHmazing'! It removes all of my mascara, eyeliner, and mineral powder foundation and leaves my skin moisturized and youthful. I have not had any breakouts either. It's very gentle on the eyes and should also be used on your neck to get the same effects your face and eyes.

For a Loreal product, this cleanser is actually priced reasonably. That's probably one of the reasons i got tempted to buy it, nonetheless, i have no regrets...Loreal Revitalift Cream Cleanser is a foaming facial wash that gently exfoliates the skin, giving the face a radiant, smooth appearance. It contains moisturizing vitamins that keep skin looking younger and healthier...When I am not using Pond's facial cleansers, i use this product because it is mild and yet delivers a wonderful outcome. I like to use this in the shower or in the bath and I just make a good lather to remove impuirites from my skin...and after regular use, i really experienced the difference. Complemented with a good moisturizer or a night cream, the effect is really great. Just a helpful tip, if you subscribe to the Loreal Paris website, you'll get good discount offers that will make your next shopping more exciting and less expensive.

Although I have used a lot of diffferant products that I feel are excellant I like this particular one because of the exfolliating quality.  It is creamy and smooth and easy to use.  L'Oreal revitalift leaves your face feeling soft and clean.