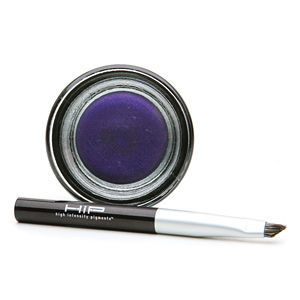 I have long been a fan of MAC Fluidlines.  Although they work beautifully for me as an eyeshadow base and liner, I could not resist the buzz about **L'Oreal HIP Cream Eyeliner,** especially when it went on sale for half price at our CVS.  I quickly bought a package of the blue and eggplant colors.     **WHAT IS HIP EGGPLANT CREAM LINER LIKE?** **L'Oreal HIP Eggplant Cream Liner** is a gel liner which is a pretty dark purple color, great for lining.  Well, if it worked, anyway.  More on that later... It comes in a small jar with a screw on lid and an angled brush which was not great but not terrible either. The consistency was very creamy and easy to apply on the brush.  When on the skin, it was a beautiful color, very smooth, and I was quite impressed with the smoothness of application without lumps or skips. There was no odor and no burning, which I found really relieving.   HIP products tend to torture my eyes but for some sadistic reason, I was willing to try again this time.   **HOW WELL DID HIP EGGPLANT CREAM LINER PERFORM?** **L'Oreal HIP Eggplant Cream Liner **looked really nice on.  I did a perfect line with it.  I was so excited that I went down into town for a few hours wearing my new liner.  I happened to meet a lot of people down there and after having exciting conversations about makeup, I could not understand the weird looks I was getting when I told them that I was a makeup artist. Gosh, I get all kinds of looks, but rarely looks like that- especially when I am only wearing a little bit of makeup. I had to take my car in so, I was gone a total of two hours.  It was a perfect day. My eyes did not water, there was no rain out and it was not too warm or too cool.  What a beautiful day it was. I was talking to some people who looked like they were kind of hesitant to talk to me, while I waited for my car to be looked at, and then I went into use the bathroom.  When I went to wash my hands before leaving, I looked up at myself quickly and then in horror, I looked again. My eyes looked like a two year old did them.  Not only did my eyes have crumbled fragments of liner all around, but they bled onto my skin in a random pattern that looked anything but good.  On top of that, what liner was left around my eyes had drifted in smeary patterns that surpassed the heroine chick look of the early 90's. In short, I looked horrible. I did not want to go out of the bathroom, and although I tried to clean it off my eyes, it would not budge and I did not have any soap I could use on my eyes, so I was forced to walk out of the bathroom that way.   **FINAL COMMENTS** I have had great results with some HIP products, but with all of their eye products, I have to say I have had excessively bad problems with them.  I have never had an eyeliner look THAT bad on a good day with no eye rubbing or watering, I did manage to remove the** HIP Cream Liner in Eggplant **with makeup removing soap that I use, and I decided I would never try that again.  I took the other color back, as it did the same thing, so it was not color specific in reaction. Despite the good purchase price, **HIP Cream Liner in Eggplant** was not a good deal, even if they GAVE it to me to use.