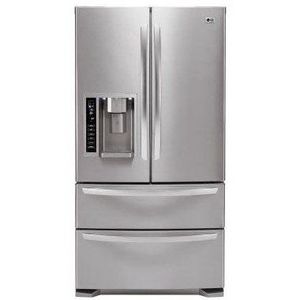 I truly love this refrigerator! I have had it for a year now. I haven't had any problems with it at all. It keeps perfect temperature for all my foods. I love how I can view all items easily when opening refrigerator. It has 2 freezer drawers. I keep frequently used items in the top drawer and large items in the bottom drawer. It has a very user friendly panel for accessing water and ice. I recommend this refrigerator highly!

After 6 months the ice machine stopped working. We got it serviced and it still isnt working correctly

We have a large family and this refrigerator is perfect for everyone holding drinks cold. All the leftovers and holds ups to 8gallons at one time be it milk, tea or juice.

I am very happy with this fridge. I love the 2 drawer option. the two main doors open nice and wide so you can get to anything easily, all my food stays nice and fresh, its easy to clean and the water dispenser saves us so much money on bottled water since we dont need to buy it anymore and its good for the environment to not buy so much bottled water. you can easily move the shelves to adjust to what you have purchased. I love the long drawer in the bottom of the fridge for all my coldcuts. we get so many compliments on this fridge. I would recommend it.

I've had this refrigerator for over six months now (since Feb 2011) and have given it an outstanding rating because, overall, i feel it's an excellent value for the price. The only truly legitimate con i've read from other reviewers is that the ice dispenser dispels either too much ice or none for several seconds while it's cranking away. In defense of this, having had many refrigerators in my past, i prefer the ice maker taking up so little room. The downside of this may be the inconsistent dispensing. I've found one way to minimize this issue is to open the ice maker door maybe once a day and bang (gently) on the ice reservoir to loosen the ice up. Also i don't let it get too full since that may create a jam. Once it becomes about 3/4 full, i push the toggle switch to the off position and then switch it back on when the level drops. It still doesn't dispense as consistently, but this does seem to help. Some of the other grievances i found amusing, such as: The stainless steel smudges. Uh, folks, don't know what planet you're from, but where i come from, that's the nature of the beast. SS smudges, period, end of story. It needs to be cleaned fairly often if you want it to look shiny (i use window cleaner on it about once a week). If you don't want to clean it and don't want the smudges, you may want to consider something other than SS. The doors don't close unless you firmly push them. Hello? That's a problem??? The solution, to my sense then, is simply to program yourself to firmly push the doors closed. If that's something you can't (or don't want to) do, a different type of door might be better for you. However, humans are pretty adaptable - this can actually be learned. I too had to learn to do this since i'd also become accustomed to just giving the door a shove and walking away.And, if you do forget, LG has compensated for this by having the refrigerator beep at you if one of the door stays ajar. There's not enough room in the door dispenser to put my tall glass to get ice or water - the water/ice goes everywhere. Maybe try using a smaller glass and transferring it to a larger glass. Handles look/feel cheap. What??? I don't know what refrigerator is being referred to - i'm quite happy with the look and feel of the handles on my unit. Some complained that they can't keep the temperature below 40 or that when set on 40, some food items freeze. That sounds like a problem with those particular refrigerators. A simple call to customer service would get it fixed. If it's within a year of purchase, they're under warranty so won't cost a thing. The temps in my unit are spot on. Bottom line: I maintain this is a wonderful appliance for the price, and i would buy it again if the need/occasion were to arise. For those who disagree: I suspect some people just like to complain. :)

Wow, the fridge has lots of space.  It is easy to move the shelves around to create any set up.  There is a spot for everything.  All of the food is visible with the help of the see through shelves.  It helps me to keep track of all the food so something doesn't get lost in the corner. The control panel on the front is easy to use and helps keep track of the temperatures in the fridge and freezer.  There is an alarm that goes off if the door is left open too long.  This is a great feature for our family because we have a three year old who likes to open the door. My only complaint is the freezer space.  If you have another stand alone freezer, then this will be adequate.  We do not, and I have a hard time fitting all of my food in there.  The freezer drawers are not very deep.  Usually this is not a huge deal, except when we go out for shakes and like to freeze the left overs.  The tall cups do not fit. :)

I shop for  months plus  spent hours on the inter-net checking out refrigerator's before buying my LG French Door model LRFC 257500TT. Checking door styles top verse's bottom freezers. I liked the bottom freezers because you do not loose your  cold air when ever you are opening your refrigerator door several times a day. Which can save you money. Checking to the Energy Star rating  to see what brands were best.  Stain-lees steel over enamel.  I like Stain-less best finger prints  doesn't show as much. The drawers in side are awesome two big veg's bins, a huge meat drawer you can put a larger pizza in to it. I love the shelves on the doors they hold all the condiment's you can think off then some. The only down fall to my frig is thats it so big I have to use a step stool to clean the top shelves, but maybe it's me being four foot eleven and one half inches tall. I would and do tell everyone how my LG is the best  refigerator and everyone should buy one ASAP.

I love my french door LG refrigerator. Both sides open for the fridge section so it's super easy to get large platters and pizza boxes in. I also love the double drawer freezer compartment. I keep the meats on the bottom, and the frozen bag stuff in the one above that. I don't have to go digging through my freezer anymore. The water and ice maker are a plus although my husband complained that this model doesn't make crushed ice. Having cold filtered water is great too, although they could have made the opening a little bigger for our larger water glasses. I like the 'alarm' feature too. IT lets you know when the fridge doors are left open which is great for me because usually there's a kid standing in front of the open fridge just looking.. Now I know they're there and can yell at them for leaving the door open. LOL. There's also a lock on the water/icemaker so young kids can't play with the water or ice, but my 6yr. old grandson figured out how to unlock right away, and he had to show my husband. It's easy to disable the lock function.. just a matter of pushing a button.

We have recently moved into a new home and along with a new home comes new appliances. We were excited to get a new refridgerator and we were focused on a french door style. We came across this refridgerator and were instantly pleased with the appeal of it. It looks slick and very classy. There are a couple of cons that I would like to point out to all you potential buyers. The first would be the storage in the freezer space. I will say it is nice for organization purposes to have the second freezer drawer, but the space you get it pretty limited. Luckily, we have a refridgerator out in the garage for all of the items that do not fit in the freezer in the house. Secondly, there is no light on the ice.water maker on the door. This makes the late night drink of water a little less convienant. Other than that, perfect. We found that there is a ton of space in the refriderator part.