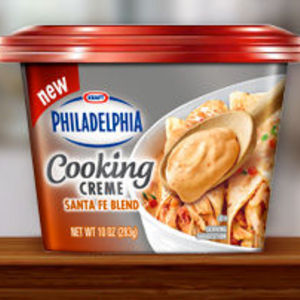 I had already bought the Italian Cheese & Herb cooking creme and loved it. I was very excited to try this product and was equally disappointed. I unfortunately didn't try it before adding it to my food and so had to "fix" it with so many other sauces. My family disliked it to say the least. It just tastes like a pound of cheap condiments were dumped into a cup of cream cheese. It was spicy which was not expected specially cooking for younger children. The texture was creamy hence my 2 stars. Can't think what I can put the rest into to salvage what I had left so it's going straight to the garbage. Will not buy again even if its free.

As I think I may have mentioned before in my other reviews, I am not a huge cream cheese fan. Unless this worthy stuff is baked or mixed into something else, or flavored somehow (or maybe spread over a cinnamon-raisin bagel) they can hold the cream cheese as far as I'm concerned. Then I tasted ***Kraft Philadelphia Cooking Creme Santa Fe Blend*** and **WHOOPEE!** -- now I'm a believer! **WHAT THIS IS:** ***Kraft Philadelphia Cooking Creme Santa Fe B******lend*** is a glorious mixture of many ingredients, including cream cheese, lime juice, and various finely chopped peppers. It is light orange in color, smooth but not too slick, and spicy but subtle. I'm telling you truly -- even if you **don't** feel like using this stuff as a topping or a cooking component -- you could have a nice snack, just standing there by the refrigerator, spooning this up right out of the jar! **STATS:** ***Kraft Philadelphia Cooking Creme Santa Fe Blend ***comes in a 10-oz. container and 1/4 cup is considered to be a single serving which contains 110 calories with 70 calories from fat. There are 8 grams Total Fat, 5 grams Saturated Fat, zero Trans Fat, 30 mg. Cholesterol, 480 mg. Sodium, 5 grams Total Carbs, zero grams Dietary Fiber, 3 grams Sugars, and 4 grams Protein ... along with 15% (D.V.) Vitamin A, 2% Vitamin C and 8% Calcium. Although the sodium seems high, remember that -- aside from my little joke about eating this stuff right out of the container, heh heh -- this is really meant to be a topping or cooking sauce which will provide sodium and flavoring for whatever food it is used with. So the sodium ends up being diluted with whatever meat, fish, or veggies are in the finished dish. **TASTE TIP:** There are dozens of ways to use ***Kraft Philadelphia Cooking Creme Santa Fe Blend ***and you don't have to get fancy -- the other night I made a serving of hot pasta, topped with a layer of canned diced tomatoes. I added some Cooking Creme to that, heated it in the microwave for a few minutes and **OLE!** is all I can say! I have also used it as a spread in place of mayonnaise for a tuna sandwich. This would be a dynamite addition to mashed egg yolks for Santa Fe deviled eggs. Heat seems to unlock its full flavor and I might try this on a hot baked potato or a scoop to garnish a dish of chili someday. **MY VIEWPOINT:** It was with some apprehension that I approached ***Kraft Philadelphia Cooking Creme Santa Fe Blend ***at first -- and I must admit that if I had not had a good coupon -- I probably wouldn't have bothered, but this has been **fun** and I am looking forward to trying the other flavors too. I can strongly recommend this winner -- and for somebody who used to **think** she didn't like cream cheese, that's a major concession!

I thought this product would be better then it was. It was alright. It was a little "too spicy" for my 4 children but I didn't mind it. It was used in enchiladas for dinner. I thought it was pretty good. Not the best or even excellent but pretty good. I may or may not buy this product again. I guess it depends on if I have a coupon or if it is way on sale. The Italian one is waaaaaaaaaaaaay better! I liked it a lot!

we have taco night at least once a week, and I always have to make a bean dip with it. I usually use refried beans, salsa, and cream cheese, but sometimes the younger kids complain about the tomatoes in the salsa. So this last time I used the refried beans and a tub of the the Santa Fe Blend cooking creme and was able to get a great flavor without the stuff the kids don't care for. I am hoping to use it in the sante fe casserole that they have in one of their cookbooks, because it looks really good. I have been able to combine coupons so that I can purchase it for not a whole lot of money, because it is a little pricey, but i was able to substitute it for two ingredients, as far as my bean dip went, so that wasn't too bad. The flavor was pretty good, not too spicy but enough of the southwestern flavor coming through so that you knew you were eating it. I have recommended it to a few of my family members already, and will continue to do so.

I used this last night in the Southwest Pasta Skillet and it was really good. I did not need to add any spices or special items. It was a great recipe and I had everything on hand that I needed. I think these cream cheeses are great items to have on hand in order to whip up dinner/lunch at the last minute. It had a great flavor. It was a little spicy but really good. My 5 yr old loved it and wanted to lick the container after I emptied it.

I hosted a house party for Kraft's Philadelphia cooking Creme yesterday. I made two dishes from recipes provided by Kraft: Santa Fe Chicken Casserole and a Southwest Pasta Skillet. We had 20 people at the party and everyone loved the recipes! Neither one of the dishes called for any seasoning, but the cooking creme provided ample flavor. It is a little spicy, but also creamy and rich. I was amazed at how fast and simple it was to create these dishes. If you are thinking about trying this product, I would recommend using the recipes provided on Kraft's website. There are a couple of downside to the Kraft Philadelphia Cooking creme products. The product is slightly more expensive than buying regular cream cheese, but I would definitely buy it if I had a coupon. Also, the product is not very health conscious. Hopefully they will come up with lighter versions in the future.

I recieved a coupon in the mail to try this item. It came with a little booklet attached with some recipies. I tried the easy chicken enchaladas. They were very tasty. The creme is easy to use and has a nice flaor and consistancy. I will defenately buy this again.

Easy to use, great taste, great recipe on the carton. This was my first time purchasing the new Kraft Philly Cooking Creme. I purchased the Santa Fe Blend and follow the recipe on the back for the enchiladas and my whole family loved it. There was plenty in the container and fed the 4 of us. It was seasoned perfectly, if you are a fan of mexican food. Not to spicy which is perfect for me. I can't wait to try the other flavors. Great item to keep on the refrigerator shelf for a quick weeknight dinner.