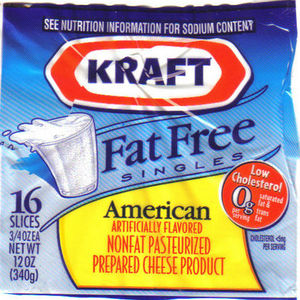 I grew up eating Kraft processed singles and I'm not sure if I knew about real cheese until college. For me, the fat free slices don't taste that different from the packaged cheese I used to eat. It grills well, it works on burgers and it's even good for omelets. Doctor friends tell me that I'm better off eating real cheese, but if you're trying to keep your fat intake down, I recommend this product. I've been eating it for years only because I don't like to keep real cheese in the house. When I nosh on this in the middle of the night, I don't feel guilty. It's definitely far superior to any other fat free cheeses that I've had.

Above all, grilled cheese can really make a kid smile. Especially when it's made with the right cheese. Kraft Fat Free American Cheese Singles didn't do it for me. You can tell that it is fat free. It tastes different from regular cheese. It melts well - which surprised me a bit. I figured it wouldn't melt the same if it was fat free. Probably silly of me to think that in the first place. The major problem I had with the fat free version is the stark difference in taste. I didn't expect for it to taste exactly the same but I also wasn't expecting to experience an after taste. The price of the cheese is a bit higher than it's original version as well, about fifty cents more where I shop. Overall, I don't think I will be buying this anymore. The after taste was a huge turn off for me.

I like to keep my diet low in fat, but I am a huge cheese fan. This has led to me being creative with fat free and low fat cheeses. I first stumbled upon Kraft Fat Free American Singles when I was craving grilled cheese. My first impression of the cheese was that it was like a piece of rubber. When I unwrapped the slice, it all stuck together and to my hands. Once I finally got it on the bread and grilled it, I was pleasantly surprised! The cheese melted like normal cheese and tasted almost identical to regular American cheese. I don't recommend this cheese by itself, but if you are making a sandwich or using it with other food items, it will work great!

I like Kraft singles.  That is the only prepackaged sliced cheese I buy. I have to say though, the fat free version was very disappointing. It had an odd taste and left an after taste.  It melted fine, but seemed to have an oily taste.  I guess it is like an artificial taste?    It may be alright to use in cooking where the odd taste will be masked by the flavor of other foods, but not where the cheese is the focus of the dish like in mac & cheese or grilled cheese sandwiches. I like Kraft singles, but I don't recommend the fat free version.  People who are watching their diet may want to try cutting back somewhere else, this fat free cheese tastes like a fat free product...not good.

It may not be something you should want to admit to in this day and age of fancy, gourmet cheeses and "cutting edge" foods, but I still really love good American cheese.  Aside from a taste for extra sharp cheddar and a few other basic types, I'm perfectly happy just standing in my kitchen next to the fridge, eating a couple pieces of American cheese -- sometimes just plain with nothing else.  It is mind-boggling to think of all the American cheese manufactured by Kraft, Incorporated, which I have consumed just that way over the years.  I also tried their *2% Reduced Fat American* a few times and that was not bad either.  So it came to pass that I decided to try *Kraft Fat Free American Cheese Singles*.  I figured if it was manufactured by Kraft, it would probably be okay, right?  **WELL, IT WASN'T!**   When I opened the package, even though each slice was wrapped in plastic, there was a funny **SMELL** -- not unpleasant, as though anything had spoiled, just **wierd**!  I tried a couple slices just plain, with nothing else, which is the way I taste any new cheese.  Shortly thereafter, my mouth was flooded with a wierd aftertaste.  It wasn't disgusting, just strange -- a sort of synthetic taste as though I had been eating artificial cheese.  Just to be fair, a few days later I tried it again in a sandwich.  The same thing happened.  After checking the ingredients info, I am not surprised -- *Kraft Fat Free American Cheese* is made from whey, water, skim milk, dried corn syrup, dyes and preservatives, and at least ten components which I can't even pronounce.  We have always known that American Cheese was a highly processed food but at least it always tasted like cheese.  I frankly don't know what this fat-free product tastes like. **STATS:** One slice is considered to be a serving which contains 30 calories with zero calories from fat.  There are zero each total, saturated, polyunsaturated, monounsaturated, and transfat, less than five mg. cholesterol, **280 mg. sodium (in a single slice!**), two grams total carbs, zero grams fiber, one gram sugars, and five grams protein.  In the interest of fairness, I must add that there are also 6% (D.V.) Vitamin A and 15% Calcium. **TASTE TIP:** This one is easy; ** whatever you do, DON'T BUY THIS STUFF!**  If you want to reduce the fat in your diet, there are many other delicious options out there for you to try.  You don't have to resign yourself to artificial cheese which you are going to end up tasting for a couple hours afterward.  The only reason I left two stars on is that some people out there must be buying this on a consistent basis -- otherwise, Kraft would not continue to make it.  Maybe there are some people out there who like *Kraft Fat Free American Cheese Singles* but I have to tell you -- **it didn't do much for me!**