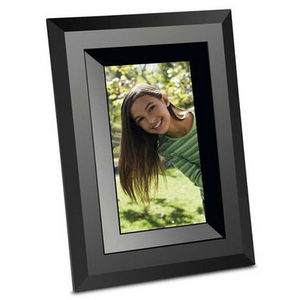 THis was my first look at the digital picture frames.  Wanted to get one for my Mom who is not much of a computer user so it had to be easy to use.  Bought this one for my wife so we could test it out.  Very easy to load pictures on.  Inseted the SD card and my usb drive at the same time and copied the pictures over.  Didn't even need a computer, or card reader.  Pictures are very clear and the random setting on the change effect makes it very intresting to watch.  Many configurable options for delay, brightness and contrast.  Plan to buy one for my parents, in-laws, sister, brother in-law.  It may be the only gifts we buy this year.

If you are looking for an easy way to receive and display photos this product sounds like a good idea. It does deliver - somewhat. Some problems like the instructions included with the product being minimal, a web site so slow it was painful and a Facebook fiasco had me a little frustrated. The easiest feature was being able to put the photos from my computer on the frame. Of course, you could do that with any photo frame so I don't see any advantage using the Kodak Pulse. There is a feature online that allows you to have your Facebook friends photos automatically show up on your frame. When I opted to use it I wound up with 56 photos of people that I didn't even know. Going back to the website to undo that option caused almost all of the photos on the frame to vanish. I'm still trying to figure out what happened there because there really were some photos that I wanted. The frame is supposed to automatically accept photos from people you give a special email address to but you actually have to tap on an icon that appears on the screen to view them. On the plus side, the photos are clear and easy to see even from a distance. You can set it to the length of time a photo is displayed and if it is displayed alone or in a collage according to your preference. A nice feature is you can set the frame to turn on and off automatically.

Holds up to 4000 photos and is compact enough for a cluttered desk or for hanging on a wall. I gave similar gifts several years ago to family members and finally recieved one myself. Very easy to download photos to and to regulate the viewing.

I received this for Xmas from my husband and absolutely love it.  The Kodak digital photo frame is easy to use and navigate.  I was impressed with its ease of use for my daughter to use.  It has several input slots and the color is awesome and amazing.  I would highly recommend this product to anyone who wants to show off their photos all year round.  Others that I have seen and tested are not so user friendly and complicated to use.  The Kodak digital photo frame has a touch screen capability unlike no other.  It works off of UL or batteries.  We purchased this at such a great deal I wished he had purchased 2 of them just so that I could have one in another room.  I do not keep this on all night and only cut it on when people are coming over or for special occassions.  I like the ability to frequently change pictures so that I may keep my family up to date with the seasons and sport functions.

THE KODAK 5.6 DIGITAL PHOTO FRAME IS THE MOST AWESOME FRAME TO OWN.   IT IS PUT OUT BY A COMPANY THAT I TRUST,  MY FAMILY REALLY LOVE IT.   I WOULD RECOMMEND IT TO ANYONE.  IT IS A VERY GOOD VALUE AND INVESTMENT TO HAVE.

I just love my new Kodak 5.6'' digital photo frame so much, I bought mine as a gift for myself and I love it so much I bought one for my mother and my sister and my daughter-in-law, It is so easy to use just slide the memory card into it and the picture start playing right a way, it even has sound and music if you record on the memory card, My mother is not very techo, but she found hers very easy to use as well, Now we sent the memory cards to each other and then on to my sister and them to my daughter-in-law, So the whole family can see and hear everyone from Florida to as far away as California and back to Georgia. My mom just found special frame outlines for our Kodak 5.6'' digital frame, like a  birthday one and a Merry Christmas one, she has showed all her friends from her trailer park and even brings it to bingo with her to show her friends, when she gets a new memory card in the mail, I would recommend this Kodak 5.6'' digital photo frame, to all ages young and old, it is very easy to use and very fun to keep up with your family, oh I forgot to mention it also comes with a remote control, that is very simple to use and very compact too.

The Kodak easy share digital photo frame is awesome. This frame is really easy to use and displays not only the pictures but the time as well. You have many options to show a calendar and time and pictures or calendar and pictures or time and pictures. Which ever you chose it is great quality. The frame plugs in to the wall and can either be hung or set on something. It looks just like my other pictures on the top of my computer desk. The outer frame is interchangable too. I chose the dark black frame as thats what most of my other pictures are in. You can transfer pictures from the computer to the frame using the usb cord or you can use a memory stick plugged in to the back as I have. This is a quicker and easier way in my opinion. You can change, add or delete, pics as needed. It also has a remote to control the speed and other actions as well. This was one of my husbands best gifts he has gotten me so far. I absolutley love it and how the pics are displayed in a slow but high quality format.

I received my Kodak digital frame as a Christmas gift. I had been thinking about buying one for quite some time but had not gotten to it. I just love it. It was soooo easy to load the pictures on. If you use a 2 GB SD card you can load near a thousand photos depending on the size of your pictures of course. It is like having a thousand frames but without taking up all the space. It is one of the best gifts I have received. You can bet I will be giving one to my photo crazy friends and relatives. You can change the pictures if you choose and even gift one with pictures already loaded for an extra surprise for that someone special. The clarity is amazing and the hours of pleasure derived are innumerable. It doesn't take up much space yet it delivers so much. If you have a digital camera and love to take pictures you need the Kodak DIgital Frame. Have that special vacation you never want to forget ? Theme a frame for vacation specific. The possibilities are endless. A great product. 5 stars and more.

**The Kodak EasyShare Digital Photo Frame** When it comes to cool toys to have around the house, the Kodak Easyshare Digital Photo Frame is a nice one to have.  It's one of those electronics devices that is not only nice to have one in your own house, but one which is easy to give as a gift, because everyone likes to display photographs.  The main use of a digital photo frame like this, is the ability to display many pictures at the same time, without having to worry about not showing the right picture, or having to look at the same one over and over again.  Instead the Kodak Digital Photo Frame affords the owner an ability to show off many different images and does do with almost no maintenance at all. **What is the Kodak EasyShare Digital Photo Frame?** The Kodak Easyshare Digital Photo Frame is a 5.6 inch digital photo frame that shows off all of the pictures that you want to.  It works by popping an SD card from your digital camera into the side of the camera or by using an external flash-drive, and downloading the pictures that you want on to the picture frame.  By having two slots for SD cards, you can hold a lot of pictures in the frame, and the device allows you to create, edit, and view slide-shows as you wish them to be presented.  These slide-shows can be created outside of the frame and moved on to it, or you can use the Kodak Quick Touch Border, which is basically a menu of buttons that can be drawn up on the screen to move, delete, or do anything with the pictures that you choose.  The screen itself is 5 inches and gives off a very nice view of your pictures in crisp detail.  To power the photo frame it merely takes plugging it in with the thin cord in the back, and you are off and running. **ViewPoint of the Kodak EasyShare Digital Photo Frame** It really couldn't be easier to use the Kodak Digital Photo Frame, because it is simple to set up, and when you want to edit the pictures or their presentations, it is only a few clicks away from being done.  The photo frame is then put out much like you would put any other photograph, with the exception being that it will then rotate through all of the photographs that you want it to.  It is great for things like a family photo album, a way to display all the vacation photographs that have just been taken, or just great landscape photographs to denote the season.  This is a great gift for relatives, because they can display photographs of grand-kids or upload photos from the past which have been scanned in to a computer and then up-loaded to the digital photo frame.  The sky is limitless for this great (and durable) product, and it is one that gets very high marks for not only its ease of use, but for how easy it is to set up out of the box.

It is very easy to use out of the box, I connected it with quite a few different sources (SD card, CF card, USB Flash Dive, etc), and was able to navigate around easily with the remote. I feel the photo quality is not bad, but the audio quality is not very good.