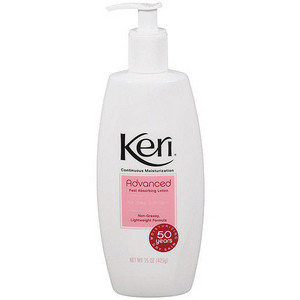 "Keri Lotion helps you surround yourself in continuous moisturization" is what the advertisement of Keri Lotion say about it. It also says it will keep you "all day soft, all day smooth." I had a bottle of Keri lotion for about a year now. The good thing about it is the bottles are pretty big and can last you a long time. I only use it in the winter when I have dry skin. However, it does not do what the advertisement says. It does moisturize your skin, just not all day. I would have to reply apply every couple of hours or even before. It does not make my skin soft and smooth either. It does apply smoothly and does not leave any type of mess behind, but it also has a scent that I did not appreciate. The price of Keri is reasonable I believe. It is not too expensive for such a large bottle of lotion that will last you a while. I still have the same bottle I have been using for more than year now, but I have stopped using it because I did not really like it.

According to the Keri webiste, Keri Advanced offers the same features as the original formulation (like aloe vera and vitamin E); it is not heavy or greasy; and it is fast to absorb. Having used Keri Original and found it to be effective but greasy, I thought the Advanced version sounded more to my tastes. But, while I don't entirely dislike it, there are many lotions I like better, and it's not something I'll buy again. True to the claims, the Advanced lotion is light and not greasy. In fact, it's so light and non-greasy as to be almost watery. So, when my skin is really thirsty, the lotion absorbs pretty quickly -- no faster than a lot of other lotions, however. But any other time, it sits there like water, and to get it to absorb, I have to swing my arms, wave my hands, slap myself around, and rub for a LONG time, usually while wondering if the Advanced formula is a poorer value because it seems to be pretty watered down. To its credit, once it has soaked in, it leaves my skin moisturized, soft, and scented lightly with that characteristic Keri fragrance, up until I wash. So, as a lotion, it's good, just not as a fast-absorbing lotion, and even though I won't buy the Advanced formula again, I would buy Keri again.