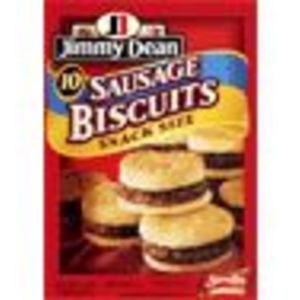 Jimmy Dean Snack Size Sausage Biscuits is one product that I have a love / hate relationship with. They are really good. The are also pop-able... A weight gaining combination. I really love the little sausage biscuits. The sausage is very flavorful. The biscuits are crumbly. I enjoy the combination. It could be said that the biscuits are slightly dry and the sausages are slightly oily. They are. But, the combination of the two together balance each other out. I will not say I feel really good about myself the next day. I know that these are not good for me. These flavor - filled sausage biscuits are simply amazingly satisfying. I wouldn't recommend them for anyone on a diet or who is very health conscious. I would recommend it for a once in a while indulgence that is not part of a regular regimen.

Jimmy Dean Snack Size Sausage Biscuits are perfect for just that - snacks! The best part about them is the biscuit. It's a great crumbly biscuit, much like the ones you find at McDonald's. The sausage has an awesome spice to it, and it's cooked very well. The meat is of decent quality. What's even better is how quickly they can be made. They're very good for a quick snack or a running late breakfast.

My daughters love these and they are the perfect size for children! I don't personally like sausage, but I have tried the biscuits and they are so soft and fluffy. Sometimes my daughters will eat the sausage separate, so I will put jelly on the biscuits for them. The sausage has a lot of grease on it, so I just soak it up with a paper towel. They cook up very fast in the microwave and the price is pretty cheap too!

These! Oh my goodness! They are so so so so good! My dad used to get these all the time. All you have to do is heat them up in the microwave and chow down! The biscuit warms up well and it left nice, soft, and warm. The sausage is extremely flavorful as usual. Nothing less from Jimmy Dean once again.

Before my mom became chronically ill four years ago with various ailments, I rarely had to be involved in the whole meal-planning/meal preparation process, at least not for the one major meal at which we eat together - dinner. That's not to say that I never cooked or learned how to prepare complex meals.  I've made a pretty good honey-mustard chicken a few times, plus I can make Colombian-style white rice (not as easy as it sounds, trust me), as well as the usual breakfast staples (scrambled eggs, bacon, French toast, and pancakes made with Bisquick). But when Mom was more energetic and healthy, she preferred to do most of the cooking.  I'm not a bad cook, but I am a slow and sometimes messy one, so for Mom it was far easier to keep on doing it even though I love the whole process of preparing the meal. (I'm less fond of the cleanup, as necessary as I acknowledge that to be.) Now, of course, Mom *still *likes to cook, but her energy levels are like that old gray mare, "not what they used to be," so as of late at least three times a week I'm called upon to either choose an entree that's not too tiring for Mom to fix or, more to the point, fix something quick and easy myself.  Now, because Mom's appetite is also a shadow of its former self, all she'll want is a ham-and-cheese sandwich and some soup.  I like ham-and-cheese, but not as much as Mom, so I will often settle for fixing "breakfast for dinner." **Jimmy Dean Snack Size Sausage Sandwiches: ** One of my quick-meals-of-last-resort is Jimmy Dean's **Snack Size Sausage Sandwiches, **which are miniature versions of the company's meal-sized **Biscuit and Sausage Sandwich**.  They're made from the same basics, namely a Southern-style biscuit and a patty of **Jimmy Dean Sausage**, which is made from pork meat and a whole bunch of spices and flavorings.  *(For an Ingredients list, please refer to http://www.jimmydean.com/sitecontent/sandwiches/2007/10/10/sausage-biscuit-sandwiches.aspx) * **The Basics: **Unlike the meal-sized Biscuit and Sausage Sandwiches which come six in a box, the smaller **Snack Size **package contains 16 mini-sandwiches, packed in eight plastic baggies with two sandwiches each, with the baggies linked together in two larger packs. Like many frozen breakfast foods today. these Jimmy Dean biscuit and sausage mini-sandwiches are made strictly for microwave ovens, so the heating instructions primarily cover two "states of pre-nuking" - Frozen or Thawed.  Both involve the obvious remove from the plastic packaging and then carefully wrapping the sandwich(es) in a napkin or paper towel, then placing it (them) on a microwave safe plate. The only difference is the heating time required.  **For Frozen** **Setting: **High.  **Time to heat: **one sandwich, 50 seconds, two sandwiches, one minute **Thawed: (Same settings; time estmates are based on 1,000 watt microwave ovens)** One sandwich, 35 seconds, two sandwichs, 40 seconds **Conventional Oven (Not Given in Package)** **Oven Heating Instructions:**1. **Thaw** sandwich completely.2. **Wrap** in foil.3. **Place** on baking sheet and bake at 350F for 20 minutes. **My Viewpoint: **Although perhaps this is not something I would eat more than once a week with, say, an eight-ounce bottle of Ensure to wash it down with and *not *feel guilty, I like these not so much for their taste - which is good but not as great as something from a restaurant - but their convenience.  The sausage patty can be a bit spicy if you're not used to Southern-style sausage recipes, but it's tasty enough if you're not too fussy or can't make your own from scratch.  The biscuit may taste better if you use the slower Conventional Oven heating method; it tastes okay "nuked" but, again, it's got that strange microwaved bread vibe that "real" made-from-scratch biscuits clearly lack. If you're going to fix this as part of a larger breakfast (with juice, eggs, and coffee), this Jimmy Dean product might be a nice little extra,  If you have the time, then, make it the "slow' way; I haven't tried it that way yet, but I think these sandwiches will taste much better if heated in a conventional oven.