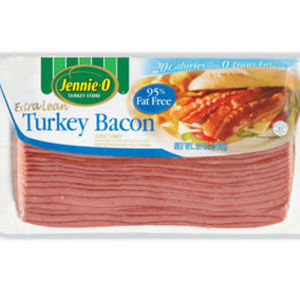 Product used to be good. However, bacon is now less than 50% the thickness it was before, making it so paper thin that you can't even peel a strip off of the slab without tearing it. It frequently comes mangled in the package before you try to peel it off. So thin you can't cook it without burning. Also fat, salt, etc. content remain the same for the paper thin slices, effectively doubling the fat, salt content for a normal thickness slice. Avoid at all costs. Whole Foods now carries a very good brand of normal thickness turkey bacon Welshire Farms, which is much better quality and much lower in fat than Jenny O.

After I had a heart attack I had to rethink my diet and while I loved bacon I knew that I had to give it up. I started buying different types of turkey bacon to see if there was anything that was comparable to 'real' bacon. Butterball and Jennie O Extra Lean were the only two that fried up nicely and didn't have a horrible aftertaste. Unlike regular bacon made from pork, this turkey bacon doesn't shrivel or shrink when you fry it. You can use a microwave bacon cooker to make this but it won't have the same taste as if you pan fry it. There's less sodium and fat to it so if you want to have a couple of extra pieces on a sandwich or with breakfast you can without feeling guilty. I tried wrapping different cuts of meat in this to see how it would cook up in the oven or on the grill. There isn't enough fat in it to moisten the meat and create a nice char on the outside of steaks or rolled beef flank steaks. I had the feeling that the turkey bacon wasn't going to cook up the same way with wrapped meat but I had to give it a try just to be sure. This does cost more than Butterball but you can get it in a couple of different thicknesses; for pan frying the thicker cut yields a meatier taste but for microwave cooking go with the thinner cut so you can get some crunch from it. The thicker sliced Jennie O Extra Lean doesn't get crunchy in the microwave and the pieces have a not-cooked taste to them.

There are some really great things about Jennie O Extra Lean Turkey Bacon. First and foremost, I enjoy the fact that it is much lower in calories and fat than original bacon. I also like the fact that it is much less salty in taste than regular bacon. I am not much of a fan of highly salty tastes. However, there are some not so great factors as well. For instance, this bacon is very thin and very easy to overcook. It has a very thin, too crisp and easy to crumble texture which, could be good or bad, dependent on what you are going to use it for. Making a BLT with this bacon is just okay. It works very well to give a quick flavor boost to a garden salad without adding too many calories. I use it for that purpose mostly. The bacon was too thin to really to really get any enjoyment from and, it lacks any real flavor. It is not something I purchase on a regular basis. I will not purchase this variety on a regular basis even though it is a healthier version. For me, it simply didn't have enough staying power for me to invest any commitment to. It is just okay.

I have tried many different brands of the turkey bacon and I have to say that this particular one is my least favorite. I switched to turkey bacon for health reasons, although the calorie difference sometimes is not that great. This bacon cooks up well, and you can achieve a crispness, which I enjoy more so than a softer bacon. The taste with this one is just not there. I don't mean it has no taste, but it doesn't have a great taste. There is just something off about it. I remember purchasing this brand a long time ago and I didn't have that same impression back then. Perhaps they have changed the product? I know that this last time I tried it, I was very disappointed with the taste. This brand was on sale for a great price and I ended up stocking up and bought four packages. It took me a long time to get through all of them. I would see it in the freezer, but move on to something else. I have actually had the same experience with this brands turkey burgers.

Jenny O turkey bacon is the perfect alternative to regular bacon for a person like me, who has to watch their cholesterol. No fat to drain off after cooking! But even if you're not watching fat content and calories, this product has the great taste of regular bacon. It may not be quite as crisp, but I enjoy it a lot.

I have eliminated pork from my diet, so I had to look for alternatives when it came to breakfast meats. I'm the kinda person who has to have some kind of meat product when it comes to eggs OR pancakes. Well, I tried the Jennie O turkey bacon and it was SO, SO, SO, SO, SO SALTY. OMG the salt that they cured this meat with or the salt that they added is WAY to much. I don't care if I rinsed the bacon off it was still salty. Also it doesn't get crispy like Oscar Mayer (which is 100 times better). This bacon takes on a weird type of chewy consistency. I have tried frying it in a cast iron skillet without any oil, I have tried cooking it in a cast iron pan with a little olive oil cooking spray, and with a teaspoon of canola oil. I have tried to oven bake it, and I have cooked it in the microwave, It will start to crisp in some spots while the other spots remain flimsy and not crisp, so you I would end up cooking it until half of the bacon would start to burn. So please Do not waste your money on this bacon. It SUCKS, Go and buy Oscar mayer, it is so much better.

tried this turkey bacon in an attempt to be healthier and had heard some good reviews, however i was highly dissapointed.  the bacon was chewey and rubbery and tasted like baloni cooked on a frying pan.  I might try a different in hopes of better results, but wont recommend this brand of turkey bacon

Jennie O Extra Lean Turkey Bacon is bacony, but not quite the full bacon experience.  If you're on a diet and really craving bacon, it works okay, but it's not going to fool you into thinking you're really having bacon. If you're not on a strict diet, you're not going to be able to replace your regular bacon with this.  It only has 1/2 a gram of fat per slice.  That's awesome.  Most lean or lower-fat or otherwise labeled diet bacon and baconesque products have way more fat than that.  Most of them are less fatty than real bacon, but nowhere near the level of dietness you need it to be if you're on a diet.  This one is actually diet. Since it's not made from pigs, it makes something baconesque available for people who would like to eat bacon but aren't into eating pork for dietary or cultural reasons.  It cooks much cleaner than real bacon.  Since it's not fatty, it's not greasy.  It doesn't pop and smoke and make a mess.  The trouble is that while it put's something bacony back into the realm of diet menu options, it's not going to WOW you.  In both texture and flavor, it doesn't have the baconyness that makes real bacon delicious.  Apparently, a lot of bacon's deliciousness comes from the fat.  The texture of the Jennie O isn't nearly as crispy and crunchy as regular bacon.  It gets fairly crispy if you cook it long enough, but still is a bit tough and rubbery. It retains it's strip shape and doesn't break apart the way bacon does.  It doesn't have the satisfying mouthfeel of bacon.  The taste is bacony and smokey and not at all turkeyish.  If you weren't told what it was, you wouldn't automatically think "Oh, this must be made from turkey", but you're definitely not going to automatically mistake it for real pig bacon.  If you tried to picture what simulated bacon designed in a lab by scientists who'd recieved extensive data on bacon, but never actually sat down and munched on some, would look, feel, and taste like, you'd picture Jennie O Extra Lean Turkey bacon.  The smell is dead on,though.  It captures the delicous smell of freshly cooked bacon perfectly.  It doesn't work well enough to want to serve it as a stand alone meat, like as strips of bacon with toast and eggs for breakfast.  The texture I think may rule it out for sandwich bacon.  A lot of the allure of bacon on a sandwich is the mouthfeel.  But it might work out well on a burger. I think it will be good in other applications, like recipes where the bacon isn't the focus.  I'm totally going to try cutting it up and using it in salads.  It will be awesome for that.  Tonight I may try wrapping the strips around chicken breasts and cooking them together like that (sort of chicken filet mignon style).  It seems like it will work awesome for that.