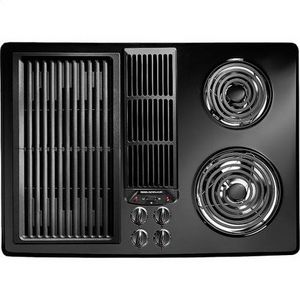 I've had my 4 burner electric Jenn-Air downdraft cooktop with grill insert for a while and love it. The grill insert isn't the easiest thing in the world to clean, but, we use it all the time especially when the weather isn't the best for grilling outdoors. The downdraft exhaust works better than any overhead exhaust system I've had in other homes and is perfect for my kitchen island location. I love that I don't have that hood hanging down in the middle of my kitchen. Would I choose Jenn-Air again--YES!

This is for the Jenn Air 5 burner gas downdraft cook-top. This cook-top requires no hood. Perfect for an island in the kitchen when you don't want a hood hanging from the ceiling. This unit has 5 burners. They are laid out with plenty of room between each for pots and frying pans. The fifth burner is one of the high output types that is perfect for boiling water in a hurry. The unit for venting sits under neath in the cabinet and then is vented through the floor to the outside. You do lose about half the cabinet space underneath, but for me this was worth it. I have an open kitchen to the dinng area, with a cantilevered bar in the island so people can sit at the bar.  So for me this was perfect. Reasonably priced compared to all the other 5 burner gas downdrafts I researched. I am very happy with this cook top. The burners are sealed so there is no pilot to go out. The grates over the burners are heavy, restaurant quality and very substantial.  The downdraft vent has 3 settings and the filter is very easy to just lift out and clean. Highly recommend!