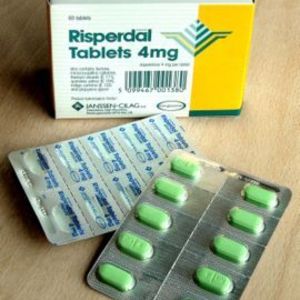 I turned Bipolar about 5-6 years ago and was on Risperdal for several years.  I was dopey and took a long time to make decissions.  But that was only the beginning, it ruined my posture over time.  My Left shoulder is permenantly down several inches and bowing in.  I can no longer wear anything that shows my shoulders because it is so off.  I also Gained about 40-50 pounds on this because it gave me a Appetite like a Lion!!  It shuts off the Full sensor in your brain, so that you are always Hungry (Starving). Really Bad Stuff!!

Three years ago I experienced a traumatic period of becoming depressed to the point of isolating myself and no longer taking part in social activities or associating with my friends and family.  My condition went from mild depression to severe psychiatric condition.  My doctor prescribed risperdal which is a psychiatric medication.  Along with therapy I felt relief and began to respond within a week or two.  I mellowed out alot it was a very tranquil feeling.  One thing I did experience was a disappearance of menstruation which was associated with taking this mediction.  Another effect that I experienced on this medication was heavy and frequent intense dreaming but I really enjoyed it.  I dreamt on for hours every night but they all were comforting interesting and exciting dreams.  I am now off the medication but I do credit it for controlling my depression.  The draw back is that it is very expensive.

My son has was diagnosed with ADD about 6 years ago.  After his diagnosis he was put on Strattera around 60 mg a day.  I started to see some results in his attention detail, but he still had bad outbursts of anger or sadness.  I took him back in to the doctor and was diagnosed with Bi-Polar in addition to his ADD.  The first thing I did was research medications for this disease.  My doctor and I were both very comfortable with our decisions of medicating with Risperdal.  He only takes 1 mg a day and it is a complete difference.  Not only does he no longer have his anger outbursts or rages but he goes to bed with no fighting.  My son would stay up all night if I would let him.  It was WWIII just to get him to brush his teeth or take a shower.  But ever since he was put on 1 mg of Risperdal per day, my days and nights of parenting are better.  I feel that I have more confidence in him that he will grow up and be a great adult who is focused, driven and has control of his temper and feelings.   Thank  you Risperdal for giving me my son!! Sincerely Brandi Schneider

*I never had an allergic reaction before. When I took this medication within an hour things started happening. I started walking wierd. Then slured speech. My arm was in a locked position. Then one side of my body was drooping.  I could not talk right. I knew what I wanted to say but my mouth wouldn't move.  It was a scarey feeling.  This is only my reaction to this medication. Everyone reacts differently. This is what I went threw and I didn't realize what was happening to me.  I had to go to the emergency room for a shot to counter act the medication.*

I think that this is might be the first time that I have publicly talked about this. My 12 year old son Ethan, was diagnosed recently with **Asperger's Syndrome**.  While most parents, hearing this news, might be panicked or highly upset, I was actually *relieved*.  Why?  For years, when I compared my own childhood to his, I knew there was something that was *different*.  Ethan processes information *differently*.  Ethan's interest in stuff is different - and I'm not talking about what he likes versus what I like. Because Ethan is shy and well-behaved, he always flew below the radar.  He is never the kid to make a fuss.  Everybody likes him.  Teachers think he is adorable. In first grade, he started having a lot of *anxiety*.  This didn't surprise me - both me and his father have anxiety issues that manifest in various ways so it wasn't a stretch to think that he inherited this gene. We had him tested for everything.  IQ?  Normal.  Hearing/Sight?  Normal.  Growing normally?  Yes.  Any of those other personality disorders (i.e. Borderline, Manic,  Schizophrenic)?  Nope.  Autistic?  Nope. He was diagnosed with anxiety and then a year later, ADHD.  For awhile, we were able to control his anxiety with medication - specifically **Zoloft** and his ADHD with medication - specifically **Concerta**. We were more or less, going along fine until we hit sixth grade.  Then everything hit the fan.  His **Zoloft** and **Concerta** seemed to stop working.  He was not doing well in school and as a mother, I felt completely helpless. In the first semester, he missed 28 school days.  Why?  His anxiety spiraled so quickly out of control that when he couldn't deal with a situation, it would make him *vomit*.  Of course the school nurse would call us to come get him and after several trips to several doctor's we couldn't figure out what was wrong. And then, *I thought about it*.  You see, when I was in fourth grade, my anxiety spiraled out of control too and my body's reaction was to break out in giant hives.  It was highly embarrassing! I sat down with the Ethan, and I started to peel the layers away.  I stopped thinking *physical* and I started thinking *psychological*.  When I explained to him what happened with me, he started relaying bits and bytes of information to me.  It wasn't like he was *purposely holding back*, he was definitely though, struggling with explaining to me, what was going on in his head.  He liked his teachers.  He liked his school (it wasn't new).  He liked his friends. I took him in to see the team that initially diagnosed him in first grade.  They tested him.  When we went over he results, I think that they were worried that I was going to get upset - because I guess - that's what happens with **Asperger's Syndrome** is discussed. This is what I said.  *"Finally!  I knew we weren't crazy.  What's next?"* I don't want to over-simplify any of the tests, my questions, or come across as flippant regarding my son's condition.  But you see, I could care less what his "label" is.  I'm more concerned with what can be done with him so that he is enabled to be successful. **What is Asperger's Syndrome**? Some people call it "high-functioning" autism.  A bettter way to describe it would be in this manner.  *A child with Asperger's Syndrome is a bit different.* - They want to fit in.  They want to have friends.  They just don't know *how*. - They may be socially awkward, not intuitively picking up conventional, social rules. - They usually have good cognitive and language skills.  They have great rote memory skills but not so good abstract-thinking skills. - They may make limited eye contact. - They may get obsessed with things - collecting them or knowing all there is to "know" about he subjec matter. **So How Does Risperdal Play Into This Equation?** After much deliberation and back and forth between various doctors and therapists, it was decided that we would try Ethan out on **Risperdal**.  Why was there so much back and forth?  Because, the FDA had just approved it for children who experienced certain symptoms associated with the Autism Spectrum.  Most doctor's - as well they should be - are extremely cautious about prescribing medication to children - especially a *newly approved* *for children* medication. Why was Ethan prescribed **Risperdal**?  Not for aggression (he's not), not for temper tantrums (he's too mild manner), not for deliberate self-injuriousness (he's never done), but for his irritability and quickly changing moods. They started Ethan on the lowest dose.  **Within 24 hours, he was a completely different child.** The changes we noticed in Ethan included: the ability to better express himself (verbally), the more thorough-thought processes he embraced for school-related items, and his general mood was more even.  On the flip side, his appetite went through the roof!  This is a known side-effect and for us, and we were thrilled that it kicked in.  Before he was on **Risperdal**, he ate okay however, he was in slim-sized clothing.  With the **Risperdal**, he seemed to eat like a normal-pre-teen and subsequently, he grew like a weed!  In no way, shape, or form is he overweight - or even approaching that.  He's at a great weight for his height and shape. **Final Thoughts** I had no clue that **Risperdal** was so controversial - that is until after Ethan had been on it for 2-3 months and after I had mentioned it to another parent.  Wow!  My parting thoughts on this matter is that prescription and over the counter medications, are a very personal matter.  One size does not necessarily fit all.  You need to do your homework.  You need to think through all of the consequences and scenarios and most importantly, you have to listen to your inner-mom voice.  I find that usually, it doesn't steer any of us in the wrong direction (for our individual child).