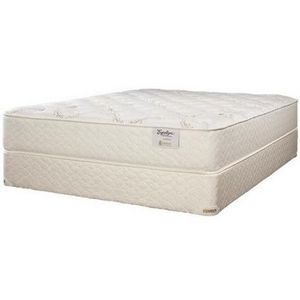 I rate this a 2/10 because of these reasons. But before I tell you them, I need to tell you that it is NOT worth the money and it is usually worse than the old mattress you are replacing! The first reason why I do not like this mattress is because you completely sink in it because it is made from latex. This causes back, shoulder, and neck pain when you wake up. It is very uncomfortable and you can not even sleep on this thing! The second reason is because it is not worth the money! This mattress was quite expensive where I live. I was very excited to get a new one, and so was my husband. We lied on it at the actual store, and we did not sink. Turns out they put something under the mattress to sell it! CHEAP! The last reason is because it is about 100x worse than my old worn out mattress. I hope, if you are going to purchase this mattress, you read these reviews. Maybe you will think twice! Comfort No! This is so uncomfortable! DO NOT BUY!! WASTE OF MONEY!

I have a Marriott bed by Jamison bedding , they havebeen making them for over years. It hs changed only in the thickness but it has always been a polyurethane foam which is not like the latex. I is the kind of foam in fine furniture and car sats etc.  The bed you purchased it a firm bed that is made for the tmost support for people that likea very firm feel. I researched tis extensively when my chiropracotr reccommeded the Marriott be to me.

The Jamison came highly recommend but this bed is worse than my bed I replaced. It is made of latex and will sink you bottom in where you will have shoulder and back problems. It will not support you at all. I found out that Marriots have these in their hotels so thought it would be a good product , but not. Don't buy.

I haven't slept well since shortly after my wife and I got our Jamison latex mattress, almost two years ago. I am a big guy (~230lbs and 6'4"), with very broad shoulders, and when we were in the store trying to pick a mattress, my number one concern was that it would eventually "hammock" out or develop holes where I lay and I wouldn't get the support I need. I expressed this to the salesperson helping us, and on her advice, we chose one of the cheaper latex foam Jamison mattresses (one-sided model, with real latex on top of synthetic). It felt great--for the first couple of weeks. After that, I noticed that I started to sleep more and more poorly, until I tried switching sides with my wife (who is tiny, 5'0" and ~110lbs). Ever since then, we have rotated the mattress once a month and switched sides with each other every week or two (as soon as I have a couple of nights with terrible sleep), and the mattress continues to provide less and less support. When I first began complaining to the furniture store where we bought it (about a year ago), they--in sharp contrast to the saleswoman's assurances that it was of good quality and would support me well for a long time--informed me that "body impressions are normal and expected with a latex mattress" and that comfort issues are not covered by the warranty. They did mention that about the time when we got our mattress (July of 2008), new fire-retardant batting/lining was required by federal regulations, and it had since turned out that this sometimes made the latex degrade much more quickly, but, despite having had them out to our house several times to measure the depth of the "body impressions," they insist that they aren't deep enough to be covered by the warranty. After complaining a bunch, they have finally agreed to contact the factory rep for Jamison--Mike Burton--to try to get them to take it and "repair" it. They have been stringing me along for weeks now, not calling back when they say they would, not being able to provide any info, apparently because Mike Burton is not calling them back, although I am assured that they are going to do something about the mattress. My guess is that "repair" means "take away and leave in a warehouse somewhere to allow the foam to re-expand for a couple of weeks without anyone's weight on it." I have not consistently slept well in a very long time. My wife and I now switch sides of the bed one or two times a week, and the mattress' support continues to degrade. I lie down and almost immediately my lower back begins hurting. I very often wake up with a lot of neck, shoulder, and/or back pain, and I toss and turn all night. My wife likes the mattress well enough, but she weighs half as much as I do, so I don't think she sinks as much into the foam. My guess is that the reason these mattresses are so popular in hotels is because the same person rarely sleeps on them for more than a week, so impressions specific to their body never have the chance to form. My advice: don't buy a mattress from a company that doesn't give a damn how well you sleep on it. If comfortable sleep isn't the entire point and purpose of a mattress, I'm not sure what is. If comfortable sleep is what all of the materials and workmanship of a mattress are supposed to be aimed at, I sure don't know why the warranty would guarantee the materials and workmanship but not the comfort of a mattress. Jamison seems to have a terrific warranty that doesn't actually guarantee anything you care about. I have heard bad things about other mattress companies' customer service, but I have lived with back pain and sleeplessness (despite having medications to help with both) for several years now, with no real end in sight, so I don't see how anyone else could do any worse. It's pretty sad that having to sleep on the couch after an argument with my wife is actually a plus rather than a minus--I sleep better on our eight-year-old dorm-worthy crap couch--which is far too short for me to actually stretch out all the way on--than on a two year old Jamison latex foam mattress.