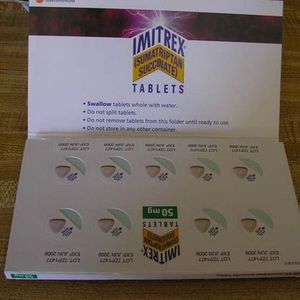 It's been a while since I was personally put on this medication. I was having migranes so bad that I had to block out all light and noise. When I was reading for a college class once the words some faded away and some I could still see but not enough to make out what I was trying to read. Eventually I gave up and I was being seen by a Neurologist at the time. We tryed several different medications until finally she settled on Imitrex. I asked "Are there any dangerous side effects." To which she replyed "No." So I took it because I trusted my doctor and what she said. About six months later when she told me I might have cluster migranes sometimes because I was having one in her office, it might happen at first. But that I should keep taking the medicine. My sister who was 12 at the time took the paper that you get with the medicine and read it and was like "Humm sis this can cause death!" I said "But I asked the doctor and she said no bad side effects." My mother checked it over because as you can well know if you've ever had a migrane, reading anything is simply out of the question. In a month I went from having a migrane every week to having one almost every other day, sometimes everyday. I went off all the medication without the doctors okay and she was very upset. I told her that I simply would not take a medicine that made me that sick all the time. Later on we found out I had a hormone imbalance that could have been found with a test and with a doctor that listened to my symptoms. A medicine I'd been put on for the Endometrosis was messing up my hormones and once I got a low dosage birthcontrol pill it subsided. I have a migrane about once every three months if that and I take a higher dosage Tylenol for it and it keeps it from being so bad and makes it tolerable. So if you have migranes I would suggest that before you try these powerful drugs you look into the tests that can be done to find out what is wrong. Sometimes the problem is underlying and can be sought out for proper treatment. I'm not a doctor so I can't advise anyone of proper medicine to take, everyones body is different. I don't do well with NSaids so I take the tylenol, for someone else something else might work better. The idea is to get a good doctor that you can communicate well with. And be honest, tell them everything, aches, pains, etc... Something that might seem significant to us, could be a arrow pointing to what is wrong. My advice is not to take this drug unless you are instructed to by a trained professional that has done the proper testing and to be wise, your body speaks to you if you listen. I for one, will never take Imitrex again.

My husband suffers from Clustter Headaches and normal drugs doesn't relieve the pain. We went to specialist after specialist. One prescribed Imitrex  and he can only take it when he feels a headache coming on. The only problem is that with clusster headaches there is no symptoms it is just dang and the headache is there. So we ruled Imitrex out until he went see another specialist and he told us about the Imitrex injection. When my husband has a headache and since there is no warning he can just give himself and injection in the thigh area and boom the headache is gone. It gave my husband a new lease for life without headaches. And it doesn't mess with his stomache like the pills did. Believe me we tried almost every presciption out there for headaches because his is so unpredictable and this is the best on the market. I would recommend to anyone with a headache and the injectable form to anyone with clusster headaches.

I use the Imitrex nasal spray for my migraines.  I have tried the pills and they didn't work that well for me.  I have also used the injectables and found the shots were too much anxiety for me.  The nasal spray has been the best for me. What I have found is that within 15-20 minutes after using the one time spray, I can feel it working.  The medication usually will eliminate my headache in about one hour.  I have only a couple of times had to use two within a four hour period.  But that was only when they were so bad I ended up in the hospital.  I do warn people who ask me about the medication, it does have side effects.  One is the hear racing.  The after taste of it when it runs down the back of your throat.  Make sure you have a glass of water handy.  There is a warm feeling that overcomes you when you use this.  However, if you have ever had a migraine, you know that these side effects are nothing compared to the headache.  I always keep a nasal spray in every room and in my purse.  Just incase I ever start to get a headache.

When I take Imitrex I am able to get on with my day. Even if I have waited to take the medicine and the migraine is severe, it only takes about 20 minutes for it to start easing the pain. Also helps with sensitivity to light and sound. Definitely would recommend if you have not tried.

I have suffered with migraine headaches for almost all of my life and I have tried a lot of medications. I have tried all forms of Imitrex and I will briefly go through my experience with each of the three versions. I initially tried the imitrex tablet and that didn't work at all. After talking with the pharmacist, he said that imitrex has the shortest half life of the triptans. And in the vein of full tranparency, I was also a pharmacy tech so I have a lot of medicine knowledge. A half life for the record is how much a medication lasts in your body (in other words, how long before its half gone.) For imitrex, it is around two hours and that is why doctor's perscribe it to be taken again if the migraines does not improve after two hours. I then tried the nasal spray which makes a horrible horrible taste in your mouth and I just did not find it enjoyable. There were times where the nasal spray and another triptan (usually frova or axert) taking one each at time and spacing them out throughout a day would work. Eventually the migraines got worse and I tried the imitrex injectables. That is an experience. The medication does work but it wipes you out for a long time and for me, it made me so dizzy, so nauseous, and so much in pain that i had to sleep. If you have the time to lay down for a couple hours after using the stat dose pen, then you could feel relief. But how many migraine sufferers actually have the time to pass out for two hours and then feel like a truck hit you. Not many!

I've had migraines most of my life, but they seem to have gotten worse as I"ve gotten older.  The imitrex comes in different forms depending on when you need it and what works best for you.  There is pill form, a nasal spray and an epi pen injection.  I myself use the epi pen.  The pill doesn't work well for me and I can't spray stuff up my nose.  When I get a migraine I usually waku up with it so it's full blown.....hence why I need the shot.  In the past I was given the pill and it would just make me get sick even more....when I finally got a Dr that knew what he was doing he told me that since I would wake up with the migraine I needed the epi pen shot so the medicine would go right into my blood stream and start working.  The only down side is when I first take it I feel drunk for about 10 minutes, but then I'm out like a light for hours and when I wake up I feel 80% better.  So, it's worth the"I'm never gonna drink again" feeling.

Imitrex is highly effective for my 47 years old husband.  Before Imitrex, he had a lot of migraine headaches in few years.  When he looks at bright white or bright red television or computer screens, they hurt his eyes and he will know that the migraine headache will come.  He quickly takes it.  After Imitrex, he had lesser migraines each year.  Right now he takes them like 2 to 3 times a year.  At the beginning of Imitrex, he took like 6 to 15 times a year.  The side effects are same since he takes Imitrex.  Sleeping and sweating are the most.  When he takes pill, migraine headache goes away in few hours (happy) better than few days (big time suffering and missing a lot of work days and events).  The costs are reasonable.  Imitrex is his first migraine headache pill.  He didn't try other medicines.  He didn't try the injections.  Thanks to the family doctor of his.  Overall, it is a life saver for him.

I would recommend the injection over the pill.  I have far less side effects with the injection.  The injection gets rid of my migraine in 30min or less and I am completely back to normal afterwards.  It gave me my life back.

I started having serious problems with migraines a little over 10 years ago. I was in a major car collision and ended up with a nasty case of whiplash. Before the accident i maybe had one migraine a year or so, but afterwards i would get them about 3-4 times a month or more. Imitrex saved my life (and sanity).  I take the 25 mg tablets and 90% of the time 1 is all i need. After taking one in about 20 minutes i start to feel sort of weird and that lasts for about 5-10 minutes. If i am tired or feeling sick if i lay down the Imitrex will put me to sleep for an hour or so. I guess the weird feelings are from the medicine causing my blood vessels to constrict. I do not like those uncomfortable feelings but within a half hour from taking the medicine my migraine will be gone. Sometimes i do also take ibuprofen for the pain but not always.  Certain foods and odors will trigger migraines for me, but if i am watchful i usually only have 1 or 2 headaches a month and Imitrex will take care of those.

I tried Imitrex for the first time 2 weeks ago, then again a few days ago. I felt no side effects except that I quickly became pain free and it worked well on my migraine headache when Frova had suddenly stopped helping. I was given a sample and was surprised to find only one pill in this elaborate case for a sample. I figured that it must be very expensive. However, when I took my prescription to be filled and handed the discount card to the pharmasist, I ended up paying nothing. So- this is a great value! I was surprised that it completely covered my co-pay. Now I am taking it as needed for migraines at the onstart. When I feel a migraine coming- I take one Imitrex and that does the trick. I usually take this at night (when my migraines are typically unbearable) so I think it does knock me out, but it is what I usually want to have happen when I have a migraine. I do feel a little bit groggy in the morning, but not to terrible.