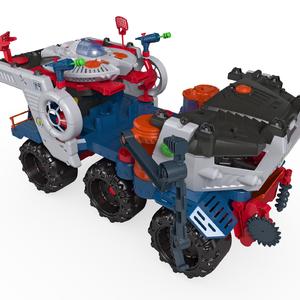 Put kids in the driver’s seat of a gigantic, alien-battling adventure!

With its awe-inspiring size, kid-activated control panel, and projectile-firing space shuttle, the Supernova Battle Rover is the perfect vehicle for engaging aliens, humans and young imaginations in inter-galactic battles that will last for hours or even days! It’s equipped with a light-up chamber that scans and detects aliens, a pull-out drill and saw blade for attacking, a crane to capture aliens, a small vehicle with space troopers to scour the area, two projectile launchers, and a huge storage area for humans and captured aliens.  Its 19 lights and more than 200 unique phrases and realistic sound effects, including engine sounds, scanners, alarms, guns, and much more, add to the space-age pretend play.  When other Imaginext® spaceships (sold separately) fire at the Rover, it responds with special sounds and phrases! The Supernova Battle Rover also serves as the launching pad for a removable space shuttle that has its own projectile launchers, lights, phrases and SFX – and can interact with the Rover!

Kids steer all the action!

The kid-activated control panel puts them in command of the Supernova Battle Rover’s movements, lights, sounds and phrases. If they spot hostile aliens, they can fire the Rover’s two projectile launchers. They can also turn a disk to raise up the space shuttle and pull a trigger to fire projectiles from its two launchers. All the while, your little space explorer will be giving his fine motor skills a cosmic workout and discovering how his actions make out-of-this-world things happen!

Discover the worlds of Imaginext®, where the stories and the play never end!

The super-sized Supernova Battle Rover will be the driving force behind all kinds of human vs. alien stories and scenarios. To add to your little one’s play experience, the Rover has multiple ways to attach to or involve other Imaginext® toys in the adventures! (Sold separately and subject to availability.) It’s all part of helping kids realize how powerful their imaginations can be in creating new and exciting adventures every time they play.  And by adding speech, sound, lights and movement, their power to imagine grows even more!

What's in the box?