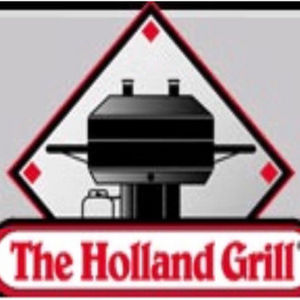 Have owned a holland grill for 10 plus years and recommend one to several people which three bought one within the last year. No more recommendations. Friend who purchased one 6 months ago was grilling recently when it flared up and then burnt enough to damage grate, drip pan, and hood. Told by Holland that it wasn't covered by warranty. Evidently their warranty means nothing. If you own a Holland just hope nothing goes wrong.

My husband and I have just finishing eating the BBQ Chicken and bake potatoes. We were very empress with cooking and easy cooking. Chicken tasted good and potatoes bake perfect.

I bought this grill on the advice of some friends. Initial research showed that people who love it, really love it; the idea of no flare-ups was a plus. I figured for the 1200-plus bucks I paid for the Epic and the Sear-Mate, I'd get a really high-quality grill. It took a while to put it together, and you have to soap-test all the fittings (this threw me for a loop...I'd bought many grills before and this was the first one where I had to do the QA). The door latch is a cheap plastic magnetic thing that broke pretty quickly. The door itself has a handy little shelf, and it has holes on the inside, ostensibly for some hooks that you would be able to hang grill tools from, but you'd need very short grill tools, and the hooks don't stay in the holes--they fall out as soon as you open (or close) the door. So that was kind of disappointing. The promotional videos on their website show people smoking meat, and slow cooking. If you fill the pan with water, you can lower the temperature to 300. That's not really low enough temperature, though, for true slow-cooking. I ended up slow-cooking for several hours in the oven, then moving the meat to the grill to finish. It's a compromise that produces OK results, but if they had an actual flame control, you could actually do some great slow-cooking in the grill. Odd how that bit of seemingly simple technology has evaded the engineers at Holland. The little smoking chips drawer is a joke. It's located too far from the heat to be effective...Sometimes it would put off a little smoke after a half hour or so, sometimes the chips would just sit there...the ones on the bottom might char a little, but most of them were still intact. Even when it did work, the smoke was just not enough; some leaked out the front of the drawer, and most of it would rise around the drip pan. Reliability sucks...I've had to replace the gas delivery system 3 times. Never had as bad an experience with any other grill, even cheapies. Don't waste your money.

I cook everything on my Holland Grill. I didn't think it was possible as most people only use their grills for meats or veggies like corn on the cob. But I have found with the Holland Grill that it is a lot like my oven. I just put whatever I want to cook on the grill, close the lid and let it do it's job. Most people don't think of making breakfast on the grill but I do. You can put biscuits directly on the grate, close the lid for the specified time and bake. You can put eggs in a cast iron skillet, close the lid and cook. You can do cinnamon rolls, gravy, bacon, just about any breakfast and not have to stand over it like you would indoors. Most of the time you don't want to open the lid because the constant heat inside the grill is what does the work. Sometimes you have to open to stir or flip but not for long. I've done the regular grilling of meats and veggies but also have baked pineapple upside down cakes on my Holland Grill and cornbread in a cast iron skillet. Experimenting with my grill has been so much fun. I also got a very nice recipe book with my grill telling me what would be some things to try. If not for this recipe book, I probably would not have tried some of the things that I've done. We also convinced my brother and my brother in law to invest in Holland Grills when they built their own homes. We all love our Holland Grills. My brother is on his second one as he gave his first one to his oldest son who went off to college last year. Keeping it all in the family!

It is so simple to use and does not require constant flipping or watching of food. It makes juicy chicken and perfectly grilled steaks every time once you get the timing down. I love how you just put it on and let it cook and don't have to constantly flip the food. It is truly a wonderful grill.

We have the Companion Grill and absolutely love it! We use it at home and throw it in the trailer when we go camping. It's small and lightweight so it's easy to set up during the winter months as well. We literally grill outdoors year round since we've bought our Holland Grill. Food is cooked evenly and never burnt. Performance Food is cooked evenly and never burnt. Steaks are awesome on our Holland Grill! Versatility Because of it's even cooking, you can cook essentially anything on this grill. Ease of Use Our Companion Holland Grill is so light weight anyone can use it. No more waiting for my husband to get home to move the grill and start it for me. Ease of Cleaning I've found that Norwex offers a product that cleans the Companion Holland Grill up quite nicely. Your grill is going to get dirty, trust me. Clean up however, is not that bad. Durability Stainless steel....now that's durability. We've had our Companion Grill for nearly 4 years now and it still could pass for brand new. Design The Holland Companion Grill is perfect for two people to cook a meal on, but if you plan to cook for more than just two people, the grill space is a little to small.

The Holland Grill is by far the most unique grill I ever came across. Ten years ago I stumbled across it at a local store and decided to bring it home and give it a shot. The best decision I ever made concerning a grill purchase. We cook on our Holland 3 to 5 times a week and have been doing so for 10 years. Every Thanksgiving and Christmas we use it with any issues. Versatility Cook anything on it you want. Sausage and bacon with biscuits and eggs in the morning. Hamburgers, steaks, hot dogs, and the best chicken wings ever. To two turkeys every Thanksgiving for 10 years. Ease of Use Turn on the gas, light the grill, close the lid, let it heat up, put your food on, and sit back and relax. How much easier does it have to be. Durability Bought it 10 years ago, and have had it in the same spot on my pier in Florida. It still cooks as great as it did the day I brought it home.

We purchased the small Holland grill last year for our backyard grilling needs. The pricepoint is high, but it is totally worth it. Everyone I know is constantly amazed when I tell them I cooked my casseroles outside on the grill instead of in the oven on a hot day. The grill keep a constant temperature inside, so you can count on even cooking throughout your food. The anti-drip pan inside keeps any flareups from happening, and the grill face is very easy to clean. We just heat it up, grab a wire brush, stroke it a few times, and all the gunk is gone. It easily adapts to any propane tank, and turning it on is a cinch. The only downside is that you really do need one of those long electric flame lighters to get it lit because the element is pretty deep inside the unit.

We really love most every thing about this grill. You can grill anything on this Holland Grill from prime rib to whole chickens. It is impossible to have flare ups with this Holland Grill. A really nice feature of this Holland grill is that you don't have to turn your steaks and burgers as they cook on both the top and bottom at the same tme. All you really have to do is look at your watch and wait the required time and they will be cooked perfectly every time. It is so nice to not have to worry about flare ups burning your meat if you happen to turn your back. This grill gives you peace of mind to tend to the rest of your meal. The only down side of this Holland Grill is that in the winter it has such a hard time getting up to the right temp that it is easier to use and indoor grill.

We first found out about this grill at a house we rented in the N C mountains..ok it was on a secluded river and everthing was wondeful anyway. BUT, I recognized a very unique product of high quality and when I checked into it an extremely reasonable price. We just finished a very big backdoor project that included an outdoor kiurned up foodstchen with a holland grill. It is just awesome, no more burned up foods. It does take a little getting used to, because  of how it cooks, but my so great to cook on. You can even close off the valve and add water to steam foods like a Boston Butt and seafoods that are wonderful. BUY ONE ! and I have no affliation with them in any way.