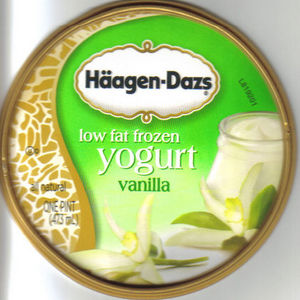 As you can tell, the ice cream and frozen yogurt sales are still raging around here and I've been stocking up so now is a good time for me to take a stand on these sweet, icy cold goodies.  Basically, here is how I feel -- fancy flavors may come and go but the real test of an ice cream maker is the quality of their "just plain vanilla."  If someone told me I had only an hour left to live and asked me what kind of ice cream I wanted, I would have to say *"Vanilla!"* and if possible *Haagen Daz* vanilla. I will admit though that I didn't hold out great hope for this healthy alternative.  It's easier to palm off something second-rate in a fancy exotic flavor when it comes to low fat but I was prepared to be fussy about Just Plain Vanilla.  So you can believe me when I say that this stuff is NOT BAD, not bad at all.  Of course, it's not as rich as the glorious original but in some ways I prefer the flavor.  Some "light" versions of things are just that -- extra air beat into them and just not as satisfying -- but this frozen yogurt has a nice dense quality which will be rich enough for most people. A single serving (defined as half a cup) contains 180 calories with 25 from fat, or 2.5 grams total fat, 1 gram saturated fat, 50 mg. cholesterol, 9 grams protein, 31 grams total carbs, 22 grams sugars, 50 mg. sodium.  Bringing up the end of the parade are 20% (D.V.) Calcium and 2% Vitamin A.  This is still a rich dessert but ... **YOU COULD DO WORSE:** **Haagen Daz Vanilla Bean Ice Cream** Alas, this is also delicious and it should be!  A single serving (half a cup) contains 290 calories (almost as much as in some frozen entrees!) with 160 calories from fat -- 18 grams total fat, 11 grams saturated fat, *even half a gram trans fat*, 105 mg. cholesterol, 75 mg. sodium, 26 grams total carbs, and 26 grams sugars.  There is less protein (5 grams vs. 9 grams) than in a comparable serving of Vanilla Frozen Yogurt and also less Calcium (10% vs. 20% D.V. in the yogurt) but a little more Vitamin A (10% vs. 2%) and even a bit of Iron (2%).  The bottom line is this -- the Vanilla Bean Ice Cream is a glorious treat but indulge in it too often and the day when you have only one hour left to live may arrive sooner than it should! **TASTE TIP:** You deserve an award for trying the Vanilla Frozen Yogurt and here is a great idea ... top with a couple tablespoons of warmed Marzetti Fat-Free Caramel Apple Dip, some fresh berries, and a garnish of Reddi-Whip Light Whipped Cream!