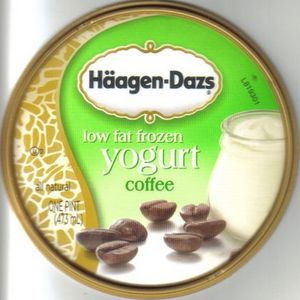 I am a huge frozen yogurt fan, but I normally don't like it when it's hard. I prefer soft serve frozen yogurt. However, I love the Haagen Daz brand and I figured I would try this. The Haagen Dazs Coffee Low Fat Frozen Yogurt was surprisingly good! I liked how it was low fat, which made me feel less guilty about indulging! It had a very authentic coffee taste. The texture was a little icy, though, which I find with low fat frozen products, as well as frozen yogurt. I thought it was pretty good though. It was great with a fudge sauce!

In spite of that fancy *[Mega Ball Ice Cream maker][1] * I bought a few months ago, I still cave in and buy the stuff which somebody **ELSE** has churned occasionally.  During a recent free-for-all sale in the ice cream aisle at Dominick's, I emerged victorious with several pints, including one I hadn't tried before ... ***Haagen Daz Coffee Lowfat Frozen Yogurt***.  I have had mixed feelings in the past about coffee-flavored desserts but I thought I would give this a shot and I'm glad I did.  This product is absolutely delightful, possessing as it does a light smooth but creamy texture and a subtle but distinct coffee flavor.  This coffee taste is mild but predominates over the sweetness of this dessert and I am not sure if young children would like this as well as other sweeter, more child-oriented frozen treats. **STATS:** ***Haagen Daz Coffee Lowfat Frozen Yogurt*** contains skim milk (lactose reduced), corn syrup, sugar, cream, egg yolks, coffee and active yogurt cultures.  Some heartless **meanie** has decided that a half a cup is enough for a single serving which contains 200 calories with 40 calories from fat.  There are four and a half grams total fat, two and a half grams saturated fat, zero trans fat, 65 mg. cholesterol, 50 mg. sodium, 31 grams total carbs, zero dietary fiber, 20 grams sugars and eight grams protein.  Also included are 4% (D.V.) Vitamin A and 20% Calcium.  This is still a high-calorie dessert but when it comes to Haagen Daz ... **YOU COULD DO WORSE:** One serving of regular *Haagen Daz Coffee Ice Cream* contains 270 calories with 160 calories from fat, 120 mg. cholesterol and 70 mg. sodium.  For some reason, total carbs are lower at 21 grams instead of the 31 for the Frozen Yogurt. **TASTE TIP:** ***Haagen Daz Coffee Lowfat Frozen Yogurt*** is delightful all by itself or as an addition to other desserts.  Make a cup of your favorite [International Dessert Coffee][2] , let it cool down to lukewarm and float a scoop of this frosty treat on top.  This frozen yogurt is perfect for a sundae when topped with *[Smucker's Sugarless Hot Fudge Topping][3] * and it goes without saying that a scoop of this would be a perfect finishing touch to the great *[Betty Crocker Warm Delights Molten Chocolate Cake][4] * which The Bard just reviewed a few days ago.  **MY VIEWPOINT:** Like I say, it may be that little kids won't like ***Haagen Daz Coffee Lowfat Frozen Yogurt*** but even if that is true, what's the worst that could happen?  .....  The kids can always eat something else and finally Mom and Dad will get to finish off a pint of frozen yogurt by themselves!  **How cool is that?**       [1]: http://www.viewpoints.com/Play-and-Freeze-Mega-Ice-Cream-Maker-Ball-Red-review-13b65 [2]: http://www.viewpoints.com/General-Foods-International-Coffees-Sugar-Free-French-Vanilla-Cafe-review-54a01 [3]: http://www.viewpoints.com/Smuckers-Hot-Fudge-Sugar-Free-Topping-review-249a1 [4]: http://www.viewpoints.com/Betty-Crocker-Warm-Delights-Molten-Chocolate-Cake-review-ef9a2