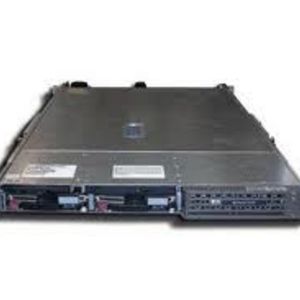 ***Bottom-Line***: If you are looking for a robust 1U rack mount server with powerful processing potential the **HP Compaq DL360 (G4)** might very well fit the bill. I have worked with all manner of server from all of the major server vendors; *IBM, Hewlett Packard, Dell*, *and Compaq*, and all offer a variety of servers to fit individual needs.  We have a number of legacy applications that run on HP Compaq 1U, 2U and 5U servers including the **HP Compaq DL-360 (G4) 1U** rack mountable server.         The **HP Compaq DL360 (G4)** continues Hewlett Packard/Compaq's long tradition of building quality enterprise-class server platforms; indeed the **DL360** line of server is one of the companies most popular and is aimed squarely at *Dell's PowerEdge 1750* line of servers.  The 1U rack-mount **DL360 (G4)** is optimized for space-constrained data center installations. The rack mount **DL360 (G4)** can be configured with up to (2) 3.4GHz Intel Xeon processors (3.0 and 3.6GHz processing speeds are all available) /w 1MB L2 cache, and 800MHz Front-Side Bus (FSB).  The server uses the E7520 chipset and is also fitted with an integrated U320 Smart Array 6i controller for control of up to (2) Ultra 320 SCSI drives (SATA drives can also be ordered), and up to 12GB DDR2 400MHz SDRAM. HP also equipped the **DL360 (G4) **with standard** **3.5" 1.44MB floppy drive, a 24X (max. speed) CD-ROM drive, and one full length and one half length 64bit/133MHz PCI-X slot, and dual port NC7782 Gigabit NICs; and integrated ATI Rage XL video controller w/ 8MB SDRAM.  Supported operating systems include: *Microsoft Windows 2000/2003, Novell NetWare, Linux (Red Hat, SuSE, UnitedLinux) and Solaris*. The incorporation of the Nocona based Intel Xeon dual 3.0 - 3.6GHz processor-each with 1MB of L2/L3 cache and an 800MHz front-side bus-represents a significant improvement over the G3 version of the server, which has dual 2.4GHz Xeons and a 533MHz front-side bus. Along with Nocona-based servers, you get Intel's EM64T chipset.  EM64T is a set of 64-bit extensions to the 32-bit x86 instruction set designed to bring 64-bit computing to the Intl platform at minimal cost. Microsoft has started shipping a 64-bit version of *Windows Server 2003* that can take advantage of the 64-bit extensions.  HP also supports the 64-bit *Red Hat* and Suse Linux, which do use the EM64T extensions. The **DL360 (G4)** also supports PCI Express, a faster bus than traditional PCI-X, but in order to utilize PCI Express, you will have to physically change a riser card on the server backplane.  And like the *DL360 G3* and *Dell PowerEdge 1850*, the **DL360 (G4)** is equipped with hot-swap power supplies; new to the model are redundant, hot-swappable cooling fans, similar in placement and functionality to comparable Dell servers. **Around the box** The back of the **DL360 (G4) **is tightly packed but efficient.  On the far left sit the (2) expansion slots and below these are a lone 9-pin serial port and VGA monitor port, PS/2 keyboard and mouse ports, (2) RJ-45 Gigabit NIC port, and ILO remote management RJ-45 Ethernet port, a single USB 2.0 port; all of which a aligned in a light abreast.  Next stacked on top of one another are the ILO Ethernet port and (2) USB 2.0 ports.  The front of the **DL360 (G4) **is a study of compact and efficient design.  The right of the chassis is dominated by the HHD, floppy, and CD-ROM drives, all of which are modular.  Next to the drive bays site four cooling vents, and next to them are placed a series of system state LED's, the power switch, and a single USB 2.0 port.  **Note:** HP has equipped the server with an additional USB port on the inside of the chassis in the front of the unit.   **Use** Because of its small size the **DL360 (G4)**'s flexibility is limited.  With only two hard drives, both of which will be committed to a mirrored set (if you are smart), so that two is trimmed to one, the **DL360 (G4) **is best suited for duty as a front-end web or application server.  Even at a maximum internal storage of 300GB, that amount of storage space is still inadequate for even workgroup-class long-term file storage; i.e. use as a file server.  I recommend utilizing the **DL360 (G4) **in the following roles:      - AD Services; e.g. Domain Controller, DHCP, DNS, and or WINS server; - Front-end Web Server; - Front-end Application Server; - Front-end MS Exchange Server; - Print Server; - General Purpose Server So what does the **DL360 (G4)** do for the business?  It runs a legacy (non-Microsoft) application for one of our specialty departments.  Since the server is running a non-database application we installed (2) 36GB Ultra320 hard drives in each bay configured for mirrored (RAID 1) redundancy.  Since being brought on-line some 2.5 years ago, the servers have never suffered a failure of any kind, which speaks volumes of the reliability of HP Compaq servers.  And it is worth noting that the server is on-line 24/7/365 with very little scheduled down-time for maintenance.       **Conclusion** Though most of our NOC is equipped with Dell servers of various makes and models, our complement of **DL360 (G4) **servers are in no way considered inferior; they very much hold their own against their black and gray competitors.  And they suffer from far less down-time.  But if one of the servers were to go down, they would be easy to service, thanks to the large number of hot-swap components.  If you are looking for a small, but robust (somewhat expandable) general use, or specialized application 1U rack mount server with limited storage potential, the **HP Compaq DL360 (G4)** might very well fit the bill.