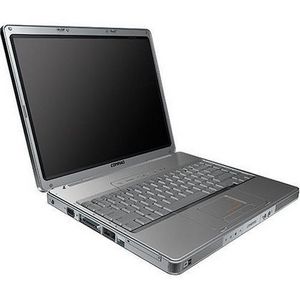 I loved this computer At first glance, it helped me a lot in the study, and I want to buy another copy of it to my brother I would like to thank the manufacturer because it is actually a powerful device

This laptop provides the user with basic productivity, but lacks in hardware.  The memory is insufficient and upgrades only to a maximum of 1 GB.  It doesn't have great graphic performance.  There is no advanced security features.  I could go on and on about all that it is lacking, but here are some of the good:- Wireless G NIC for wireless networking- Monitor expansion available- Battery-saving measures (cutting the processor clock to reduce usage)- USB 2.0 High SpeedIf all you need to do on a computer is basic tasks, this will suffice.

This great little laptop performs circles around models that cost twice as much.  I like the fact that this computer was affordable enough to make me comfortable carting it to the far corners of the globe without feariing the loss of an expensive asset.  But its performance is strong and reliable - equal to any of its more expensive peers.

A great lap top. It can be used for anything. It is great for online gaming and everything else. I have had my lap top for 2 years now and it has only had one virus. This computer at times can be a little slow, so it needs to be updated frequently. This is the only lap top that I have ever had, so I can not tell you that it is the best out of all the lap tops, but it is one of the best that I have ever used.