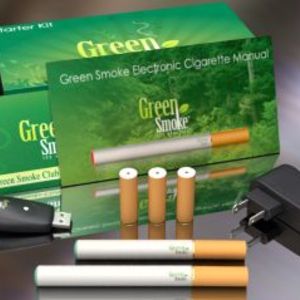 WoW!! The very first 3 days I used Green Smoke I was able to cut in half the amount of cigarettes I was smoking. And I was able to stay at that level! I am certain I will be able to quit smoking all together with this product. Nothing has ever worked for me but this sure has. AND I am not eating everything in site. All I can say is WoW!! **http://greensmoke.com/5970.html **

i think that this product is a safe/non-damageing way of being able to enjoy a cigarete and not causng the physical problems with ones body.It is a revolution to the world of smokers because it propably saved the live of thousands of people just by changin what type of cigaretes they smoke everyday.decreased air polution, healthier people.less cigarete buds on the streets.The one things about these cigaretes is that it doesint feel like a real cigarete,but insteade feels a little different and weird to firstimers who try this product.After a while though you get use to it and it becomes your savior from that unending cycle of telling yourself every day to quit and saying your done but you never stop,so you know that this will surley help you out with that problem.i hope and am also saying that this product is the future of smoking and by the time a new generation unfold children will ot have the need to smoke, because the addiciton part is gone and all that remains is a brighter future for the world ahead of us.

I was a light smoker, but over the years it grew and grew. When I planned on a new baby, I knew it would be a difficult quit. It wasn't the nicotine as much as it was the sensation that I knew would be a problem. And when I became pregnant the first days, I worked on cutting back to one cigarette a day, until I could get my e-cigarettes and hope they helped. The feeling was awful, I was so tense and fidgety and felt like I was in a constant anxiety attack. I tried nicorette and it did nothing for me. I was excited when my package finally came. I was able to throw the rest of the cigs away, I was able to not feel deprived when I was at my in-laws where my MIL is a heavy smoker, and was used to smoking while I sat and chatted with her. In fact, just having it on hand, I didn't even have to use it that often, making me think that the biggest part of my anxiety was the feeling of deprivation, like a diet. Knowing it was there when I wanted it, meant I didn't need to use it that often, so my pregnancy was smoke free! I like the tech behind it, other e-cigs seemed a little confusing, you had to put the liquid in, clean them out, and this was an easy usb chargeable, 2 piece apparatus. I like the flavors, and having a little nicotine meant that if I was suffering from nicotine withdrawals, which I wasn't convinced I was, I would get a bit to make sure that it was covered. I recommend them to everyone!

I have been using my Green Smoke starter kit for over a year now. Not one tobacco cigarette for over a year as well! I must say I was truely skeptical about this kind of product. I mean it even sounds kind of stupid right, an e-cigarette?! But look past that for what it is, a better way to smoke if you really can't stop otherwise. I had this problem trying patches and that nasty flavored gum that made me sick more than anything else. Still was smoking though. I tried SmokeStik brand and they were not too bad, one of the two batteries broke fast but I did drop a few times. Good otherwise though especially for the price. I have also heard the Luci brand is pretty good. If you want to go in style I would suggest that brand. Fairly happy customers reviewing them on the web so I put Luci in the top 4 recomendations to people asking about them. Now Smoke51 wasn't really a bad product in my opinion but just avoid their free trial offer, I got mine almost a month after orderring and then they charged me in full before getting it even. There VIP program may be a decent price save but I wouldn't sign up to it again. Over all Green Smoke has definitely been my favorite. It pulls out an extreme amount of vapor everytime and the throat hit gets stronger the higher nicotine level you order, they also have 0mg nicotine cartridges as well. Another nice thing about Green Smoke is how easy it is to use. Only two pieces to worry about. I don't get any leaks like other 3 piece designs and the atomizer is built in so you don't have to keep orderring more of those which can get pricey quick. Check out the rest of my reviews on these top 4 most reputable e-cigarette providers on the web today. Go now! http://www.sneakyreviews.com/electronic-cigarette-smoking-top-4-electronic-cigarette-reviews/

**I am writing this Review because I would like to recommend the GREEN SMOKE E-Cigarette.  I am a 52 year old smoker that has been smoking for the last 35 years.  The doctors have all recommended that I quit smoking, and they have all prescribed me stop smoking aids. That did not work may I add.  I am on a breathing inhaler and a breathing machine.  I also have COPD and Chronic Bronchitis.  I found this product online an decided to order it.  It said it had no Tar or any bad Carcinogenics that could get into my lungs.  It also said that I could order from 0mg to 16mg of nicotine.  Which I am highly addicted to.  So I started out with the 16mg since I smoke 3packs a day of regular cigarettes.  To my surprise I found that it truely works.  I am now down to the 2mg.  I am not having to use my inhalers nearly as much.  It has drastically improved my life.  I can now walk a flight of stairs with out getting winded.  I give GREEN SMOKE 2 thumbs up!!!** **Click on the Picture for website url.** ****

I had been smoking  cigarretes for about 10 years, and was convinced I would never be able to quit!  When I heard about Green Smoke I figured it was worth a try so I ordered myself a starter kit and recived it 3 days later. It has been 4 months since i recieved my Green Smoke kit and I have not had to smoke a real cigarrete since:)    This product realy works!