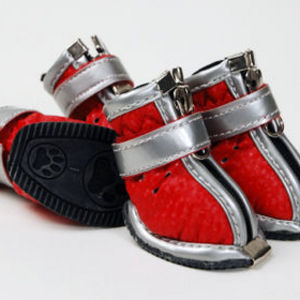 These boots are a way to waste your money.I bought my dog these boots for the reason,being an inside dog, he freezes very easily when he goes out in the snow and ice.His feet are as tender as mine and I couldn't walk around on the snow and ice without my feet going numb so I know he can't either.Being a good mom,I got these for him.Put them on and from the start they never fit him very well.He could walk less tan 10 feet and they were slipping off.Theya re too stiff also.

My dog suffers from sores on his feet from the salt during the winter time. I have to put boots in order for him to go on walks around the neighborhood. This products goes on fairly easy and tighten like they are going to stay, but take 20 steps and you will be picking up the boots and putting then back on. Unfortunately it is very cold and I do not appreciate taking my gloves off to put his shoes on every 2 minutes. This product does not fit properly to the bottom of the feet. The sizing is correct and appear to be snug when first applied, but the they let the feet slide until they are out. I would say if you need to keep the boots on this is not the brand. If you are just going to carry the dog in boots then this is your product.

My Mom's pug gets cold in the winter time.  He is very finicky able walking on snow.  So I decided to find him a pair of doggie shoes to protect his little feet.  Gooby G-Boots are the second set that I bought for him and he loves them.  They are a little expensive and come in either red or blue.  When we put them on him the first time, he tried to shake them off.  But when we took him outside in the snow, he loved them.  Now when he's wearing them, he struts around like he's so proud of them.  And if you try to take him out in the snow without them on, he will not budge until he has has shoes on.  Once he got used to them, he seems to have no trouble wearing them.  Some people may think it's silly to buy boots for a dog, but would you want to walk around in the snow with bare feet?  It looks a little funny seeing this light tan colored pug prancing around in blue doggie boots.  Another great thing about these is that when you bring him in the house, just remove the boots and you won't have to deal with him tracking snow or mud through the house.  You should try it!

These boots are great for icy weather and protect your dog's paws from the salt and chemicals used to melt the ice. I only wish they were completely water proof so that salty slush that inevitably forms on the streets wouldn't seep into the boot; the boots get damp and leak water through the zippers and breathing holes. My dog's boots lasted for two years before the fabric tore and the zippers broke. I think I'll try the heavier duty one's next year. Also, I will have to apply zipper wax or chap stick to prevent the zippers from corroding in the salt.

Our little Zakie refuses to move if his feet are too cold. He simply gives up and falls over until someone comes to rescue him. Since we live in SW Michigan (100 plus inches of snow this year) we had to do something. So we determined that boots and a coat would be the way to go. We tried several types of boots, and then several sizes. We finally settled on Medium, he is a bichon and weighs 17 lbs.  Once he got used to getting them put on, he will stride proudly about in his little red boots. This does not mean that he isnt  happy to take them off. But to allow him proper exercise when it is frigid, these boots have been great!