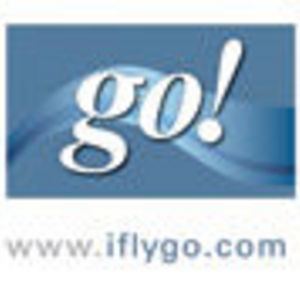 We were in Hawaii and decided to do some sightseeing on another island. Someone told us that we should check out GO Air. The price was right so we booked our flight. We had booked a morning flight to give us time to do some sight seeing and was disappointed when the flight was delayed. What really was upsetting was not knowing what was going on and if or when we would be taking off. When someone did walk through we were told that it wouldn't be much longer and when I ask about other options was told that we would be better off just to wait it out. After wasting most of our day waiting a baby plane arrived - and we filed out for boarding. I have to admit that I was not entirely comfortable flying in a plane where they ask our weight to determine where we would sit and all I could think of was I certainly hoped no one decided to lie about how much their weighted. This was not any time to be modest.. After the long delay the flight, I was surprised how short the flight was. They don't fly that high and I had fun looking out. There were a couple of dips that was a little nerve racking and I promised myself that no matter how much I wanted to Island hop, I wouldn't take this type of flight again. Service The people that I actually spoke with were nice enough. I just wasn't prepared for such a small plane and the long delay put a damper on our day. In-Flight Accommodations There was no in flight accommodations. I was just hoping to be able to find a life jacket, I wasn't worried about a soda.

Go! Airlines offers inter-island service within the Hawaiian Islands for less than most other airlines on the market. However, there is a reason for that. Go! Airlines is the ultimate discount airline. From no in-flight accommodations to seriously outdated aircrafts, I would rather take a boat than fly Go! Airlines within the Hawaiian Islands. Service The one good thing about Go! Airlines is that you can most likely always get a flight to a neighboring Hawaiian Island the day of. Most tourists are unaware of the small airline and tend to stick to the major airline carrier that they flew in on from the Mainland. There are a variety of flights offered daily on vintage planes. These are aircrafts that other airlines have put out to pasture because they are outdated and are starting to fail. In-Flight Accommodations I was surprised that we were actually offered beverages during our short flight to Kona. There were practically no in-flight accommodations offered.

The company fell short in all facets, I would never use this company again. In three flights with this company two of them have had mechanical failures and were cancelled, one of those failures resulting in the cabin depressurizing mid flight while we were at altitude. Staff was unaccommodating and rude almost to the point it was funny how awful they were. Service Again so bad almost comical, when our flight had to turn back because it depressurized during flight, they made us wait in the plane on the runway at Honolulu (while the flight attendant was outside cooling off in the breeze) and when we were baking in the hot sun with no ventilation or ac or anything a man near me who looked like he was suffering from heat exhaustion was charged 2 dollars for water, it was almost criminal that they refused him. In-Flight Accommodations again I would recommend anyone chip in the extra to go with a real airline and not use go mokulele.

I guess I am the type of guy if I have a bad experience I don't report it. ...NOT THIS TIME... My wife and I had a connection from United Airlines which was delayed, we had  a Go Airlines connection in Honolulu Hi. When I got to Go Airline ticketing area, the entire office was a complete disorganized mess. When someone finally waited on us there was a flight leaving in 45 min we were told we were too late scheduled for the 8:45 flight to Kauai. In our 4 hour wait we found that they boarded three groups of 2 after us who were on the same United flight. I returned to the counter and had to wait until the girl finished her sandwich before she could wait on me just to tell me she didn't know why. Finally the 8:45 was ready to board we had to walk about one block outside in the pouring rain to get to the plane. Take off FINALY, as we started down the runway the plane broke down and we were forced to returned, the plane was repaired and we left. The next time we make a inter island connection it definitely will not be GO. I would rather swim.

I will never fly go!  The reason:  1900 people unemployed, 1900 families affected, 1900 lives changed because one airline decided to come in and use confidential information from 2 competing airlines.  Just remember what goes around comes around!

Go! is the newest airline traveling between the Hawaiian Islands. They are operated by Mesa Airlines. They do not have a lot  of seats but they are inexpensive. Hawaiian Airlines and Aloha Airlines were charging local customers as much between islands and you would pay for a flight from Honolulu to the Mainland. Go! came into the market and offered fares as low as $9. Supporting Go! helps everyone save money in Hawaii.