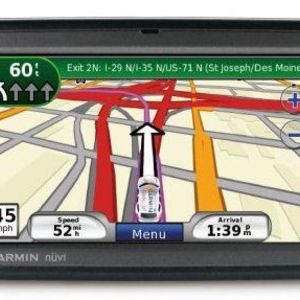 This GPS by Garmin has been a lifesaver for me on many occasions when I got lost. I love that you can personalize the settings, add personal pictures and items from the online store. Its easy to update and link to my computer when needed and holds a charge pretty well. Processing Speed Sometimes it takes a minute to load especially when you dont have full service. Map Quality & Accuracy Unless you consistently update your maps with Garmin on their website you will have just the basic maps that are installed on the GPS. However, most of the roads are accurate and up to date unless they are new. Ease of Use The menu makes it easy to access all parts of the GPS and search for different items. You can adjust it to meet your needs by changing voices, cars, colors and more.

I got the Garmin 855 on the cheap in an amazon deal a couple of weeks ago.  My previous GPS was a Garmin 650, and there are several notable differences between the two. The big selling point on the 800 series is the voice command function.  The way it works is that it comes with a small plactic reciever that you attach to your steering wheel.  When you want to issue a voice command you simply hit the button on the reciever.   For example, if you were on the road and wanted to get something to eat you would hit the button on the reciever and then say "Find nearest restaurant."  A list of the nearest restaurants will pop up on the gps with numbers beside them.  You say the number of the restaurant that interests you, and say "Yes" that you would want to go there.  It is fairly straitforward, and as long as you speak clearly the gps is good about understanding what you are saying. Another cool thing about the 855 is that your speed and the actual speed limit are posted on the bottom of the screen while driving.  The change in speed limit is spot on; the very second you pass a different speed limit sign, the speed limit on the GPS will match it.  It's easier to pay attention to your driving when you don't have to look by the side of the road every few minutes looking for speed changes and road signs.    One final difference about the 855 is that it comes stocked with some fun games... although I don't know if having good games on your GPS is particulary wise, I still see it as a benifit nonetheless.

I've had the Garmin Nuvi 855 for about 6 months now and all-in-all I think it's a relatively good GPS.  But it does have some annoying and sometimes very annoying quirks.This is our third Garmin, my other one is a hiking Legend Hcx and my wife owns an earlier Nuvi model.This 855 is a good size but not so large you can't slip it in your pocket if you're walking.  And it does have a walking mode, in addition to the car/SUV mode and a bike/motorcycle mode.  So you can use it off-road if you want to, like if you're hiking, walking in the city or country, or using it for Geocaching.  And remember - you can use any GPS for Geocaching despite what some people might tell you.The screen is large, bright, and colorful and shows your upcoming turn as well as current speed and the current road's speed limit.  Occasionally, like on a military reservation it may not show the current speed limit but otherwise seems to have good coverage in this aspect.You can also switch from a 3d perspective view to an overhead view, as if you were looking at a paper map.  And you can zoom in and out, scroll around with your finger on the touchscreen, and even select a new destination via tapping the display at a new location.Of course, you can either use the touchscreen or the voice command to select your destination, by address or category.  Garmin's maps are very thorough and quite accurate.  Of course no GPS (nor paper map) is going to be 100% accurate, but if you find yourself at an incorrect location it's easy to re-calculate and find another route.You can also pick route and area avoidance, like if there's a detour or section of a city you want to avoid.There are many options, settings, and things you can do with this including some games, currency converter, and a real good media player for music and photos.  You can even have playlists and control it mostly by voice command.The voice command is amazingly accurate, and uses a small module that you can attach to something; like your steering wheel.  I find that I don't use the voice command quite as much as I expected to, but this is personal preference and works very well.You can also search for any categories or add a new destination anywhere along your route, only near where you are leaving from, or only where you are going.  Any of these choices can be selected.The GPS itself comes with a mount, charger, voice command module.  You can also charge GPS via a USB cable either through AC or a computer.  And the USB doubles as an intercace for transferring to and from the GPS and a computer.  Yo ucan use Garmin's Mapsource or MS Streets & Trips or any of a number of other pieces of software out there for creating waypoints, destinations, POI's, routes, etc. There's also a port for a memory card.There are some downfalls to this GPS.  Garmin decided to no put an actually off switch on it.  There's a switch that turns it to a standby mode but if you don't use it for a few days the battery runs down.  I tend to pull the battery out when I don't plan on using it for a bit.  An annoyance, and not sure why Garmin would build it this way.  At first I thought this was a malfunction in mine until I saw some others mention it in forums on the Internet.Occasionally I've had it lock up completely to the point where I have had to pull the battery.  This is seldom but happened a few times.  Again, a common complaint with others who have this model.It also doesn't come with Bluetooth, but a corresponding model number does.Despite these annoyances it's a very good and accurate GPS, I'd semi-recommend it only because of the annoyances.  Otherwise it would be a full five stars.

I bought the Garmin Nuvi 855 as an upgrade to my aging Garmin Street Pilot C340.  Since these are the only two GPS units I have used, my review will mostly compare one to the other.  The Nuvi 855 has a much larger screen and offers a few new features that make it much better to use.  One such feature is when you are in unfamiliar territory the Nuvi 855 will show you a picture of what the exits look like and will show you which lane to be in to take the exit you need.  The other most helpful feature is to be able to block a road from the route entirely, this is a feature that only a few Garmin's have.  Sure all Garmin's can "detour" if the road you are on has a problem, but the standard 'detour' feature just takes you a couple miles futher down the road and routes you back to the road you detoured from very quickly, so if there is a 9 mile backup on a highway, you will not detour around it with one detour.  If you exclude the backed up highway from your route entirely then recalculate you can detour from the blocked road for the rest of your trip.  It is pretty easy to lookup the basic features list on Garmins site, but it hard to know exactly how you will use those features in real life.  These are the two that matter most to me in real life use.

The Garmin Nuvi 855 is a good wide screen GPS. There are a lot of neat features included with this GPS like lane assist during intersecting interstate junctions, voice activated navigation, multi destination routing, photo viewer, MP3 player and all the standards with the preset maps. The wide screen is wonderful! It is able to be seen in sunlight as well. The voice activated navigation leaves A LOT to be desired. It comes with a control that is mounted on the steering wheel. Unless the inside of your car is VERY quiet and your car has NO road noise, then you will need to hold the remote control/microphone directly in front of your mouth for the voice recognition to be able to understand what your command is. It is a very neat feature but very frustrating to use if you're in a hurry while driving. I have not used the lane assist feature but I hope it is as neat as it appears to be in the description. I have had trouble with my GPS keeping a charge. This may be a manufacturing issue and not standard with all 855 models.

Garmin Nuvi 855 has many great features such as voice activated navigation, lane assist with junction view, turn by turn directions that announce streets by name, a high-resolution 4.3" touchscreen display, a high-sensitivity receiver with hotfix,  and nearly 6 million points of interest