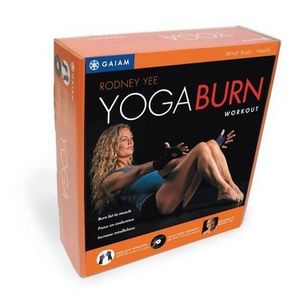 ***Quick View:*** I am not a die hard yoga practitioner by any means but I was intrigued by this kit. It includes a DVD and weighted gloves for a slow, effective upper body yoga workout. ***About The Gaiam Yoga Burn Kit*** First, I have to say there are a few versions of this kit. The one I have includes weighted gloves and a DVD that is 40 minutes in length led by Rodney Yee with a woman doing all the actual movements. Another kit has just the woman with Rodney voicing over the workout and the gloves. And yet another has just a 60 minute workout with Rodney Yee and no gloves! The workout is the same but the difference is who is actually doing it and whether you get the gloves with the kit. Having said that, let's talk about these special weighted yoga gloves. They are one size and that size is small. They pull on with finger sheaths and have a row of pockets around the wrist area. They come with 12 one quarter pound weights which you can insert into the gloves (six each up to 1.5 pound total each glove). The weight lies on the wist area which isn't the most comfortable place for it to be. The gloves go up about four inches above the wrist and have a sticky textured palm for postures. Getting  the gloves on and off is much more challenging than the entire workout! The workout I have has master yogi Rodney Yee front and center talking about each move, correcting the posture and position of the woman doing the workout, and really participating throughout. You will need a yoga mat for this workout. With the gloves on and the amount of weight that feels comfortable to you, you will be taken through a series of slow sweeping yoga postures focusing on the upper body and core. Nothing is super difficult to do although some poses do demand upper body strength like the cobra, downward dog, upward dog, and others. But the pace is so relaxing and slow that it doesn't seem like hard work. It feels relaxing. At the end of the workout, there is a comforting relaxation part where you simply lie still and breathe then turn to your side for more relaxation. It's a short segment but a really good one to end the workout. When you are done, your upper body and abs will feel it. Although this is called **Yoga Burn**, it  really doesn't burn during the workout. After you're done, your body knows it has been challenged and worked, though. This is NOT a cardio workout. I only burned about 85 calories during the 40 minute workout. But it stretches the spine, challenges the balance, works the arms and whole upper body, and is a great to many yoga postures. Rodney Yee is wonderful during this workout as he walks you through every move and reminds you to take everything very slowly. It's hard to slow down when you're used to working out fast so that is a challenge in itself. I love the workout but I hate the gloves. They are so hard to get on and are not comfortable. The weights feel so heavy on the wrist and so unyielding. And getting the gloves off is a true chore. I have to tug at each finger about three or four times each to get the gloves started and then I can yank them off. My recommendation to you is to buy the **Yoga Burn** DVD alone with Rodney Yee doing the workout and use your own weighted gloves. The sticky palm is nice to have but not necessary if you have a sticky yoga mat. If you do buy the kit with the gloves, prepare for battle getting them on and off. Larger hands will NOT fit into them either. I have relatively small hands and I don't think the gloves would fit if my hands were a tiny bit larger. ***My Viewpoint*** The workout is awesome and such a change from the usual. The gloves bite. 4 stars for the workout. If I were rating the gloves, they would get 1 or 2 stars maximum. But in all, I am staying with ***4 stars*** because I think anyone who does this workout will benefit from slowing down and doing the poses. But who came up with the design for those gloves? Yikes! *This is my 1100th review! 1200, here I come!*