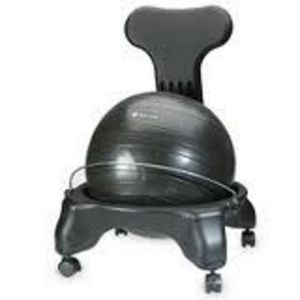 The Gaiam Balance Ball Chair System is a wonderful way to improve posture while you work at the computer. The chair is made from a balance ball and comes with a pump to keep it inflated. I've found though that I only have to inflate it a little bit each month. It took about 100 pumps to inflate it when I first got the chair, so not much work. An added benefit, though, is the booklet of stretches and other exercises that can be done using this chair. Side stretches, twists, bends and yoga poses help to remind me to take 10 minutes to exercise and stretch for every hour I spend working at the computer, as many internet sources recommend. The ball part of the chair is buoyant enough that my neck doesn't get as kinked. The sturdy 4-wheeled base means that there's little if any chance of me falling off the ball while I am working. The only thing I have found that I need to be careful about is placing a foot on top of the ball. This is a good exercise for balance but the first time I tried that I fell off. Now I make sure I hold onto my desk while balancing on the ball.

The ball chair, in my opinion, is an item you'll either love or you'll hate the first few times you use it. We have these at the gym where I work, so we decided to buy one for my office and desk space at home. While I love the ones at work and am used to sitting in them during my shift, it's a whole different story when I try to use one in my own home. The one thing I didn't consider was the amount of time I spend at my desk when I'm on the computer. At work, I'm always up and down from the chair so it doesn't ever get extended periods of use. However, at home, I generally spend 2-3 hours a day doing paperwork and getting online. This long-term use of the chair really takes a toll on my back. There is a backrest, but when you try to lean on it, it seems to give way and doesn't have a lot of support. This forces you to sit up totally on your own (which I know is the point of the chair) and after awhile my back begins to hurt from having so much pressure put on it. The good things about this seat are that it is very comfortable. The ball has never deflated on us, even after my 225 pound husband sits on it. I would recommend putting this chair out of reach to children, though. Our kids instantly thought it was a bouncy ball for them to jump on and we've had many booboos due to that. It's definitely a nice chair, though, and really gets the job done if you're looking to strengthen your core muscles.

*This does exactly what it promises to do if you do it! I had to strengthen my back and it worked. It is very durable sodon't worry about busting it. I will have to tell you...be careful, bc I almost hurt myself when I first started to use this.You can take the ball and use it seperately. My suggestion though is get something less pricey. I am sure you can find something that promises the same results cheaper. *

I work at a job where I spend about 50% of my time sitting at my desk or at a computer. i dont have any lower back or hip problems, but didn't like the fact that so much of my time was spent sitting in a chair. I tried using a balance ball alone for a seat, but this was very difficult, although I can say it worked my core very well, but I was very uncomfortable and had a hard time concentrating on my work. There was no stability in it and when I wasn't sitting on it, of course, it just rolled away. I found this product on-line and thought it would be a good compromise. It fixes all of the problems with using a balance ball alone. It is comfortable and stable, and I am able to get my work done. It takes some getting used to, but you definitely need to work your core while sitting on it, so you are killing two birds with one stone- getting work done and strengthening the most vital muscles in your body.

How awesome is it that while working at my computer I can also work my core muscles?!?!?  Had heard for years that sitting on a balance ball would help posture and core muscles, but not being very coordinated was afraid to try.  So when I got an e-mail offer on this chair, I figured I would try it.  The chair gives you so much more stability (which I need) and it is very comfortable (which I love)  It does take a while to get used to, got of kind of work your way up to 8 hours a couple hours at a time.  But I feel a huge difference and my posture has improved so much that my sister asked if I got taller!!

I'm shorter in stature and have a job in a technology company that requires me to sit for long periods in front of a computer. In addition to the occasional tendonitis and lower back discomfort, I recently suffered a pinched nerve in my neck that radiated through my right shoulder all the way to my hand. I was already concerned with how sitting for long periods of time would exacerbrate this condition, but also knew that when seated, my posture wasn't always the best. As well, my core is weak and could definitely use some toning. So, after a friend posted on a social media site that she'd purchased a Gaiam Balance Ball Chair System, I was intrigued. And after doing a bit of research online and with friends, I decided to purchase one of my own for use at work. The base and back are relatively easy to assemble, and though a bit bulky and oddly shaped, they are light. I found that the plastic connectors (large screw-like things) did not fasten evenly and had to wrestle a bit with them before getting the back connected to the base. It takes a bit of patience, but once you get the hang of it, it's easy. The ball itself is a bit smaller than the average exercise or swiss ball. That's because it gets some height from the base and doesn't need to be quite as large as a ball that is independent of this kind of system. The system also comes with a pump to blow up the ball and is quite easy to use. The fact that you can't lean back on the back rest is not a negative to me, because one primary purpose of this system is to keep the core engaged. I find that even now, as I sit in a regular chair, I am sitting straighter and keeping my core engaged. I really love this chair, and have noticed a great difference in not only my posture, but an overall firmness through my core and glutes. And speaking of glutes - beware: sitting on this chair requires keeping the core and glutes engaged, and can literally be a pain in the butt - in a good way:)

this ball chair has saved my back, and my backside!  i am a writer and i often sit LOOOOOONG hours at the computer. when i finally get up, my back reminds me of my slouched posture in every move i make. this ball chair not only provides a cushion-y seat for my tailbone, but it also helps keep me from slumping over and creating a mess for my chiropracter. the angle of my pelvis makes it more cofortable to position my spine in an upright positio. i can even sit crosslegged and still feel balanced. i am short (5'2") and so i left the wheel off so that the height of the chair wouldbe more suitable. my office is carpeted, so i don't miss the mobility. i ind that i can scoot the chair back and forth fairly easily anyway. i also like how easy it is to take the ball from the chair to use in exercises, and simply pop it back into place to sit. the back of the chair is a mystery to me, though. i can't imagine any person being long enough to sit comfortably that far back in the chair. you certainly can't lean on it, anyway.   i'm happy with this purchase. i only wish that it somehow fit into the decor of the room better :)

My employer subleases in a nice office that is fully "green" (eco-conscious) but their office chairs are awful (even though they paid a fortune for them).  No one there likes them, and it seems that everyone suffers some kind of pain or ailment from sitting in them.  For me, I quickly developed hip pain, no matter how I finangled the chair's adjustments.  I saw the Gaiam Pilates Balance Ball Chair on their website, and noted the many positive reviews it had received.  I admit I was still quite skeptical; however, the chair was on sale and I could return it if I didn't like it, so I decided to live dangerously and try something new.  :)  The chair arrived quickly.  One noncritical part was broken and the extra ball I ordered did not ship.  I note that, upon calling the company Gaiam about these issues, they were super-nice and quickly took care of everything.  There is no getting around the fact that the chair looks odd in an office setting.  I felt like people might think I was trying to hatch an egg.  :)  Nevertheless, the chair really works.  It does take some getting used to (It took me about 3 days to really adjust fundamentally, and then about another 2 weeks to work out the ideal height for me - adjusted by inflating/deflating the ball).  I've been using it for about six months now, and I have no hip pain etc.  The ball is an extra-sturdy one (apparently these types of Pilates balls come in different thicknesses), and I feel secure on it.  The only thing I dislike about the chair is that the base is creaky/squeaky.  It's plastic so I'm unsure if there is something I could do to remedy that.  I understand the company recently came out with an updated chair base too which may be better.  Everyone is quite curious about my chair, and I was just told that "Dr. Oz" (the t.v. talk show doctor) apparently featured the chair on his television show as being "the best chair you could use" (or words to that effect).  It's supposed to keep your core (midsection) working throughout the day.  What I like is that you feel more of a sense of flexibility and movement.  The only other thing I would share is that, for me anyway, when I go to sit down on the chair, I like to back it up against something else first, to avoid any risk that it might shoot out from under me as I come down on it.  But I think I'm just overly paranoid or something about that.  :)  Like any chair, if you're interested, it's probably a good idea to try one before buying.  However, if you've tried sitting on regular Pilates Balance Balls, well this is exactly the same thing, only in a rolling chair base.