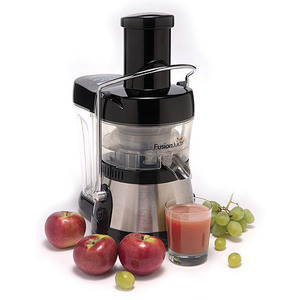 I purchased this juicer from an online shopping portal as the website offered a great deal on this product. I have just started using this product and I just love the overall design of this juicer. It has a stainless steel body and black coating which enhances the look of the product. The juicer has a non-drip spout and has a superior extraction technology. I tried making raspberry and grape juice with this product and many cocktails as well and I was pleased with the result. The juice pulp was thick and sweet and the complete fruit gets crushed within the juicer, thus leaving a clear liquid of fruit juice. The juicer is less noisy while in operation. The juicer is light in weight and it is extremely easy to clean the interior and exterior of the juicer. The durability is good enough. This product comes with a recipe book as well and I have tried only a few recipes till date.

I bought this on an impulse buy from an infomercial at like 2am. I wasn't sure of the decision because I had never had a juicer or hadn't followed the media coverage and trending topic of juicing. I didn't really believe it would do everything the infomercial said it would do, and I didn't believe it was as easy to use as they showed it to be. I had never seen a juicer in real life so I was shocked when it arrived and was much bigger than I had expected. I had expected it to be the size of a blender. I began to experiment with it and found that it was super easy to use. it did everything the infomercial said it would, and exactly the way they showed. it juiced beets and carrots like they were nothing. It was amazing! Its not too loud, its nice and fast, its easy to use and easy to clean. I put some of my fruits and vegetables in whole without cutting first. some of them I leave the skin and peels on and that too works fine. My only minor complaint would be the pulp container tends to fill up and back up quickly.