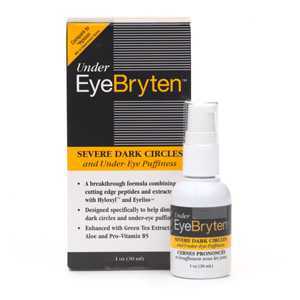 I've looked for various under eye/dark circle products and let's face it, most don't work and are over priced.  The hydroxine product was way too expensive for me, so I looked for a product that was less expensive but seemed to have some potential. Eye Bryten is a white cream that comes in a small pump bottle and you apply a thin film of the creme on the dark circles under your eyes, which many of us struggle with.  You should use it daily, and really twice a day for optimum results.  I found that there was SOME improvement in the darkness of undereye circles.  Nothing dramatic and it could be that the result was because the cream itself is white and maybe I was seeing a reflection of that underneath makeup.  It also has a good moisturizing and/or tightening effect which certainly can't hurt in improving the undereye area, so for that reason alone, it's a helpful and rejuvenating product for less than what you'll pay for the really high-end undereye treatments.  I also think it depends on your skin type and many variables, so it's impossible to say how it might work on any particular individual but I think if you're on a budget and want to get Eye Bryten a try, it's worth a try. I felt my under eye area looked better after applying makeup over the thin film of Eye Bryten.  A little goes a long way too, so I didn't use a lot for each application.  So, I would rate this as "average", and even if you don't see dramatic results with your dark circles, i do feel it has positive effects on the sensitive undereye tissues and circulation.