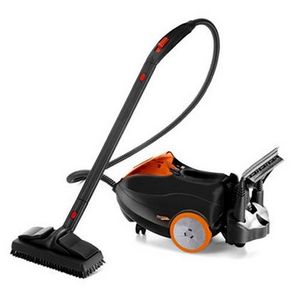 The Monster Euroflex Steam cleaner is a hoax.  I tried to clean patio furniture with no luck.  The representative with whom I spoke said I should use a brush.  I told him that had I wanted to use a brush, I would not have bought the steamer cleaner.  I've been scrubbing the patio furniture for quite a few years.  Not a lot of fun.  I wanted the Monster steamer to clean as it was advertised to do and it didn't even loosen the dirt, much less remove it.   I'm not particularly interested in sanitizing my patio furniture - just wanted it clean without a lof of work on my part. Did not remove soap scum from bath tub either and there was NOT excessive build up on the tub.  This should have not been a problem in light of the advertisement.  Again - if I had wanted to scrub the tub, I would not have bought a steam machine!!! Tried to use the floor cleaning accessory.  Quite cumbersome and had to refill several times. - What a joke that was.  I could have mopped it and been done with it. Overall the machine is not user friendly.  Power cord does not detach from the unit and there is no water level window. Representative indicated that I was not being truthful when I stated that although I had had the machine for over 30 days, I had not been able to use it because of weather and I had purchased it primarily to use outdoors.  Said I could not return it because the limit was 30 days.  I didn't use it but ONE day but I was not to be trusted to tell the truth.  I was not allowed to return it for a refund.

I had previously purchased an H2O steam mop and I really loved the way it cleaned. But just a few months after i got the mop, it broke. So I wanted to get another steam mop but another brand, one that might last. I thought the Monster steam mop seemed to be a better choice than the Shark because it had continuous steam. The Monster also offered a special steam trigger to release extra steam if needed, and four different steam settings. So I ordered the Monster. When I got it and first used it, I was disappointed in the water capacity, because this affects how long the steamer coud be used. Also, you had to wait for the steamer to cool down before you could add any more water. This makes a 30 minute job take about an hour and a half. The mop only came with one pad for use with the carpet glider, while it came with two for bare floors. The pads get wet quickly and then don't pick up any more dirt, so it would be nice to have a bigger supply included. I do like the fact that the pads are washable, rather than having disposable pads. This is very earth friendly. But the mop can only do small jobs. I want a mop that can clean my whole house rather quickly.

I had been hearing about steam cleaners, but never paid much attention to them. However, I decided to purchase one after seeing an advertisement for the Monster Steam Cleaner. I'm not sure exactly what made me decide to purchase one, but I believe it was the fact that it promised to clean and sanitize practically any surface. Not only would it clean and sanitize, the advertisement said, but it would also make the chore of housework that much easier. That's all that had to be said for me to want to purchase one. I love a clean house--in fact, I hate clutter and can't stand to see dirt and dust on household surfaces. But with that said, I hate to actually clean! In other words, if I could have a maid to clean and polish at my service, I would be in hog heaven. Unfortunately, I do not have that benefit and therefore have to do it myself. That means I'm constantly looking out for the newest item to come on the market that promises to make housework a breeze--hence my reason for purchasing the product. When it arrived, it looked exactly like the photograph  but it does feel a little heavier than I thought it would be. I was able to hold it with one hand so it's not too heavy, but my elderly mother had a hard time holding it up. As far as the product is concerned, it came with a nice storage bag and several attachments. I wish the bag contained a small pouch in which to place the attachments but other than that, the storage bag is great. The cleaner is very easy to use and in fact, I hardly had to read the instructions to figure it out because it's very user friendly. With all the good going for it, I am a little disappointed. First of all, it took me up to 3 refills to clean my bathroom. According to the booklet, each refill lasts approximately 30 minutes; however, in realty, I don't believe it was that long. For the first refill, I was only able to clean around my toilet floor, the outer toilet basin, and along the edge of the wall and then it quit. When it quits, you have to wait at least 5 minutes to allow it cool down and release any built up steam by depressing the  steam release. Then for my second refill, I was only able to clean the edge of  my bathroom floor opposite my toilet (my toilet and bathtub/shower combo are in a room the size of a closet---very small)  as well as  my tub/shower. Then, had to wait another 5 min and refill a third time. I was finally able to complete the rest of my bathroom which sits outside my "closet", and was able to clean my vanity and sinks and floor edges before it quit on me. It did clean but I still had to do some scrubbing. Maybe I was wrong, but I was under the impression that the dirt would just disappear, but unfortunately, that was not the case. I still had to scrub rinse my cloth out several times to get everything sparkly clean. Overall, the product is good. I mean it does put out a lot of hot steam and it did actually get up a spot off my bathroom floor that for a long time I was never able to get up.  My biggest complaint is I just wish the steaming would last longer because it was very inconvenient to have to stop and start so often. As much as I hate cleaning, I want to get it done, not have to stop midway through. I plan on keeping the product and will be using it again.