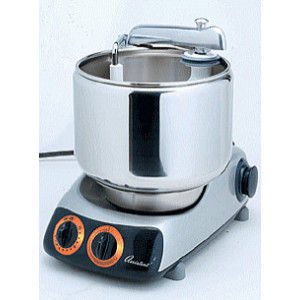 This stand mixer is a true monster!! It is arguably the most powerful home stand mixer on the market in terms of the monster size of the bowl!!! It meets and exceeds all of my expectations!  Made by Electrolux, an illustrious company in Sweden, this machine has been around for many, many, many years and it has been proudly adored that length of time by serious European and Swedish home cooks and bakers alike!! It was first known in years past as the Magix Mill Assistant. Now, it's known as the Electrolux Assistant DLX-2000.   It makes short work of practically every mixing job with ease. This is no mere run-of-the-mill mixer!! It's a very serious one and it likes to do its job very well! It is very unusual and funny looking in that it has it's large powerful motor works in the base of the unit, much like a direct-drive food processor does. It powers the drive train and transmission through a drive belt linkage. The trasmission in and of itself, is housed in a separate metal gearbox! And unlike most other stand mixers that use an over-the-bowl motor head, this machine does not have that! Which means that you are free to add all your ingredients to the work bowl with no obstructions whatsoever! The powerful 600-watt motor (more power has been added to it) is the most powerful in any home stand mixer! IT HAS MORE THAN ENOUGH power and torque to plow through the heaviest bread doughs, cookie doughs and and heavy or stiff batters with the greatest of ease! It won't bog down. It's the only home stand mixer on the market that can handle bread recipes containing a whole 5-lb bag of flour at once!! Try doing that with any of the other home stand mixers, and their motors may become overloaded, overheated and burn out!!  The uniquely designed roller beater has sort of a spiral fluted technology which helps to mimick the doughs and batters as though you were using your fingers to gently mash and knead the dough.  This phenomenal arrangement mixes and kneads the dough or batter far better and far more superior than the competition that's out there!!  The bowl scraper which hangs over and into the work bowl helps take care of any unmixed batter by keeping the sides of the bowl clean and free of any unnixed dough. You'll NEVER have to scrape the bowl during mixing!! And even when you're ready to empty the bowl, there's even a supplied scraper for THAT! What else could be easier?  During mixing, simply move tension arm with roller beater attached toward the center of the bowl now & then briefly, to take care of any unmixed portions of dough or batter that might be there. It also powers a vast array of accessories availible as optoinal equipment!  It can also handle yeast bread recipes containing up to a whopping 5-lb bag of flour!! No other home stand mixer in the world can make that claim, say that or even can ever do that!! Their work bowls are just not large enough, nor is the power that they have stronger or sturdy enough!! Comes with a very heavyweight heavy-gauged highly polished huge capacity 8-qt stainlesses steel work bowl - the largest one for ANY home stand mixer! Also has a unique roller-scraper beater combination that gives superior mixing qualities, a large dough hook for larger batches of dough and a 6-qt plastic bowl and a drive shaft that is used to power the double-whisk assembly.  Angled lighted dials, variable speed control and a timer knob that allows mixing up to 12 minutes! Machine is double-insulated, eliminating the need for a 3-prong cord. ANY SHORTCOMINGS AT ALL? My only shortcoming is that this mixture is estremely expensive! IN SHORT: This monster of a mixer is no joke and it really means business!! It really gets the job done! I truly love big powerful heavy duty monster food prep appliances!! And THIS one definitely is a true monster! It truly excels with its phenomenal track record and it gets the job done!! I don't like any of those wimpy flimsily-made cheap lightweight mixers that end up broken in about 6 months! Great machine!! And it also has a very heavy die-cast metal base! It's now also availible in two exciting new colors- Frosty Blue and Champain!!  However, I must also make it known that the machine is very heavy, bulky and that it strongly demands a considerable amount of kitchen real estate. CHOICE OF COLORS: In addition to White, Grey, Chrome and Black Chrome, there are now two additional new colors; Champagne and Frosty Blue! Choose any color to match your kitchen decor as you please!   Thank you for reading this review.   ~Daquan13.

The Electrolux Assistent (yes, it's really spelled that way; it's foreign) is one of the few stand mixers that does well with whole grain products. I use mine almost daily, especially for bread, and it's a wonderful time saver! As the mother of two young children, I appreciate that I can just toss in my ingredients, set the timer, and walk away until the bread dough has risen. (Well, I do come back and remove the attachments and cover it with a towel, but that takes less than 30 seconds.) This is as effective as a bread machine, but allows for making multiple loaves of bread at a time, and is far more versatile. It can whip cream or churn butter, mix cookie dough or whip up cake batter. All of this is done on a very sturdy all-metal base with a powerful motor. Some vendors push other mixers because of their higher wattage, but a lower wattage is actually more desirable if it gets the job done (which this definitely does!) - it uses less electricity! Although I have heard that this has something of a learning curve (because the roller-and-scraper combination, which is terrific for bread, is a bit unusual), I have never used any other stand mixer so this was never an issue for me. Although we are usually on a tight budget, this versatile and long-lasting piece of equipment is well worth the investment!