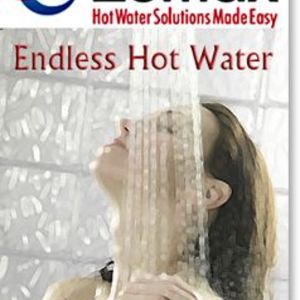 We purchased a condo one year ago...which had the eemax tankless unit already in place. We thought at the time...how cool...until the first shower!!! We discovered that you must run water for SEVERAL minutes before actually getting in the shower. You will get warm water but it will then give you a blast of cool water before it can recover to hot water again. So you must let it run to avoid the SHOCK. May be efficient on electric but NOT on water conservation!!! Just a couple of months into our life here we started getting lukewarm showers.UGH...these units have two heat elements...one went out...new element 150.00...lasted four days...out again. so enough of that...we replaced the unit 527.00 in April of this year cost 275.00 for new install We learned that any interruption of water supply could burn out an element if there is air or sputter in the hot supply. So we always turn on cold water first to be sure. There has been a few times when condo building has had work done on water. So we would turn breaker off on heat elements run water for several minutes before turning power back on to the heat elements!! It is December and we are back to lukewarm showers again. That was enough for us!!! At 8:00 last night we had guys here installing a water tank and cost us 795.00 So save yourself the headaches and the cost involved. This was an expensive lesson learned. The installers last night told us the only good tankless are gas supplied units..doesn't matter what brand it is...none of the electric ones work very well.

Even using the water restrictors and aerator that it comes with, I still had to turn our incoming water valve down because it couldn't heat the water enough. I don't mean scalding.. I mean even to get above warm. I live in vegas, it practically comes out warm on its own yet this couldn't heat it up where it should be until pressure was a trickle. Also it varied in temp as it cam out. I purged system before turning on etc. Now a little over a month later and the element has burned out. The last unit had the entire heat exchanger blow up which leaked water onto the board and you can imagine what happened after that. I only bought this model again for a direct fit.

EeMax makes a large line of electric tankless (instant) water heaters. They are primarily meant for heating domestic hot water and are sized to meet demands ranging from 1 bathroom to whole house residential and up to huge industrial sized units. I chose a medium sized one that was specified as suitable for accepting pre-heated incoming water. This type is intended to be a booster or have the heated water re-circulating through it, e.g. to maintain the temperature in a hot tub. I chose this type because I wanted to use it as an electric boiler in my home's heating sytem, replacing the ancient and inefficient coal and oil fired one already here. I was happy with the customer service I received before the sale (I had a lot of questions). I was also happy with the price, design, apparent quality, ease of installation and the amount of hot water the unit delivered initially. However, in the first week, 1 of the 2 heating units failed. Several phone calls to their customer service guided me through fairly easy diagnostics and they mailed me a free replacement of the suspected defective part. But that didn't fix it. Then the second heating unit failed with the same symptoms. A different tech at the factory desided it was the main circuit board and sent me free replacements. This time they even over-nighted them. I replaced both the bards and had trouble free heat for the next eight weeks until one of the units failed again. It looks like the same symptoms, but I haven't had a chance yet to verify that, nor to call the factory again. They've been nice and tried to be helpful all along, so I expect they'll offer more free parts (it's under warranty, after all), but this is getting old. Also worth noting (though it wasn't mentioned in any of their sales literature nor by their reps during my pre-purchase questions) -- it makes our lights flicker. Since ours has 2 heaters in it, it pulls 240V power through 2 pairs of 40 amp circuit breakers. When the incoming water is fairly cool, both heaters are on a lot of the time. But as the returning water gets warmer, they cycle on and off faster and faster, sometimes in unison. When one gets up to around maybe 15 cycles per second it starts to cause a noticable flicker in any lights that are on. When the water is almost hot enough, the flicker speeds up almost fast enough to no longer be noticable -- but not quite. When both are in unison it is strong enough to be pretty annoying, even when fast. At first, 4 of our neighbors also had flickering lights, but the power company installed a new transformer that serves only us. Now ours are not as bad and theirs don't flicker at all. For these reasons, I am wondering if I chose the right brand. My application may be different enough to think that it would be fine in it's main intended usage. But I am not the only one to use this type of device this way. And 2 reps had opportunities to warn me off in my pre-purchase phone calls. They knew what I planned to do with it, said it would work fine and that I was getting the right size.

This company is horrible!! We ordered one for our one bedroom condo, were told by customer service it would work great in the Northeast! Nope! It was loud as it went through the stages, first day the one of the heating elements was not working, had both licensed plumber and electrician makking sure it was all good. Got it up and running still very LOUD clicking to each stage, then hot would come in and out water pressure in and out, then hot would go to cold after 6 mins! Then if thats not enough, they overnighted me a new heating element, yet still the same issues, called explained I wanted my money back the customer service said no, as it was already installed. He said they would need the unit back to test, and see if my Licensed plumber broke the unit then depending on that maybe give me some money back! Finally after going through BBB I was able to get the money back!

We have the Eemax EX280T2T and love it. The wife loves extra hot showers and she has a red glow when she gets done. We can run the dish washer or cloths washer and still take a nice hot shower. My unit did come with the older style heater elements. They did have a small design flaw but it has been corrected on the new models. the unit is extremely easy to service. Trouble shooting takes 10 minutes, swapping out a heater takes 15 minutes and tech support is super helpful. I would highly recommend this companies products.

Purchased commercial Eemax unit for my restaurant and have had it replaced 2 times and am now waiting on third relplacement in 9 months. It has been not working more than it has been working. There are very few technicians and plumbers that know how to work on the unit and have been given the run around till im absolutely DIZZY this time. Go with another company!! Actually had an Eemax guy YELL at me on the phone saying he didnt install it so what did I expect him to do. This is the same man who gave me his personal extension nuber 2 months ago and said if no one came out to fix it call him directly and he would take care of it! Well here it is 2 months later and still not working and leaking water all over the place. BUYERS BEWARE OF THIS COMPANY!!!

Eemax knows "something" isn't right with their heaters -a one year guarantee only. I have two Eemax heaters and they BOTH do not perform well. - I have been in construction almost 40 years and NEVER had a problem like this, and it's in MY new house: You can NOT get an extended warranty  It keeps tripping the breakers Hot water is SLOW and it's about 15 feet from the heater. Our electric bill is HIGHER We changed out the faucets to keep temperature/flow control - twice If your water flow is low the water is COLD - I have to keep turning it off to get hot water. Hot water comes only at the full water flow Wastes water It is NOISY This is our biggest regret in building our otherwise dream home. You have been warned.

Was advised by plumbing supply house to buy Eemax tankless water heater to replace an older one that had died after 8 years of perfect service. The one they recommended turned out not to be the right one for the application, and Eemax customer service suggested the 190TC. This one arrived with an internal leak.  As long as we had to replace it and wait another day, we ordered the upgraded stainless steel unit that has a digital thermometer.  This one arrived with an electrical problem.  The 190TC has little blue stems that you have to turtn to adjust the maximum temperature. This is so low tech, it's unbelievable.  So after a week and a half with no hot water, we switched distributors and brands and bought a Stiebel Eltron unit which is fantastic. It makes Eemax units (all three we had were the same internally) look like a moped, next to the Stiebel Eltron which looks like a tank.  Eemax cuxtomer service is terrible as are their quality control standards, with 2 of 3 units leaving the factory with problems.  Glad now that they were dead on arrival because if they hadn't been, they probably soon would have died.

I purchased an Eemax whole house electric water heater about five years ago and overall I am pretty happy with it.  I haven't had any experience with other brands to compare it with but its well built, was easy to install and performs well.  I had a lot of problems with it at first.  The heating elements would burn out, a PC board blew and I had to replace a triac.  It would work for a week or two  and then something would go on it.  I screwed around with it like that for about two months until they finally sent me a new replacement heater and I haven't had a problem with it since.  I must have just had a bad one.  The customer service was great.  They were good about getting parts to me at no cost and fairly quickly and their techs are pretty good at trouble shooting over the phone.  It was frustrating in the beginning but like I said I'm happy with it now and would probably buy another one.