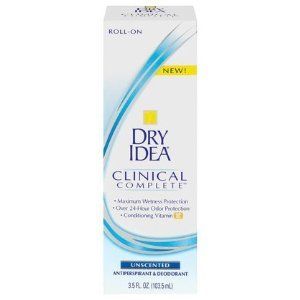 I have struggled since teenagerhood with a very sensitive and profuse perspiration response, to the point that I could feel my underarms dripping just from being nervous someth=imes, and they would saturate and ruin my clothes.  It was embarrassing and so frustrating!  I was put on the prescription antiperspirant, Drysol, which did help to curb the excessive sweating.  Then, I heard about Dry Idea coming out with Clinical Complete, so I tried it.  It absolutely works just as well as my prescription did!  It goes on with a slippery, but dry feeling that I love because it is not sticky at all like Mitchum is.  If it gets on my clothes, it does dry white, but it is easily removed with water only.  It lasts all day, even through my high intensity one-hour workouts.  I have never had another top or blouse ruined.  And, I can also use it right where my legs connect to my body, and it helps with that persipiration as well.  If you suffer from excessive sweating, this product is so worth the money!

I had gotten a great deal on this dry idea clinical complete deodorant, I decided to try it because it was summer and I seemed to be a little more sweaty than usual. anyways I was excited to try it. The first day that I had used it I could still smell some funk, well you know. I was thinking that it was just me because it was hot out and all. Typically I get a scented deodorant because I likr to be able to smell the freshness. this deodorant did not keep me dry nor did it keep me smelling fresh. I had bought a few of them since it was a good sale, I gave one to my sister as well. I offered her the other bottle that I still had and she would not even take it. She said that she had the same problem, not keeping her dry or  fresh. I would not recommend spending the money on this, it does not work. On top of that I do not even need to use clinical strengh so you would think that this should have been able to really get the job done. I was sadly dissapointed. not a good product, and a big waste of money!

Truth in advertising is a very improtant issue for consumers who buy goods for sale on the open market, for which Dry Idea Clinical Complete (unscented) fails to deliver.  After all, what else does the consumer have to go on, but what the manufacturers state in their advertising.  With that trust factor in place, I actually broke out three times under and around my armpit areas after the use of Dry Idea Clinical Complete (unscented) before checking the list of ingredients on the product's reverse side.  It took three episodes, because I am a multiple allergy sufferer (breathing, contact, food and medication) and I somehow convinced myself that something else must be the cause of my outbreak.  It just couldn't be my ***hypoallergenic unscented*** antiperspirant. I know that some people prefer unscented products, because they wear perfumes or colognes and don't want multiple scents competing with each other in their nasal passages.  However, most people who use unscented products do so for medical reasons out of a need to avoid an allergen that may cause them to develope irritating hives, welts or rashes.The Dial Corporation (a subsidiary of the Henkel company), that manufactures Dry Idea Clinical Complete (unscented), sells many personal care products and has been in business for far too many years to not know the difference between lightly-scented and unscented.  Their use of the words *unscented and hypoallergenic* to describe this product are misleading the public.  The term unscented implies no fragrance, at all.  However, after carefully scrutinizing the "inactive ingredients" listed for this product I learned, much to my dismay, that my unscented antiperspirant does contains fragrance.  The fragrance is of such a mild degree that it can go unnoticed unless you place the opened product directly under your nose.  However, Methyl-Di-bromo Glutaro-Nitrile is a known allergen found in all inorganic scents and fragrances, therefore this mistake or oversight is inexcusable on the part of the Dial Corporation.  Still, their use of the term deodorant does suggest that there might be some agent involved to mask odor, but the product can only be one or the other, scented or unscented, it can't be both that's just out and out deceit.  Furthermore, Dry Idea Clinical Complete states on its' lable that it is an invisible solid, but that is not entirely true either.  It goes on as a filmy white residue, which takes several minutes to dissipate to a state where it is no longer noticible.  And, sometimes it prevented wetness and sometimes it didn't.  Well, in my case anyway.  On that note, can the consumer also trust that the product contains vitamin E, as stated.  I don't know if I can ever fully trust Dial products again, after this flub.  At best, this product rates one star.

When I saw the words "Clinical Complete"  I expected this Dry Idea to offer extra protection.  What I found is that it was only as good as the ones without this terminology.  It is hard to find roll ons, which is what I prefer, so I was very excited when this was introduced onto the market.  The cost was substantially higher but I justified this with the anticipation of finding a more effective product.  I put it to the test while vacationing in Florida this year.  I traveled in August when humidity was high, relying upon my new purchase for added protection.  I was dissappointed, finding that the non clinical version had worked just as well for me in prior years.  Dry Idea Clinical  Complete roll on applies nice and smooth, leaving no residue just as the less expensive version does.  It did not however offer me the additional protection which I had hoped for.  I will not be purchasing the Clinical Complete formula again as  found no evidence to support the price difference.