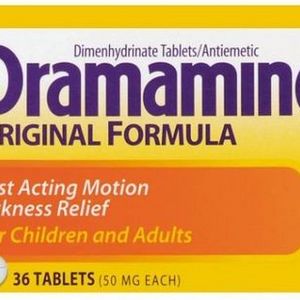 I get car sick very easily when there are hills. I get VERY sick fast. I had not tried Dramamine until just a few mouths ago and it works very well. I like to get the one that makes me sleep so I don't get bored. I also like that the packets come with so many tablets, then I can share them with my sister who also gets car sick. Dramamine is one of the better buys for a good price.

My dad had two daughters instead of sons, so he decided to expose us to all of the manly things that he would have done with sons.  We went to golf camp, football games, baseball games, and on many summer fishing trips.  I always did well on the large party boats that go out around here, but I couldn't handle the smaller boats.  The love of fishing was instilled, though, so when we planned our recent trip to Mexico we booked two fishing trips on a charter.  I packed a couple of vials of *Dramamine* in addition to the sunscreen, bathing suits, and beach towels.  *Dramamine* is a "fast-acting motion sickness relief" with dimenhydrinate as the active ingredient.  It prevents diziness, nausea, and vomiting.  The directions state you should take it 1/2 to 1 hour prior to activity and the suggested dosage is 1-2 tablets every 4-6 hours.  I erred on the side of caution and took 2 tablets an hour before getting on the boat and took another one after 3 hours out on the water.  Our first day out on the water was extremely rough with 10-15 foot seas and often reminded me of one of the ending scenes of The Perfect Storm.  I was somewhat afraid that vomiting was a very real possibility for most of the trip, but it never happened.  I even managed to reel in a 60 pound mahi mahi, though I must admit to feeling extremely nauseous after getting it into the boat.  My hands/fingers were no longer working, so I had to have my husband open up the little vial and get out another *Dramamine* tablet.  I used it again a few days later on our second trip.  The seas were much calmer but I stuck to my 3-tablet regimen again just because I didn't want to be stuck out on the water feeling ill.  Luckily that wasn't the case.  *Dramamine* worked extremely well for me even when I spent 6 hours out in very rough seas.  I will definitely buy this stuff again when I plan another fishing trip.

My family has been using Dramamine for years and we are constantly recommending it to people. My mom discovered it many years ago when she first started having migraines and needed something to help relieve the nausea and now we all use it. It works great for mild nausea, migraine nausea, and motion sickness. It really helps settle my stomach. I have found that the trick is to take it as soon as you feel sick to your stomach so that it has time to work. I know that they make a less drowsy version so if you tend to get drowsy from certain medications you may want to try that version because the original may make you drowsy. I always have this prodcut on hand because I do suffer from migraines and I do get nauseated from them. It's great because if I can get a dramamine and a pain releiver in my right away it saves me a costly trip to the doctor for a shot. That's why I love that this prodcut is a very effective over the counter medication. I really recommend this product.

You won't need Dramamine if you are on a boat in a bay most likely. However, if you are going on a smaller boat out on the open ocean, I suggest you bring along this medicine just in case. I was VERY glad I had it when I was out there. People were throwing up over the side of the boat and really I started to feel pretty dizzy and sick. Just nausea and seasickness starting. I felt it, and took the pill and very soon I felt all good and fine. No more feeling sick at all. Its probably important to take it as soon as you start to feel yucky though, in order to prevent the throwing up part. Some people just take it no matter what, when ever on a boat. It makes you sorta sleepy so I only wanted to take it if I really needed it. Do what you want. They have a non drowsy version but I never used that one so can't review it. This one does work though. And its not like I was so drowsy that I was falling asleep on the boat. I was awake and fine. I don't remember feeling tired at all actually. If its daytime, and you had enough sleep, you probably won't.

To be completely honest, I have only used Dramamine a few times.  I get terrible terrible car sickness but usually I remedy this just by driving.  However, the first time I flew, I found that I also get airsick. Yay.  I felt miserable the entire trip.  I have taken Dramamine when I have flown since (though I do not fly that often).  It does take away my nausea and I sleep most of the flight.  This can be nice if you are also nervous about flying as I am. The unfortunate part of all this is that it made me so drowsy that I could barely stay awake after the flight.  I ended up leaving my jacket at the airport the first time.  I felt like I couldn't wake up or be very alert at all.  I was really really out of it.  If I wasn't traveling with other people to keep track of me, I don't think it would have went very well. I found the less drowsy formula does not work as well and does make me less drowsy... unfortunately less drowsy was still pretty sleepy. However, I still take it when I fly because it is better than feeling horrible the entire trip.  Just be warned about the total lack of alertness.

Although Dramamine is commonly used for motion sickness of various flavors, its anti-emetic properties can be applied to a whole host of other stomach related issues causing unwarranted nausea grief. I speak in particular of nausea related to food based allergies, lactose intolerance, and acid indigestion. With bad acid reflux in combination with multiple nausea-causing allergic reactions to common food products slipped into nearly everything edible around here, Dramamine is probably the only reason I can manage to have an appetite at all some days. Within 30 minutes of taking one, those greasy waves of nausea roll out to sea and dissipate entirely. They generally do not return since Dramamine's duration is sufficient for such temporary problems (though with things like a stomach flu repeated doses would likely be required every five hours or so). The biggest complaint most people seem to have with this medication is the drowsiness, but I find it midly pleasant for relaxing the stress and irritation caused by the nausea in the first place. I'm generally only in danger of falling asleep from it if its close to bed time anyways. A little known fact of interest, however, that would stop most drowsiness complainers cold: Hallucination is another significant side effect of Dramamine when taken in larger than necessary quantities. So much so, in fact, that this innocent over the counter nausea relief aid is often misused recreationally for its hallucinogenic properties. So parents that find Dramamine in a teenaged son or daughter's room might want to think a little deeper as to its possible implications...

I took this medicine before a long road trip and I couldn't fight the urge to sleep the whole way there. The drive was quite scenic and I missed it all due to sleeping, but at least i didn't feel like throwing up.