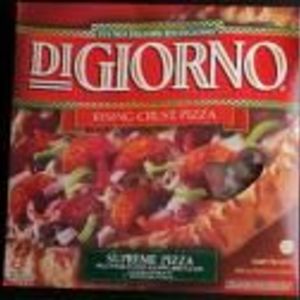 One of the best out there

DiGiorno did it again with this Supreme Pizza.This pizza is SO flavorful. It's topped to perfection with high quality toppings- pepperoni, Italian sausage, red/green peppers & flavorful carmelized onions. Every bite takes you to flavortown. Has a hand tossed taste/texture and tastes authentic and delish. The crust is thick, fluffy and chewy, however, I sometimes prefer a crispier, crunchier crust therefore had to leave my pizza in a few extra minutes (about 5-10 minutes) for my desired results. The end product was perfectly cooked and delicious. My kids, hubby & I all really enjoyed it. I'm definitely going to be buying more next time I go food shopping. If you need a quick & easy dinner that'll be sure to fill your family's bellies & please your palettes for a super reasonable price- this is for you. It's a really Great frozen pizza to have on hand, and the price point is perfect. Trusted Quality brand, with great quality ingredients. * I received this product for free, in return for my honest feedback. All opinions are 100% my own.

This is the best pizza alive! I used to buy small DiGiorno pizzas with rising crusts. They were good but the crust was too thick. One day I took a chance and brought home a DiGiorno pizzeria! pepperoni style. OMG! It is fabulous! These pizzas are not huge so if you have a large family, you need to buy more than one. If you suddenly find yourself with a taste for pizza, you don't have to order out. Just bake it at home. We always put it on the middle rack to bake and take it out with a pizza pan underneath it. It feeds two people well. But more than that? Order a second one. We ALWAYS have at least one of these pizzas in the house.

I have used this pizza many times and loved it. It is a good frozen pizza to have on hand. I have noticed that in the past little while they have changed this pizza a bit. There are extra seasonings on it and the sauce tastes a little different. I had heard that it had changed and didn't know if I would like it as much, but surprisingly I love it! I like the crust on this pizza. It is soft inside and crispy on the outside. It has a lot of toppings and cheese that others tend to lack. All around it just has a really great taste for a frozen pizza. I tend to make homemade pizza at home, but sometimes I just want something easy and fast if I'm in a hurry or just want a simple dinner. I think the main problem that I have with this pizza is that it can be expensive. Depending on the store you go to you could almost get a carry out pizza at an actually pizza place for around the same price, especially if you are buying multiple pizzas. Sometimes I will get these anyway, but I usually wait until they are on sale. It is a good pizza though and cooks well!

When DiGiorno first hit the market I was more than a little skeptical about it tasting as good as something cooked in a pizza oven; while it isn't exactly the same taste, if you cook it on the rack or on a pizza stone you are going to get something that is pretty close. I usually have a couple different DiGiorno pizzas in the basement freezer when the boys want something late at night; the toppings cook up perfectly and the peppers aren't soggy. The supreme version has sausage, pepperoni, black olives, onion, red bell peppers, green bell peppers and cheese on top of their signature sauce and crust. Depending on the type of pizza you like you can have this on the table in about 25 minutes; I like mine with a crispy crust so I bake it on a bare rack in the oven for about 25 minutes then turn the heat off and leave it in the oven for another five minutes. If you want something that is softer you can bake it on a cookie sheet. A suggested serving is one slice (1/6th of the pizza) and contains 350 calories, 15 grams of fat, 1,010 milligrams of sodium, 40 grams of carbohydrates and 16 grams of protein. For me the sodium is the killer; I can handle the calories and carbohydrates but if I have two slices of this it's almost my total allotment of salt for the day. This is high in protein but when I make one of these at home I usually have one slice with a salad so I don't go back for a second slice.

I normally order pizza for my family at the local pizzeria or make my own from scratch. In order to save on time and .money, I made a decision to give frozen pizza another try. After past experiences of cardboard taste and fake cheese, I have to admit I was a little scared. But, I had heard good things about DiGiorno, okay I took the chance, plus I had a really good coupon. I bought three rising crust pizzas, one Supreme, one Two meat, and Pepperoni. I fixed the Supreme as soon as I got home that evening. I followed instructions for cooking on the oven rack. When it was done, I noticed how nice the cheese melted evenly across the whole pizza, and was bubbly.It looked really inviting. I took it out of the oven with a pizza paddle, and cut with a pizza cutter. The blade glided right through the crispy crust, the crunch and the aromas after the cut were delightful! I almost hesitated to take a bite thinking about how things appear, could be deceiving, but ooh, I am so glad I bit into a slice. It was delicious! I experienced, velvety cheese, not gummy goo, and savory meats and fresh tasting veggies, all on a crispy bottom and chewy end crust that wasn't cardboard. My family was appreciative, giving great reviews. In the following weeks, we tried the other flavors, and weren't disappointed. DiGiorno doesn't exactly taste like delivery, but it is pretty darn close, close enough that my family and I won't mind having it again.

I would have to say, this is a really good pizza, it's not the best but it's still really good. It's not as pricey as some pizzas are. It is still does cost a little bit more than others that are pretty good as well. I love the thick crust the rising crust has it's just enough of a crust to topping ratio and they certainly don't skimp on toppings, there are plenty!

The DiGiorno Supreme Rising Crust Pizza has been a family favorite for years. The crust is always nice and crispy and it always rises perfectly. Inside the thick crust, the dough is light and fluffy. There are always a lot of toppings and cheese on the DiGiorno Supreme Rising Crust Pizza, and there is always the perfect amount of sauce. We usually have to buy two of these pizzas whenever we make them because my family always comes back for more slices!

DiGiorno Supreme Rising Crust Pizza is one of the better frozen pizzas I have found without paying too much more than less expensive brands such as Tony's and Red Baron. When I'm looking for a pizza that's as good as delivery without having to go to a restaurant then I'm going to buy DiGiorno. And I've never felt short-changed after making this purchase. The Supreme is loaded with ingredients including sausage and pepperoni and compares well to the DiGiorno's 3 Meat pizza. The Supreme has a thick crust flowing with tomato sauce, very tasty with mushroom, red onions, green and red bell peppers. I feel like I'm getting alot more than the other brands I've tried. As with most of the other DiGiorno pizzas, the Supreme crust is outstanding. I feel comfortable taking a few slices to work because it's definitely a huge meal. I've read that the sodium content is a bit on the high side, and because the DiGirono Supreme is so essentially filling, the calorie content is also much higher than the usual frozen pizza. But in spite of these drawbacks to the health conscious, it's one of the best bets for a medium-priced frozen pizza.