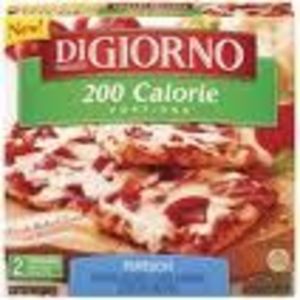 I've reviewed several other DiGiorno products that I've tried. I like to keep my diet low in fat when I can, so I figured I would try these as well. Please, save your money! The DiGiorno 200 Calorie Pizza Portions are just as gross as the regular pizza. Also, they're super tiny! It's not really a low fat pizza, just a smaller pizza. It doesn't fill you up at all. Also, the advertising is kind of false advertising. It makes it seem like it's a diet product and it's not. I did not care for it at all.

I love the DiGiorno Pizza's and now that there are 200 calorie options I love them even more. In a box you receive two pieces of pizza, one serving is one slice. They are the best frozen pizza option out there. It comes in a microwaveable tray that makes the crust nice and firm and not limp and soggy like some of the others. The sause has a nice sweet taste to it. I have had a couple of different flavors and love them both. The smell of them alone is enough to bring people onto the room to see what you are making because it has a wonderful aroma. I have often made one of these for myself when the rest of my family is eating a full of fat and calorie delivered pizza. The portion size is great and one slice fills me up as well as it is a party in my mouth of wonderful flavor. I stock up when they go on sale and have introduced the product to co-workers and now they can enjoy a yummy silce of pizza!

I heard about the new 200 calorie portion pizzas and thought the chicken w/peppers and onions would taste good for a quick lunch. I was pleasantly surprised when it was crispy, warm and delicious to me. I don't usually purchase frozen pizzas due to the crust texture usually being off when we cook it, thank goodness it wasn't soggy or over crispy. It is now a lunch favorite.

As a longtime resident of the Chicago area, I've ended up knocking back a lot of pizza over my lifetime ... all kinds of pizza baked by all kinds of people.  When it comes to pizza, I know what I'm talking about and so I had high hopes for any kind of pizza which could boast having only 200 calories per slice.  It was too good to be true, I thought, and I was right.  ***DiGiorno 200 Calorie Portions Pizza ***have a lot of good things going for them and they taste great but, as far as I am concerned, they aren't really **pizza**. **WHAT THIS IS.** ***DiGiorno 200 Calorie Portions Pizza ***consist of two individually wrapped portions which include a shiny cardboard for heating up in the microwave if desired.  The portions are oblong pieces of thin crust -- about twice the size of Saltines used to be -- topped with delicious ingredients.  The two flavors I bought were ***Pepperoni*** and ***Chicken with Peppers and Onions***.  **STATS:** A single portion of either flavor contains 200 calories with 80 calories from fat, 9 grams Total Fat, 4 grams Saturated Fat, zero Trans Fat, and 1 gram Fiber.  ***Pepperoni*** contains 15 mg. Cholesterol, 520 mg. Sodium, 21 grams Total Carbs, 10 grams Protein, 6% (D.V.) Vitamin A, and 10% each Calcium and Iron.  ***Chicken with Peppers and Onions ***contains 20 mg. Cholesterol, 470 mg. Sodium, 22 grams Total Carbs, 2 grams Sugars, 11 grams Protein, 2% (D.V.) Vitamin C, 15% Calcium, and 10% each Vitamin A and Iron. **MY VIEWPOINT:** A single serving of ***DiGiorno 200 Calorie Portions Pizza ***is really just a nice cracker topped with a dumbed-down but delicious version of the sort of toppings that have made DiGiorno famous.  For those who want a cracker topped with pizza ingredients, then I can recommend this and even give it four stars -- but I'm from the Chicago area, and as far as I am concerned, this isn't really **PIZZA**.

I really like pizza, but most pizza is loaded with calories. I haven't been too satisfied with many of the healthier pizzas, but tried this one because I had a coupon. I was pleasantly surprised with how good it tasted. I will definitely buy this product again.

I received a free product coupon to try the Digiorno 200 calorie pizza. I bought the cheese and tomato version to have a quick and light lunch one day. The package contained 2 pizzas with a serving size being 1. The pizzas themselves are very small, about the size of a tv remote control only not as thick. I followed the directions for cooking in the mircowave. The pizza came out with a firm crust, not soggy as you would imagine from the microwave. The cheese seemed to be sparse, which may be how they got it to only be 200 calories. The taste was similar to a cracker with pizza sauce on it. I appreciate the fact that I got a free lunch for only 200 calories but in the future, I will stick to regular pizza.

Pizza is one of my absolute favorite foods, but like most delicious things, it's high in fat and calories.  When my friend told me about a new pizza that only had 200 calories, I went on a mission to find it.  At last, I found **DiGiorno 200 Calorie Portions Pizza**.   I was under the impression that the small box housed one single-serve pizza, but it actually contains two small, rectangular pizzas.  I was a little surprised at how small these pizzas were.  They are even smaller than Lean Cuisine or Smart Ones pizzas. To heat, simply place pizza on top of the included silver tray and heat in microwave.  I bought the *Cheese & Tomato *flavor and really enjoyed it.  The crust was pefect; thin and slightly crisp, but not too crunchy.  The pizza sauce was really good too, as was the cheese & tomato flavor.  The tomatoes were chopped in small pieces, just the way I like them.  I was a little disappointed by the amount of cheese, but I understand it's that way because of the pizza's low calorie content. Was I full or even satisfied after eating one of the small pizzas?  No.  I heated the second pizza in the box immediately after I finished the first.  Each pizza is approximately the size of a small slice of delivery pizza.  If you are normally full after eating only one slice of delivery pizza, you would probably be satisfied be eating one of these pizzas.  I on the other hand, can eat two or three slices of delivery pizza, so yes, I did eat the second pizza in the box as well. The *Cheese & Tomato ***DiGiorno 200 Calorie Portions Pizza **contains: 200 calories, 9g fat, 15mg cholesterol, 440mg sodium, 1g dietary fiber, 9g protein. Was the pizza delicious?  Yes.  I loved it, that's why I gave it 4 out of 5 stars.  Do I need to eat both of them to feel satisfied, yes.  I guess 400 calories isn't so bad, just not exactly the 200 lunch I thought I was getting.  I would definitely buy them again though, they were that good.

**DiGiorno** did an excellent job marketing their new **DiGiorno 200 Calorie Portions Pizza **before it was even available in stores.  I'd seen it promoted both online and in print ads via the coupon inserts in the Sunday newspapers.  I already had several coupons clipped and ready to be redeemed and was just waiting for the pizza to arrive at my local grocery store. I'm not usually that excited about an upcoming product but since I'm a huge pizza lover, I was really looking forward to finding a pizza that I could indulge in without the guilt.  I am a regular consumer of many **DiGiorno** pizza products so I know that they make quality pizzas at a good price and assumed that their newest product would be a huge hit at my house.   Unfortunately, the **DiGiorno 200 Calorie Portions Pizza** was not at all what I had expected it to be.  My first clue should have been the word "Portions" written underneath the "200 Calorie" heading on the front of the box.  The box is a decent size and I had incorrectly assumed that it contained ONE 200 calorie pizza inside.  Nope.  There are two rectangular-shaped pizzas inside one box and each pizza is 200 calories.  A little disappointed but still eager to eat my cheese & tomato pizza, I proceeded to remove it from the plastic wrap and microwaved it on the silver cooking cardboard that it was packaged with.  I followed the suggested cooking time but ended up overcooking it.  It came out VERY crispy and I sure hoped that it tasted better than it looked. It tasted okay but it wasn't the pizza-loving experience that I had hoped it would be.  There wasn't much cheese on it but considering that it's a 200 calorie pizza, the calorie reduction has to come from something and less cheese would be a front-runner.  The chopped tomatoes, roasted garlic & marinara sauce tasted fine but the really thin crust made it seem like I was cheating myself out of a really good pizza.  One piece wasn't enough and I was still hungry, so I unwrapped the second pizza and purposely cooked it less than the suggested time.  The second piece was not as crispy and tasted better.  The cheese was more gooey too making it at least appear like there was more cheese. So I ended up eating both pieces of pizza and taking in 400 calories, 18g of fat (8g saturated), 880mg of sodium, 44g of carbs, 2g of fiber, and 18g of protein.  I felt cheated and wished that I had splurged on a REAL slice of pizza, not the low-calorie version.  I'm not sure how many calories are in a slice of pizza from my local take-out place, but if I had one slice that was loaded up on veggies (and a little more cheese), it would have been more filling and mentally satisfying. Even though I still have a few coupons for the **DiGiorno 200 Calorie Portions Pizza**, I will not be buying this product again.  For a Coupon Mom like me, that's saying a lot that I'm willing to throw out my coupons and pay more for another product.  Although, unlike this pizza, I'm just trying to keep things REAL.

I really enjoyed this pizza. I brought it to work for lunch and it surprised me that I liked it. It came out crispy and melted. Each box has two pizza 200 each. The only thing is one wasn't enough. So for 400 calories not too bad.