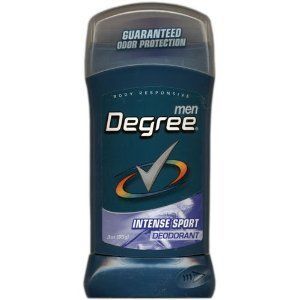 Degree deodorant is the only deodorant I use. It works great to keep me dry throughout the day. I play a lot of sports and have tried many different deodorants and this one is by far the best. It goes on clear and will not mark your clothes although it is a white stick. The great Intense Sport smell makes it an added bonus for sure.

I suppose there are people who are allergic to one or more of the ingredients in anti-perspirants. That's about the only reason I can think of why an average person, under normal circumstances, would choose to purchase and use a deodorant instead of an anti-perspirant/deodorant. Maybe people who play sports need to perspire under their arms, I'm not sure. What I am sure of is that my 12 year old son learned a very valuable life lesson about the difference in controlling perspiration and in just making sweat smell better when he threw a stick of **Degree Men Silver Ion Technology Deodorant, Intense Sport **into our shopping cart recently. I didn't pay any attention to the stick of deoderant my son chose. I bought it, he used it, then a few days later he told me it didn't work. He said he thought maybe it had expired...he is only twelve. I asked him what on earth he was talking about and he told me that he and his friend had been playing football in our yard and his shirt was soaked under the arms with sweat. He was standing very close to me and he didn't smell like a wet dog or anything, so I didn't understand at first. When I got a little closer I became more confused because I thought he smelled kind of nice and fresh, considering the fact that he had been outside playing all day. I could see the wet perspiration under the arms of his navy blue t-shirt, so I thought he and I were both losing our minds. Then it hit me. I told my son to go get his new deodorant and he did. When he handed it to me, it all made sense. He had chosen **Degree Men Silver Ion Technology Deodorant, Intense Sport**, which smells very nice and even makes sweat smell fresh and clean but an anti-perspirant it is not! My son was sweating profusely, but he smelled just fine! So, he and I had a long conversation about how anti-perspirants help control underarm perspiration and deodorant doesn't. Deodorant helps underarm perspiration to not stink. Ergo, our family uses anti-perspirant/deoderant. That way, we won't sweat as much, but if we do sweat some, the deodorant kicks in and makes it not smell as bad. Now, since **Degree Men Silver Ion Technology Deodorant, Intense Sport **smells very good, even when it's covering up the stink of sweat, I suppose it's doing what it's supposed to do and that makes it an above average product. If for whatever reason, you use deodorant that is not also an anti-perspirant, I highly recommend this product. It smells really fresh and it's a gel so it doesn't even leave white marks everywhere. It's very odd to give a product that I will never buy again, and none of my four sons nor my husband will ever use, a 4 star rating, but that's exactly what I am doing. This deodorant does not control underarm perspiration at all, but it doesn't claim it will. It claims it will control the odor of underarm perspiration and it does that very well. So strangely enough--4 stars for **Degree Men Silver Ion Technology Deodorant, Intense Sport**. It does a super job of making sweat not stink.

Deodorant products are presented in only a few basic forms (solid, gel, roll- on, etc), but there are definite differences from one brand to the next, both in scent and in odor/wetness fighting abilities. Those who want a deodorant that does it all for a fair price might want to consider **Degree Intense Sport**. **Deodorant Commentary:** Degree Intense Sport is a stick style of deodorant made with men in mind. The scent of this product is unmistakably masculine and, according to the manufacturer, the intensity is kicked up a notch to handle the excess perspiration common with many men. Degree Intense Sport is longer lasting than most deodorants with the ability to keep you odor free for a full twenty- four hours. The wetness protection is good, too, at least based on my experience, but one must realize that I do not involve myself in much physical activity on a normal day. Still, when I do get active, I have noticed that, when I use Degree Intense Sport, the sweat stays on my forehead and not on my armpits. Degree Intense Sport is about on par with most Degree deodorant products and it is offered for a fair price. I must confess, though, that the product is not as extreme as I thought it would be. The manufacturer promotes this with the word "intense" in the name, but in truth, it isn't much more powerful than other Degree products. **Bottom Line Viewpoint:** Degree Intense Sport is a very good deodorant product for both odor and wetness control. It isn't as amazing as its name might lead you to believe, but it is an effective deodorant that offers good protection.

My husband is very picky about his deodorants.The only one he will use is Degree Stick-Intense Sport.He says it really works well for him and I have to agree because he never smells bad.He really plays sports and gets really hot doing so. After his softball games his shirt is always wet but still no bad odor's.As you probably know this makes everyone happy. Degree Intense Sport Stick also glides on easily and smoothly, according to my husband.It is also reasonable in price. I manage to find coupons online for Degree Deodorant also. That always helps. I personally do not use Degree Deodorant but I am glad that my husband likes it due to the fact that it really works,rather he is going to Church to sit quietly or if he is going to work or to participate in sports.It keeps him smelling clean no matter what he is doing. I highly recommend Degree Men's Deodorant Stick - Intense Sport for men, rather they are active in sports or not.

**The Degree for Men Deodorant Stick (with "Silver Ion Technology") - Intense Sport functions well, but does not have the same lasting power as other brands. If you have an active day, you may find that the deodorant seems to wear off. Old Spice High Endurance performs better. The stick is 3.0 ounces, so at least Unilever in not cutting corners with weight. The deodorant does not stain clothes (at least not immediately). The "intense sport" scent smells alright, though this is one of the better smelling deodorants when you have been sweating. The "silver ion technology" is not really explained, but it is probably why the deodorant masks the scent of sweat so well. The final verdict? If it is on sale, definitely purchase. If Old Spice High Endurance is less, choose that instead.**

As a teenager many years ago, I found that many types of deodorants didn't work very well for me and caused embarrassing underarm circles, that lead to lots of teasing from classmates. One day I ran out of deodorant and borrowed my step-fathers Degree and wow did it work! Underarm circles are banished unless I'm working out very strenously. I almost always buy this brand now, and if for some reason I use a different type, I always come back to it, I've even caught my husband using this deodorant instead of his because he likes it more. When it comes to deodorant I don't think one can expect perfection. There's still some days occasionally that I feel smelly, or notice underarm rings. However, those days are far and few inbetween.

This product defines nothing of what the label indicates. It is just embarracing to have to ask yourself "Is that me?" And that's just afer an hour of applying this intensive product. If you intend to participate in any intensive sport please make sure you are not mear anyone else.