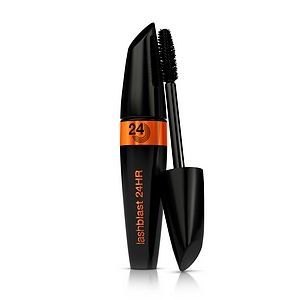 This mascara gives an even coloring and slight length, that is great for work or daytime use. It doesn't give a dramatic lengthing of lashes or a glamorous falsely lash style. It lasts about a month before some flaking occurs with use due to drying out but overall it is a decent mascara for the price.

CoverGirl LashBlast 24 Hour Mascara is great. I give it an eight. The only thing keeping this mascara from a nine is the base of the brush is large. If you tend to apply mascara all the way to the base of your lash which I do; the large base makes the mascara rub onto your eyelid. Which if it rubs on solid it's instant eyeliner but it goes on like splotches and you end up having to clean it off. As for how long it wears it's decent. I don't usually need a long wearing mascara but since becoming a mom; I need something a little more tough to out last my long days. Performance It definitely lasts. There is less flaking than most other mascaras in it's price range. The lengthening and curling effect lasts longer than most others in it's price range. So for it's price CoverGirl LashBlast 24 Hour Mascara is the tops. Ease of Application Ease of application gets a seven because of the large base. I think it's supposed to help but mostly it just makes the mascara rub off on your eyelids.

I am a forty-seven year old female. I recently purchased this mascara because I couldn't find my usual brand. I was very happy with the results. It goes on smooth without the clumps. It thickened my eyelashes and really did make them appear thicker and fuller. It dried quickly and doesn't smudge, even when I have cried, sweated, and taken a nap with it on. The only reason I gave it a nine instead of a ten is because it did not last the twenty-four hours as it was advertised. For me, it does last all day, probably about twelve hours, which is plenty long enough for me. Even though this does not bother me and is no big deal, but may be for someone else. The other thing I don't like a whole lot is the brush is very large and thick, which makes applying to the lower lashes a little more difficult, but it is well worth the extra time it takes. I would recommend this mascara to anyone wanting eyelashes that look fuller and thicker, without smudging. I will be buying this again in the future.

I love this mascara. Truly does last all day with out flaking off like other mascaras. Is truly black and does help the appearance of thicker longer and fuller lashes. Though without the use of something else can give the appearance of clumpy lashes. Performance Amazing Ease of Application Goes on effortlessly

I absolutely love this product. In a matter of seconds my lashes go from thin to astonishing. I do not go a day without applying this mascara. I love that they made this 24 hour formula, because I work 3rd shift and a lot of the time I am too tired to try to remove all of my makeup. With this mascara I can wake up and go run my errands without even re-applying it and it still looks amazing. Anyone with a busy schedule would love the convenience of this mascara.

I am always trying different types of mascaras, trying to find the one that gives me the most fullness, volume, and length. Lashblast 24 Hour mascara does a pretty good job at giving me that. It makes my lashes super black and striking. It also gives great fullness without clumping (at first). It does start to flake long before the 24 hour mark though. It also leaves black circles under your eyes if you wear it into the evening. However, I am very pleased with it anyway. It is semi-easy to remove with eyemake up remover. It does give volume and length. It helps make your eyes pop with or without using eye liner. Performance It does make your eyelashes more full, volumunous, and provides some lengthening. The black is very striking and helps to bring out the color of your eyes. But, it does not last 24 hours without consequences. It will start flaking and it will leave dark circles under your eyes later in the evening or sooner if you are in hot and humid conditions. It still is a great product. But, to say it lasts 24 hours is not exactly true. Ease of Application It is easy to apply and does not cause clumping. The wand is made well enough that you can get to the eyelashes in the corners of your eyes easily. It seems to catch every lash.

I've been on a mission to find a mascara that won't flake or smudge; I know, it's a common one. But it turns out that my super oily skin makes this an unusually hard task to fill. I've been a reasonable fan of CoverGirl's Lashblast mascaras for a little while now, but as effective as they were at curling and thickening my stick-straight, kind of sparse, but long lashes, every one of them flaked eventually. And dark circles under the eyes is just not okay. One mascara even flaked immediately into my eyes! Ack!! So I thought I'd try a long-wear formula like this, LashBlast 24 Hour mascara. And it works! Well... usually. I have yet to figure out why one tube can be inconsistent, but I'd say I'm flake-free about 75% of the time, which is the best I've found so far. There are some caveats, unfortunately. You loose some of the dramatic look of the other LashBlast mascaras; my lashes did not appear quite as thick or nicely curves as with, say, LashBlast Fusion, which was my previous everyday mascara. And, here's the part that really almost turned me away from this product, you have to be sure not to use too much product. If there's too much on your wand, you will likely wind up with clumpy spider-legs for eyelashes. Yuck! That's one of my big mascara pet peeves. And the lashes tend to stick together more, so I have to take the extra time to carefully comb my lashes, which I rarely had to do, at least not this much, with other products. It feels frustratingly wasteful to wipe so much product off the wand before I apply it, but if I don't, I'll have a mess on my lashes. So overall, I'd say that if you have a particular problem with mascara flaking off, like I do, and you have a little extra time to spend fussing over your eye makeup, LashBlast 24 Hour may be a pretty good bet for you. Performance Does seem to stay on longer than many other mascaras I've used and has minimal if any flaking. Ease of Application If you use too much product, you'll have super clumpy lashes. It may take a few applications to find just the right amount for each application - and extra time to comb the lashes.

I started using CoverGirl's Lash Blast Mascara after it came out a few years ago and I haven't stopped using it since! I absolutely love this orange tube! It glides on my lashes and stays on all day just the way I want it too! It comes off just as easily when I'm ready! I have also introduced many of my friends to this specific mascara and they have all loved it just as much. I also love the brush in which comes inside the tube. The bristles don't clump together and dont shed off of the brush when combing the mascara into my lashes. I highly recommend this to anyone who is looking for a new mascara because it has proven to be a favorite for many people. The best thing about the mascara is it can be found anywhere!!