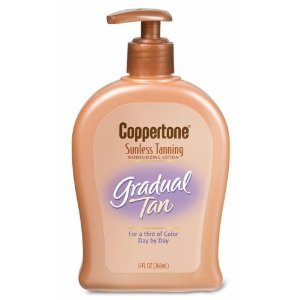 I have used the Coppertone Gradual Tan Sunless Tanning Moisturizing Lotion for many years and I have not had any reason to stop using it. The best thing about the product is that because the tanning process is gradual and also this is basically a lotion, you can use it every day without any risk. I did not notice any difference the first time I started using the product but then after about three weeks on it, my skin gradually and slowly started to tan. I like that it is non-greasy like other tanning lotions and it does not clog my skin pores. Also it dries fairly quickly and penetrates deep into the skin whenever I apply it. It is mild and all natural and creates a very beautiful even tan after a while. For how effective this product is, it costs close to nothing compared to other products in its category. I recommend it if you want a new tanning lotion to try.

I think I made the wrong purchase when I bought this. It suppose to give you a nice tan after a week. I bought it in the summer when I usually like a deeper tan, but it didn't even give me a weak tan. The bottle states it gives you a tan after a week, but I couldn't tell I was much darker. I did have a slight tan from being outside, but it wasn't that dark as I hadn't been outside but maybe a few hours tops in the month before I used this. Still, I figured it should have darkened me a little after using it for a week. It didn't, after using it for over three weeks, I knew it wouldn't work. I figured the color was washing off when I bathed, so it wasn't doing very much good when i would reapply. Even using it in the wintertime didn't do much better, and I'm pretty light skinned in the winter. I haven't purchased it again. I recommend it to someone that is white as a sheet, as that's probably the only way you would see results. Effectiveness This doesn't work very well. I know it's gradual, but it should be darker than this. It's really too light. I think they need to revamp the formula. Ease of Application It's very easy to apply, it goes on like moisturizer. Scent The scent to this Coppertone isn't great, but it's not all that bad. Longevity It seems to wash on as easily as it goes on.

I love Coppertone and they are my go to brand for sunscreen so when I saw that they had a new Gradual Tan Sunless Tanning Moisturizer I picked up a bottle. This really is moisturizing and does a nice job at hydrating without weighing down the skin. As for the tanning aspect it's remarkably good. It's very subtle so you can stop applying it daily and apply it every other day when you reach your desired tan level. This doesn't give you that unfortunate orange tinge that most self tanners provide which is a huge bonus. What I didn't like, and what prevented me from finishing the bottle was the smell. Oddly, this does not have the same chemically smell that most self tanners have. Instead it has a bizarre, almost spoiled odor. Like it had been sitting on the shelf too long. Since my bottle was brand new I knew it wasn't that. So, the formula itself just stinks. Despite the fast drying formula and decent coloring the odor just put me off entirely and I was so not going to continue using it and having to put up with the stink so I returned it after about two uses. I really cannot recommend this for the smell alone. So, unless smells don't bother you this is probably one to pass on.

I give Coppertone Gradual Tan Sunless Tanning Moisturizing Lotion an 8 because it is a great lotion to use to get just enough color to not look pale. It gradually adds color so it is great for beginner sunless tanners so you do not get that overly dark or orange look for a few days. The downside to this lotion is that it has no tint whatsoever. The lotion is white and when you apply it and rub it in you have no indicator as to where you already applied the lotion. You must remember well so you do not overly apply the lotion to certain areas and look very uneven. It did not leave any gross splotches or streaks either. It worked well on those hard to perfect areas such as the elbows, knees, and ankles. It lasts for an average amount of time for each application, with the color starting to fade away on day three and completely gone by day four. I have applied after two days and one day and both have gone successfully. I would recommend this lotion to others.

At first I was unsure about this tanning lotion because I heard that it turned someone orange from one of the reviews I read. It actually works really well, especially if you do sit outside in the sun just to make it work a little faster. It is a sunless tanner so it will work without sitting in the sun. It also works great as a moisturizer. It does not streak which is great. I hate when people can notice that I use tanning lotion. It's not the best lotion but you get what you pay for. It doesn't smell bad like some tanning lotions. It is very easy to use. All you have to do is apply it to your skin and rub it in. I do suggest washing your hands because I noticed an orange tint after a week of using it. It is not water proof so you will want to reapply after swimming (or sweating). I also recommend using some sun block if you are going to be outside. It doesn't have sun screen so you will need extra protection.

Coppertone Gradual Tan Sunless Tanning Moisturizing lotion is not a good product. It smells awful and is greasy. It did make my skin darker, but I did not like consistency of it, so I had to stop using it. The scent is a little overpowering and the lotion did not absorb very well at all. It kind of sat on my skin and left an oily residue that I could not stand. I kept rubbing at my legs, hoping to get it more absorbed. It also made my skin look at little orange, which I hated. That is the one thing I am always trying to stay away from because it obviously looks fake when the color is anything other than a nice brown. I would not recommend this product. It is terrible. Effectiveness This product is effective. It did darken the color of my skin, however, the quality of the lotion is horrible. I hate greasy and oily lotions, so I will never be using this product again. Ease of Application This lotion is a little watery for my taste and does not moisturize as well I as I would have liked.

I have fair skin so I have a hard time finding a good, sublte self tanner that does not make me look orange. I think this product is really good. You can control how dark you get. It is very subtle. If you think its too light, just put another layer on. I think this is a great self tanning product and would continue to use it. Effectiveness It is a great product. It is very effective and you can control how much tan you want. You can tan yourself and go layer by layer so you do not over do it. Ease of Application It is fairly easy to put on. I have been using it for a while and I have a system now. I do not usually do my whole body anyway. Only certain body parts depending. Scent The scent is ok. It does not really matter because the scent does not last very long. The scent is there during the application but it wears off. Longevity It lasts a few days. If you put it on and want to maintain a certain color, just reapply a few days later and keep it up.

Did not work for me. I used the whole bottle everyday and could not tell a difference. I exfoliated before every use and used it everyday. I took a little while to dry. I used it only on my legs as I have no one to help apply to my back, so I had the whole bottle just for my legs. I thought maybe I wasn't using enough in the beginning because I could not see a difference. Didn't take me long to realize that I was using too much because it would never dry. So I cut back. Since I had already invested my money in the bottle, I chose to keep using it. I could not see an color at all. I am not fair skinned, but, I am not naturally brown either. So, after using the whole bottle. Nothing. I have used self tanners before and they have worked. I chose Coppertone this year because it has a good reputation. I read reviews on this product and most people were happy with the product. Maybe I have something in my skin that just counteracted the product. Don't have an answer as to why it didn't work on me, unless I just bought a bad batch.

While this is not my absolute favorite sunless tanning lotion, this is a very good choice. The value is very good for the results that you get. This Coppertone is "Gradual" as the name indicates and I think that that is best for good results. It takes a few days to notice a difference but the effect is natural looking and builds up over time. The scent is nice, light and not too noticeable. The consistency is good, it is a little wetter than some I have tried but it is not too wet. It spreads well and evenly. The application process is simple due in large part to the dispenser. This is my favorite container for sunless tanning lotion. The top makes it easy to dispense and to make sure that you easily get the right quantity of lotion. The formula moisturizes well and is not greasy. It dries quickly and I have never had an issue with streaking. The color is light but if you are patient enough, over time, the tint comes together nicely.