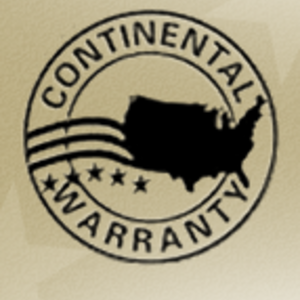 I had never used the warranty that I purchased from my dealer in Nj about 2 years ago and when my vehicle broke down on the way to work I remembered I purchased the policy. The vehicle needed a transmission and I was pleased on the day of the breakdown I was put into a rental car paid by Continental Warranty and my claim was authorized for repair the next day and i was back driving my vehicle in 3 days. Very quick service and all i had to pay for was my $100 deductible on the $2500 bill. Thanks Continental Warranty!

Bought a 07 Trail Blazer off Williams GM in Elkton,Maryland.... 3 month ago,by paying cash the sales manager told me he would sell me a bumper to bumper warranty for 2,000 dollars if i paid cash.I did.Well today my master control switch (windows,locks& mirrors) went bad.Took it to Willis Chevy in Symira,Dealaware to get it fixed(electrical switch),called Continetal for the claim it was denied! Called Williams ....sales manager.. he told me he would take care of it.2 hrs. later he couldn't reach the rep and had finally texted the company.....no response.......The sales manager told me it should be covered ...costed me $457.10,still waiting to see about the refund.The sales manager at Willis told me for the same moey they would sell me the "best" warranty GM has for 2100.00 and it covers a lot of things they say isn't covered.The service writer also told me he had never heard of this company!!!!!!There cons!STAY AWAY FOR THESE CROOKS!!.....Thomas Farrington.....Dover Delaware

Trying to cancel mine now, I used a credit card for automatic payments and had to cancel my card.   NEVER allow them to debit you bank account.  This is by far the worst warranty company I have ever dealt with, they make excuses why something is not covered and do not pay the taxes or shop fees associated with the repair.  Although the online covered parts are somewhat extensive in text, the actual part coverage is very limited at best.   Yes, there are items covered, but there is also an excuse as to why they will not pay for the repair of that part when it breaks.  Common sense does apply here, if you don't maintain your vehicle, they will not pay for anything!!!  The issue here is coverage of warrantee items (or the lack of) for a well maintained vehicle.   REMEMBER-----there are always loopholes and these seem to benefit the warranty companies. I say keep your money and place it in a savings account for repairs, the cost of the warranty (with deductibles, taxes and shop fees) will more often than not be more than the actual repairs over the life of the contract.

Continental Warranty! They are rude and very dishonest. they will find any way to pay a claim. It is to bad. Wish I had taken the money we paid for the policy and banked it. they have 1800.00 dollars, and never paid out a claim. Thanks for nothing but a pain in the ass.

This company came through for me, I bought a warranty from them 3 years ago and had forgotten about it.  My engine went out last month and I was screwed.  I lost my job in February and I just am getting back on my feet, the engine was $3,500 and I need my car. I paid $173.56 , they paid the rest!  I cannot believe it paid off, I thought I had wasted the money, these guys are top shelf.  Adrianne

Lousy telephone personalities. They investigate you!!!! They shouldn't be allowed to stay  in business. They don't pay for fluids, gaskets, screws etc. What are we the consumers paying them for???? Piss poor warranty company. Wanted me to wait ten to fifteen days before they would pay for my car. Or I pay for the work to be done and they send me a check when they feel like it. I'm looking for another warranty company and trying to get my money back. What a head ache it took a week to get my car. I'm not looking for sefvices for nothing, but give me what I paid for. Make sure you get names when dealing with them, every one pushes the blame on someone else.

Continental Warranty weaseled out of a claim based on a technicality which had nothing to do with the maintenance of our vehicle. If you are unfortunate enough to have one of their worthless warranties be sure to read all of the small print. After reading be sure to get each and every service effort on the vehicle not only 'documented' but notorized. Maybe then they'll have to admit the holder wasn't negligent. These con artists are selling worthless warranties, which they have no intention of ever honoring, regardless of devotion to regular service. They will walk away from all payouts based on technical small print B#LLSH&T. I suggest you STAY AWAY or waste your money! This is a fake company with shister salesmen who simply pocket the warranty payments. No one gets paid by these bums...everybody gets screwed.