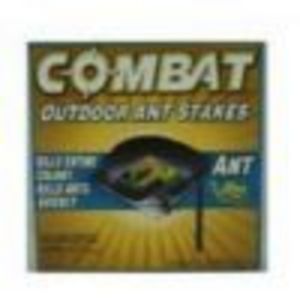 My kitchen and bathroom were both infested with the most annoying 'little black ants.' It was utterly disgusting. When i tried Combat Ant killing gel, they had what I like to call a fiesta. There were so many ants eat the poisin that i found out where they were coming from. I couldnt do anything but trust what the packaging said. It worked. the next morning upwards of 50 ants were on my kitchen counter dead and I'm pretty sure the colony is too. Its been about a month and they havent come back so its good.

I don't usually review lethal products but I have just lived through what I consider to be a terrible domestic situation and would be coping with it still if a neighbor hadn't saved the day by bringing in reinforcements -- namely, *Combat Outdoor Ant Stakes*.  It may be that others are battling their own foes valiantly out there and don't know about advanced warfare like this.  This review is for them but first, a little background music ... When I first moved into my condo years ago, we were engaged in active trench warfare against bugs which meant that Joe, the exterminator, would show up on one Saturday of each month.  Joe apparently got out of bed in the morning before even God was up and most of us would greet him at our doors in various stages of pajamas, general undress, and sleepy semi-consciousness **BUT** he got the job done.  Eventually, our building became a bug-free zone (not counting an occasional spider) and so it remained until this year.  I'm not sure what changed but suddenly some of our homes were invaded by huge, pitch black, and incredibly FAST carpenter ants.  Like many women, I tend to over-react to scuttling things and I *really* didn't like these ants.  Not only did they make me feel slimy but -- in the event someone inadvertently sat on one -- these insects could BITE (**ask me how I know this!**)  I smuggled in a can of Raid Ant & Roach Killer, trying to systematically lay down a killing ground and a barrier against more ants invading.  A week later, the can of Raid was lying on its side in my bedroom and I had reverted to the Neanderthal approach, whacking away with folded up newspapers and hollering "***Die, you (expletives deleted)!**"* ... none of which did any good.  Then one of the other owners gave me a box of *Combat Outdoor Ant Stakes* and instructions on what to do with them.  I was not impressed with what I perceived to be cheap, flimsy things but I assembled them and stuck them into the ground along the perimeter of our building every 15 or 20 feet and then sat back and waited, not expecting much.  **BUT IT WORKED**.  That was a couple weeks ago and I haven't seen an ant since. According to the graphic description on the package, *Combat* attracts foraging worker ants to the bait feeding station where they mistake the poison for food, trustfully carry it back to their colony, there to share the wealth and inadvertently poison the Queen and everybody else in the nest.  Ask me if I feel guilty about this!  **HA!  War is Hell!**