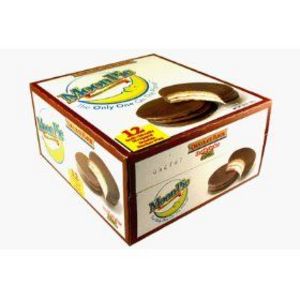 We were at the local discount bakery when I spied these Moon Pies from my past. "Oh, I thought, these were so good when I was a kid". I decided, against my better judgement to buy the Moon Pies and share these wonderful concoctions with my children. WRONG. Either, as a child, I had absolutely no taste or they are just not the same. Who knows. Either way, no one liked them. The cake part was dry and crumbly the marshmallow insides were lacking. The chocolatey layer coating was disgusting. You could almost taste the hydrogenated oils oozing from them. We each tasted one bite and threw the rest of the cookie in the trash. Now, possibly some folks will love these. In fact, I took the box of Moon Pies that were left over and set them on the table at work. They disappeared before lunch time. No complaints there. I have to admit, we do not purchase many store bought sweets and maybe my standards are too high. But I wouldn't buy these things again on a bet.

You know some things never do change just look at this. When I grew up you did not have all kinds of candy cookies and the snacks that you can get today. Most of the things your mom had to make. So the ones you bought you remembered because you got the same ones next time. Well the Moon Pie is still here and is still made by the same bakery it started in. You can get them in many flavors too now. they are : Chocolate, Vanilla, Strawberry, Banana, Lemon, Orange, Peanut Butter, Mint, Blueberry, and Green Tea. So now I want to give you a little story about them.                                  **The History and Origin of The Moon Pie                                         **        Marshmallow cream (fluff) began shipping outside of New England in late 1927. By 1929, marshmallow cream had made its way to Chattanooga, TN. During that year, the coal mines near Chattanooga began selling marshmallow cream in their company store. The miners discovered that graham crackers dipped in the marshmallow cream made a great snack. A salesman for the Chattanooga Bakery sold bakery goods on a route to the coal miners. Pretty soon, the only sales that were made by the bakery salesman were for graham crackers. The salesman explained his low sales to M.P. (Mitchell Poe) Shauf, the general foreman and chef for the Chattanooga Bakery. M.P. Shauf decided to make something for the miners to buy. One day in late 1929, after several different recipes, he made a full size pie with graham crackers and marshmallow fluff. That same day, he had his 3 year old grandson, Stanley Shauf with him at the bakery and offered his grandson a pie to taste. The pie had small indentions where the marshmallow cream was cooked and bubbles had popped. His grandson said it looks like the moon. M.P. Shauf yelled "Moon Pie' so loud that it scared his grandson to tears. Since New Year's Eve 2008, the city of Mobile, Alabama raises a 12-foot tall lighted mechanical moon pie to celebrate the coming of the new year. The giant banana colored MoonPie is raised by a crane to a height of 200 feet as the clock strikes midnight. Also the city had for the 2008 New Year's celebration the world's largest moon pie baked for the occasion. It weighed 55 pounds and contained 45,000 calories.           So some things dont change and I have sat here and ate 5 of the Mini Moon Pies while doing this review. I still eat them all the time. they never have changed and so another tradition lives on. If you have not tried them you don't know what you missed.