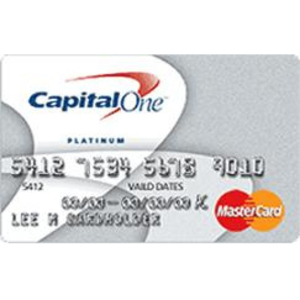 Highly recommend this secured card for ANYONE who is trying to improve their credit, build their credit or even to just use in general. As long as you stay on top of paying your payments ON TIME, stay under your credit limit and use at least 1-2 times a month, you'll for sure start to see a difference in your credit within just a couple months. The amount you pay upfront isn't much at all and the best part is you get it back as long as you don't default on your payments. Plus they tend to raise your credit limit quite quickly compared to many other secured credit cards. Bottom line is if I were you I'd ABSOLUTELY, DEFINITELY get this card!!

I have to say, I don't care for this card at all. I have had it for over three years now and there is not a credit limit increase to be seen. In fact, they won't even talk to you about it. I spent an hour on the phone with Capital One one day trying to find out about an increase and being told no without anyone having any reason why. Finally, someone got on the phone that told me that they do not allow customer initiated credit limit increases or even inquiries with there secured card. It was really frustrating because at that point I had had the card just short of two years with payments that were always early and usually over the minimum and never over my credit line, all $200 dollars of it . The annual fee isn't too bad, $35, much lower than the "competition". The security deposit depends on your credit risk, either $49, $99 or $200 for a $200 credit limit. You can increase your credit limit by sending more money at any time, not just when you open it. But that increase is dollar for dollar, if you send $500 they will give you a $500 increase, it will not be more than that even if you only had to secure 25 or 50% of the initial line. The only reason that I give this card a good rating is that it does report to the credit bureaus and will help to improve your rating. Capital One did sent me a pre-approval for a halfway decent card about 2 1/2 years after I got this one. That card put me on "credit steps" and now I have a second card, unsecured, that looks much better as the limit is about 4x as high. In conclusion, this card is okay if you don't have a better choice, it is certainly not the worst you can get, but don't ever expect them to unsecure it or raise your limit without you sending additional funds. It seems that they used to do those things, based on Google searches of the card, but they have flat out told me they don't, so I think they changed their policy. T Customer Service Kept me on the phone for an hour to answer a question that the first person should have known. If you try to talk to Capital One about a question you have, you might as well address it to your nearest wall, you will be less frustrated because they just give you some scripted answers that don't ever pertain to the question you asked to start with. I have, after about four attempts at asking different questions, found out that it is much easier to just do extended Google searches for similar situations than to attempt to contact them. Available Rates The interest rate is high but it is for all secured cards so that is par for the course. Their annual fee is much lower than other companies that offer secured cards with easy approval. Overall, I am happy with the fees.

The Capitol One Secured MasterCard is a decent option for someone who has poor credit and can't be qualified for any other unsecured credit cards. I chose to go with Capitol One after researching many other secured cards and finding that this one was the only card where I wouldn't have to put the entire credit limit upfront in order to get the card. I had quite a few problems with credit cards in the past and even though I have paid them off my score was still affected. Because my credit was so bad I could only qualify for a $200 limit through Capitol One but unlike other companies, I only had to give a security deposit of $99. It says on the Capitol One website that after you have had the card for so long they may consider you for an unsecured credit card through them instead although I haven't owned this unsecured card for that long to get to that point yet. I'm hoping the time will come but they don't really tell you when it would/will happen so there is no real way of knowing. Since getting the card my credit score has gone up approximately 30 points so it definitely is making things go in the right direction.