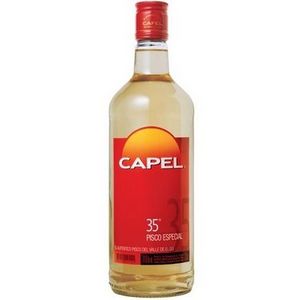 Capel Pisco is a great pisco from Chile.  Though Pisco is not widely popular in the US, it is the nation spirit of Chile and enjoyed widely in South America. It is made from distilled Muscato grape juice, so I suppose it would technically be a variation on Brandy, but it tastes nothing like a brandy.  It's most like an ultra mildly flavored tequila, or a hybrid of tequila and light rum in style.   Capel Pisco has a little bit of a tequila like character, but not with the heavy aroma, flavor, or weight of tequila.  It's more soft and airy and smooth, like a premium vodka feel, but with a character and flavor all its own. It is an eighty proof spirit, so it packs a pretty good kick, but is soft enough and premium enough that it doesn't taste very strongly of alcohol at all.  Much less alcohol tasting than most vodkas.  More on par with a light rum like Bacardi light.  I think the only reason it's not more popular here must be lack of publicity or lack of availability in many stores, because it's fantastic. Pisco is most traditionally known for being used in Pisco Sour cocktails.  And Capel is very good mixed that way.  However, it is way too versatile to be a one trick pony like that.  I have found it to be almost as versatile as vodka.  It is great served straight as a shot.   It is also great in cola, mountain dew, and fruit juices.  I especially like it in pineapple juice.  Any drink that you might ordinarily make with tequila, might be good made with Capel Pisco instead . If you're looking for a fun departure from monotony of summer drinks (How many margaritas can you really drink before you're dying for something new?), Capel Pisco might be just the drink for you.  It makes a great conversation starter,too.  Most people don't drink pisco regularly, so it gives you an ice breaker to talk to about it. It gets people talking and interacting as they try and describe it and compare it to other drinks and people always get inspired and try new mixers with it.  It's a fun party drink.  And it will make your party memorable and talked about.  People will remember the party where they tried that cool new spirit a whole lot more than they will another party with margaritas.