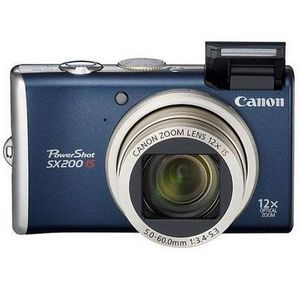 The picture quality is good, colors are true, battery life is long Image Quality I usually use the setting that gives the fewest number of photos, so the image quality is the best. However, on developing the pictures, if I zoom in and try to make an 8 x 10 photo, sometimes I get messages that the image quality will be poor. With the number of megapixels that the camera has, 12.1, I am surprised at how often this happens. Performance To get multiple photos rapidly, it has to be put on a special setting. Otherwise, the lag time between image capture is slow. This is critical when trying to take pictures of a baby who is learning to crawl, and does so right out of the frame, while the shutter is being depressed! Ease of Use I don't know a lot about cameras, so without reading the directions, it's pretty straightforward. I'm sure the directions would clue me in to a lot of features to make the camera use much easier. Portability Cameras are getting smaller, so this one may be large compared to its competitors

I have always used pretty basic cameras.  The quality of the photos I was taking just wasn't that great, so I wanted to upgrade to a better camera that wasn't too big to carry around in my purse.  This camera is the solution!  I knew I didn't want a huge Rebel, but I was tired of the poor quality of point-and-shoots.  This camera fits perfectly in a regular camera case, which slides in my purse safely.  I get many compliments on the sleekness of the camera, as well as the quality of the pictures.  I'll be honest, I haven't used the camera to its fullest with all of the different features and abilities, but the features I have used are awesome.  I use my Canon just for day-to-day photography, so I'm not sure if this camera would be appropriate for a professional photographer, but for the average person, it's great.  Definitely recommend this camera for anyone - it's not too difficult to learn how to use and you won't be disappointed.

As an owner, having brought this camera to Italy, Spain and the Presidential Peaks, NH, I have had much field work with this camera. The only problem I have ever had with this camera is a grain of sand getting into the lens gears and lens. This caused an annoying screeching noise, and the lens eventually fell off. However, it easily snapped on, and the noise ceased. For only a short time, I would have to remove the battery after use to prevent it from turning on at random intervals. This problem, along with all the others, eventually fixed themselves, and the camera now works as it should. Another unexpected "durability test" occurred while walking in the pouring rain through West Side Park in NYC. I stumbled across a heliport as a helicopter was preparing to take off. I decided to video tape this using its HD capabilities. After a longer then expected preparation, the helicopter took off into the sky just as my camera shut off due to the wind and rain mix after an extended time. Worried, I did not turn it on until the following day and it worked. These problems were all caused by myself and were in no way the manufacture's fault. With my experiences pushed aside, the positive aspects of this camera are a list bound to counteract the negatives. Here it goes! This camera has proved, as shown above, its unexpected durability. Battery life is decent, and the rechargeable battery that is looked down upon by many proves to be useful and efficient. Going from a previous 4X zoom Canon Camera to a 12X was quite a jump for me, especially learning that quality comes with the zoom and lens size, not megapixels. However, the camera's HD video is actually a bad feature, for it is too clear and high quality to play on my Intel Atom Netbook, as well as other regular laptops I have tried it on. The video-out feature is great for this reason. After looking for small-compact cameras and realizing quality is more important then size, I quickly chose this camera as my choice because of its compact body with a not so compact lens. The flash has also taken some hits by reviewers, and I strongly disagree. Instead of clicking a button and re-enabling it when you need it, this camera allows you to simply manually shut it while you take the photo, and it automatically pops back up when you release your finger. Speaking of flash, it has proved to not be needed for average nighttime shots. I have been inside without any problem, streets at night, and even Blaze (Pumpkin Festival) and have been able to shoot without a flash. Overall, this camera has been the best I have ever had, and I think it will be hard to match! Good Job, Canon. I expect to remain a customer if and when you keep up the good work!   This review was brought to you by jcoinster.tk Visit for more product reviews and guides.

One of the best digital cameras i've purchased. it has lots of function and even amateur users can easily learn fast. Besides taking good quality pictures has video function can record and play in hd. Very recommend, although it can be a bit pricey for some but it's very worth it!!

I've had this camera for a couple of years now and it's not all I had hoped it would be. I have to say though, I'm a professional photographer. I needed a small camera I could take with me for personal stuff. It's just not practical to lug around a large SLR for everyday use. What attracted me most was the zoom and 12.1 megapixel. Any camera is only as good as the user. If you don't read the user manual and learn how to use your camera your pics aren't going to be as good as they could be if you knew what  you were doing. The camera takes nice photos outdoors. When zoomed in they are fairly crisp as well. However most of my photos are taken in low light and this camera is LOUSY for low light. The photos are grainy and the colors are funky. The lines are fuzzy and unsharp. If you take mostly outdoor photos then this is a great camera. If you are using it for indoor shots look elsewhere.  As for the size, it's fairly bulky. But that's a given with the amount of zoom the camera is capable of. If you don't care about the zoom going for a more compact camera without that feature.

This camera delivers fanatastic picture quality, both indooors and out. There are a lot of manual settings for fine adjustments for those who really like to play with their toys. It is designed to actually make it difficult to put your finger over the pop-up flash, which is a nice touch. (Some of these modern cameras are the size of cracker jack toys, but this one actually feels like a camera.) The menus are easy to navigate and it has easy to use video playback features. The rechargeable battery lasts a long time, although having an extra is always a good idea. The auto focus and zoom features work great, without being finnicky, although the zoom feature does not work on the video function for some reason. You can set it to an automatic mode where it will pick the best style for the shot, but it takes a few seconds to adjust between modes which can be an issue if you are not prepared for it. All in all, a really nice camera.

The Canon SX2001S Digital Camera is compact in size but not is not lacking in quality. If you have had a problem working a camera in the past or if you are an excellent photographer this camera is for you. Point, click and shoot is the best way to establish a relationship between you and this camera. It has features to help you center the photo, uses a red square in the middle of the rear viewing screen, When centered, the little box in the center will change from red to green. Very computer friendly when uploading your pictures on the computer.

I received this Canon Digital Camera as a Christmas gift from my boyfriend, now husband a couple years ago.  I have always enjoyed using it and the quality of pictures is wonderful.  The settings are always fun to experiment with and figure out new ways to do pictures.  I would recommend this digital camera to anyone who wants a good quality camera, but cannot afford a larger, more advanced version.

This  camera has a fabulous zoom lens for the price. i can capture the trees on the mountain behind my house! This camera Uses AA batteries, so youll never have to run and find and outlet to charge your battery just put in four doubble a's! the camera has a swiveling LCD screen too. which is Very useful in taking pictures with you in them without using a tripod... also when you are in crownds its easy to hold above your head to get the picture you want!. The fact you also get nice HD video in one package is a bonus. I really wish i was able to customize the auto function though. and the  Manual is downloaded on your computer. i would love to have a paper back one to take on road trips! that would be great! Cannon is trying to become more green with this though so i totally understand! but its a pain! the image quailty is not as good as i thought it would be but. it is still pretty good if you have the right light!

I got my Canon SX200 IS almost a year ago. We owned a Kodak digital camera and we were looking for a bettter one with more features. I really think this camera is the best one out there for the price! It is 12.1 megapixels and 12x optical zoom!! it has red eye reduction and will notify you after you take the picture if someone blinked. It has different settings for taking pictures such as kids & sports, indoor, outdoor, night, landscape, portrait, easy, and standard. You can also record videos with it. The picture quality is amazing!!! The color of the pictures is perfect. We took pictures at night on the beach and they look wonderful. We also use the zoom and you can get so close, you would never know that the picture was taken from so far away. I usually keep it on auto unless we are taking pictures at night. I've taken plenty of action shots of our kids playing sports and they are never blurry. This camera is easy to use and takes the best pictures for a smaller, compact digital camera.