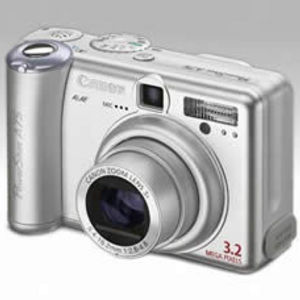 I love my Canon Powershot A75 Digital Camera!  I got my camera for Christmas about 6 years ago.  Last year I noticed that the lcd screen wasn't working.  I looked on Canon's website and found out that it had been recalled.  They sent me a mailing label so I could ship it for free and fixed it for free too.  I got it back and it was as good as new.  It takes great pictures and also records video.  My primary use for it is taking pictures of my children and it does that great even though my two little boys hardly ever stand still for me to take a picture of them.  It's very simple to use and a great point and shoot camera.  I did buy a card for it so that I could take more pictures.  I think without the card it only takes around 32.  I don't know how much it was since it was a present but I'm sure it was worth the money since it's been 6 years since I received it.  When I decide to get a new camera I will definitely get a canon camera!

I have had my Canon Powershot A75 for a little over four years now and it still works pretty well.  Had to send it in once when the lcd screen went black just less than a year later.  After the service, the camera was never the same again though since it's developed some quirks which are minor but noticeable.  I learned that this happened regularly on this particular model, among others and so the service was free of charge, including shipping to and from. The appearance of the camera is pleasing because it's compact but fits comfortably in the palm of your hand and is not too small that it looks like a toy.  Features of this camera include: * playback - allows you to display images individually, magnifying the images, viewing images in sets of nine, jumping between images, and viewing/editing movies. * erasing - can erase images individually or erase all images * shooting features include: selecting menu and settings - resetting settings to default, using the mode dial (creative zone), switching beween autofocus modes, light metering modes, adjusting the exposure, adjusting the tone, changing the ISO speed, changing the photo effect, adjusting the flash output, setting auto rotate function. * advanced playback features - rotating images in the display, attaching sound memos to image, auto play, protecting images. Overall, it is a good functioning digital camera if you can get it on sale.  Digital cameras are relatively inexpensive now so there are many choices to choose from.

I use my camera professionally as a writer/photographer, including shooting videos for use online. I knew about the quality of still photography produced by the camera, but was very pleasantly surprised by the quality for the videos.  If anyone wants a real workhorse camera at a fairly reasonable price, I don't think they could go far wrong in picking this one.

This camera is an easy to use. At 3.2mp, it takes great pictures and fast in looking at the pictures taken with the switch in the back of the body. Enjoy using this camera and have heard that the newer verisons are even better.