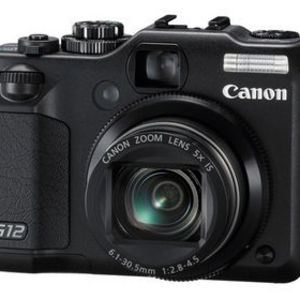 I got this after my canon t2i. This canon g12 is portable. It isn't too big and it's handy. It comes with a flip screen that you can take self shots or either way. I am satisfied with everything about this camera.

I like to think I'm coming up in the world since my husband Pal gave me the **Canon PowerShot G12 Digital Camera** for Christmas.  I am totally an amateur photographer although I have a good eye and a fair working knowledge of *Photo Elements *software.  I also have great affection for a camera that's really, really smart and can cover my tracks.  This one's a 10MP Digital with 5x Optical Image Stabilized Zoom and a 2.8 inch Vari-Angle LCD.  What a confidence booster! The first thing I've appreciated about this camera is its basic operating similarity to the *Canon PowerShot A590* I've been using.  The shutter button operates far more efficiently, but the momentary pause for focus is still part of the deal and now, easier to operate than ever. I'm a natural-light sort of gal who always cluck-clucked over the steps needed to turn off the flash in my old *Canon*.  The **PowerShot G12** really believes me when I turn the flash off.  It also offers me the choice of an automatic camera response to lighting situations which is far more knowledgeable than the previous camera.  Placement of the buttons has changed for the good, and I now have a fold-out LCD Screen which Pal tells me I could flip over if I wanted to take a self-portrait without guesswork!  My previous *Canon* required a quickchange of AA batteries when it ran out of gas.  Re-charging simply wasn't an issue.  The **PowerShot G12 **has a memory card and lithium battery.  A full charge with the included recharger takes about two hours and 20 minutes.  The connection cord to my *IMac* is exactly the same as before so loading photos into the computer represents no learning curve at all.  The process for erasing in-camera also duplicates my previous *Canon*'s procedures. There are many more features that I have yet to explore.  When time allows, I'd like to try shooting movies.  I'd also like to learn more about confidently wandering away from "auto".  That's when all those directions and probably a photography class will be an absolute must! In the meantime, my photos have improved, and I'm having a blast learning and shooting!  What a wonderful gift Pal has given me.