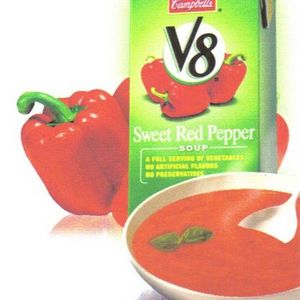 I'm not a soup connoisseur and have no loyalty to any one brand, however, I was intrigued when I noticed **Campbell's V8** new line of soups at my supermarket.  These are not your typical canned soups because they are packaged in bright colorful cartons.  The pictures on the cartons look appetizing and tempting, especially if you are hungry.  I chose the **Sweet Red Pepper** soup for my initiation.   Packaging = A+ Much to my husband's chagrin, I'm not one to read directions so I was surprised when I couldn't open the carton with my hands.  I then noticed four arrows and the word "PINCH" underneath them, indicating that to open the carton, I needed to pinch the top to form an angle and then use scissors to cut the carton open.  Without scissors, I would have been soup-less and out of luck. Ease of Opening = C- Once the carton was opened, getting the soup from the package to my saucepan to my bowl, was pretty quick and easy.  Most soups are made for convenience so I expected nothing less.  On the stove, **Cambell's V8 Sweet Red Pepper** soup was ready to eat in less than five minutes using medium heat.  It's even faster in the microwave (three minutes or less), although the soup cannot be cooked in the carton and needs to be transferred to a microwavable bowl. Convenience and Ease of Cooking = B My carton of **Campbell's V8 Sweet Red Pepper **soup contained two servings, each of which counts as one full serving of vegetables.  Since I ate the entire carton (two cups), that counted as two servings of vegetables for me - woo hoo!  The nutritional information per one cup serving is as follows:  Calories = 120, Total Fat = 1.5g, Sodium = 620mg, Total Carbohydrate = 22g, Fiber = 4g, and Protein = 3g.  If you are watching your sodium intake, then you probably would avoid this soup, but it's a known fact that most packaged soups are high in sodium.  Other than the sodium, I think that the nutrition values are very good, especially if you are looking for a food with a good amount of fiber in it. Nutritional Content = A Okay, so the most important element of **Campbell's V8 Sweet Red Pepper**soup is how does it taste?  I thought it tasted pretty good.  Again, I'm not a soup connoisseur, but I know enough about soup to know the difference between a so-so soup from the can versus a hearty soup out of a carton.  The canned soup is often more watery and this soup was of a thicker and more filling consistency.  My only issue was that this soup tasted more like tomato soup than sweet red pepper soup.  It smelled like tomato soup, looked like tomato soup, and tasted like tomato soup.  Because it's marketed as red pepper soup, I have to deduct a grade for taste because I just couldn't taste the peppers in it.  Tomato puree is the second ingredient on the carton (followed by red peppers and crushed tomatoes), so I'm sure that has something to do with it. Taste = B My overall, unprofessional, opinion-only, grade for **Campbell's V8 Sweet Red Pepper** soup is a "B."  It's a healthy, convenient, and filling soup that tastes pretty good.