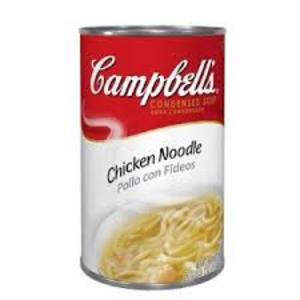 This chicken noodle soup is one of the best soups I have ever enjoyed. It is very delicious, it is very tasty and I really like the flavor. The chicken noodle soup does not take long to make, you can use the stove top to make it or you can use the microwave. If you use the stove top just put the soup in a pot and just heat the soup up slowly, it takes about five to ten minutes which is great.

I loved Campbell's Chicken Noodle soup since I was young and it always conjured up memories of being a child. Mom used to fix it for us when it was cold and snowy. Recently I bought several cans of my favorite Chicken Noodle but I have to say that I was so disappointed. Either I have had a sudden change of taste or this soup is now one of the worst that I have eaten. At first I thought I had picked up a salt free soup but after checking the label decided that was not it. I tried to add some salt only to now have a salty liquid that still tasted terrible. Some things are better left alone and sorry Campbell's your soup is one of them. The cans are smaller, the taste is gone, now it watered down noodles. I ended up making a home made vegetable soup and poured the Campbell's soup in it. Didn't turn out to bad however I will miss the "old fashioned soup of my childhood. to bad some things should be left as is.

I've been eating Campbell's Condensed Chicken Noodle Soup pretty much my entire life. No, it's not the healthiest thing you can eat, but it's the perfect thing when you're sick or feeling nostalgic. It's quick and easy, and it definitely feels like comfort food. The main problem with Campbell's soups is the salt. I try to fix this a bit by pouring out some of the broth when I open the can and then adding plain water (but not usually as much as the instructions say to). This lowers the salt content a little bit, and I think it tastes better this way. You can definitely taste the difference with a little less salt. The regular way is just too salty for me. Cambell's in general is a brand that you don't have to guess about it. You know what you'll get when you buy it. This soup (and the rest of the condensed soups) are pretty well-known old favorites. They aren't expensive, which is great, and you can often find coupons for them, which makes them an even better deal.

This soup is a staple in probably every household. It is easy to make, fairly inexpensive, and always good to eat. There are probably low-sodium versions of this soup, which probably are better for you, because there is quite a bit of sodium in the regular kind. Also, I didn't find much chicken in the can, either. Overall, if someone wants a quick bowl of soup, this is the one to choose.

I grew up on Campbell's soups and I've eaten them for years as an adult. But, I haven't had their chicken noodle soup for several years. I bought several cans when I was sick and then I've been eating the rest of the supply over the last few months. It doesn't taste or look the same as what I remember. The noodles do not taste or look the same. The broth's consistency is different. I know their soups are now using sea salt, too -- which I don't really like the taste of. With the sea salt, I can taste a difference than from before with regular table salt. I really didn't enjoy eating this soup and it was quite disappointing.

In my opinion, Campbell's Condensed Chiken Noodle Soup is great if you want something quick to eat when you are at home. My children love to eat Campbell soups because they have a great flavour and they love the bits of chicken they contain. My only concern is the amount of sodium it contains, but aside from that, I would reccomend this for everyone .

This is a classic chicken noodle soup variety, however the taste of this product might be one of the worst on the market. The soup is extremely salty and there is not much chicken flavoring. The broth is condensed so you add water and make the soup taste like watered down broth. Many other chicken soup options exist and are probably worth trying before this one.

Chicken soup has always been my favorite kind of soup since I was little, and my top brand has been Campbell's Chicken Noodle with the long, soft noodles, nice-sized chicken chunks, and the great-tasting broth that I just couldn't make from scratch. It's so easy to just open the can and heat it up in a bowl in the microwave, and you can sop up the broth with sourdough bread or butter crackers like I do to enjoy the taste you get out of those combinations. Especially the salty butter-flavored crackers broken into the soup so that they get completely soggy when the broth soaks in!

No one attack me here! Campbell's Chicken Noodle Soup is a classic that's been around for generations. What do we eat when we're sick with a cold? Chicken noodle soup. What do we make as a simple lunch on cold days? Chicken noodle soup. It's good, hot, tasteful, easy to make, and inexpensive. However, I have a son who is a vacuum cleaner. He can eat and eat and eat and I look at him and wonder where it all goes! He is thin as a rail! Nonetheless, I made him a nice hot bowl of Campbell's Chicken Noodle Soup a while back with a peanut butter sandwich accompaniment. I think I went into the kitchen to grab a butter knife for something and I came back and his soup was completely gone!! He went back into the kitchen to get another bowl and was disappointed to see I had grabbed the last of it.  He and I are both very particular and specific about foods--why we like certain ones, why we don't. He complained immediately of not being satisfied as far as hunger goes. And I must admit, I felt the same. I mean the noodles are meager and too soft, their quantity certainly doesn't satisfy a growing boy, and I don't think I had but one shred of chicken in my whole bowl! Even if the chicken is real, it doesn't appear to be authentic chicken. What I mean is that all the chicken is the exact same size, no bigger than the pupil in my eye. Dude, if I wanted to drink a cup of chicken broth, then that's what I would have done. So, believe it or not I decided to try an experiment. I had bought three cans anyway so after this can we had two left. Well, I made the two cans together--this time hoping for my son to be satisfied. I tell you right now, he was already disappointed we were having chicken noodle soup--for his first time had turned him off from chicken noodle soup. But I tried to give him a big bowl of it, hoping he would be satisfied.  He literally got angry--at the soup!! He was upset because he felt he had to drink all that broth just to get to the noodles. There was too much broth and for the amount of broth he had to drink just to get to the pathetic pile of noodles at the bottom (not to mention the scarce chicken) simply enraged him.  Now, he's a good boy, but we take food seriously in our house. I mean, we like hearty, satisfying, simple but tantalizing, variety, and quality as well as quantity. You can have a lot of low-quality stuff or a low quantity of high quality stuff. We like balanced. There are probably some die-hard chicken soup fans who would probably revolt if you all even changed the label. Fair enough. But why not make a heartier version of the classic? Now we see the Campbell's chunky, but that's not what I'm talking about. I'm talking about Hearty CLASSIC. Heartier, bigger noodles, heartier broth, and heartier chicken. Not all that extra carrots and celery--for that is not in the original. Just plain ole bigger, better, heartier classic chicken noodle soup.

This is my favorite soup of all time. I've tried other brands of chicken noodle soup and they all leave me wanting this one. There's something so comforting about the smell and taste, it just automatically makes me feel better.