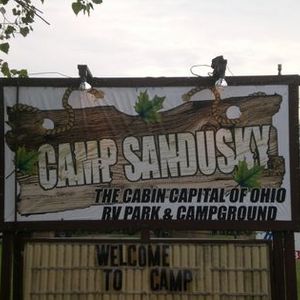 **To the Point**We stopped for two nights at Camp Sandusky Campground and Cabins just to recharge our batteries. It was a pleasant stay for the most part..... **A Closer View** This is a large campground located at 3518 Tiffin Avenue in Sandusky, Ohio. Cedar Point Amusement and Water Park is here. I had never heard of it but that along with a very nice marina seem to be the draws to this area. The man with whom I spoke was very nice. There was a very young man in the office when I checked in. The office had a small supply of food and camping items including fans for sale or to rent. Next to the office was an arcade with state of the art machines. For rent were items like horseshoes.  They advertise planned activities though I didn't see any listed nor did we get anything that suggested there were any. There was a nice pool and playground. The sites were large and grassy with a few trees. We had a fire ring, a picnic table and a grill.  We almost abutted a corn field. They have many cabins to rent which you can see from the name. In fact they are called the "Cabin Capital of Ohio." These cabins line much of the outer perimeter of the park. These cabins only have bunk beds in them. Every morning from 8:00a.m. to 10:00a.m. in the "pancake house" - a building on the premises- a pancake breakfast for $ 3.95 is offered There is a bunny farm. The store has bunny food for sale. This is considered and is a family campground. They offer all sorts of sites from primitive to full hook up sites which is what we had. This is not an inexpensive campground. They run specials which you can see herehttp://www.campsandusky.com/specials/ however we were there for two nights at a rate of $45.00 a night. Note: You cannot bring in your own firewood. They have firewood for sale. Having said this one of my peeves about this park was the **lack of enforcement of rules**. This park doesn't have a lot of rules but one says there's a $100 fine for tying rope to trees (to hang clothes). Personally I could care less if people do this but if they aren't supposed to then fine them or take it off the literature. I may sound like a Pollyanna but this is how I feel. My bigger complaint had to do with neighbors that came in well after the 11:00 quiet time rule. I have no problem with people coming in late if they are quiet. Not only weren't they quiet they proceeded to set up a large tent, put down their awning, move their picnic table on to a carpet - well you get the idea. The first time I looked out I saw a kid in our site. I opened the door and asked what he was doing and he told me setting up a tent. I reminded him that it was quiet time. This group was not being quiet to say the least. I don't understand how people can be so disrespectful. About ½ hour later when this continued I opened the door and spoke with a woman I assumed to be the mother. She said "they have to have someplace to sleep." If you don't know trailers let me explain that they were in a very large - perhaps a 35' Class A motor home which sleeps at least 6. There was no need for this to go on. They could have waited 6 hours and set up in the morning. I'm finishing my rant by saying that the manager, Jeff Murphy, did the right thing. **I stopped in the office as we left and gave him my Viewpoints card.** I explained the situation. He stapled the card to a form and I filled out what happened. I am re-writing this because the owner hopefully will come here and read this. I got my money back for one night. I told Jeff that he either must heavily fine these people of give me one night back so he did do the right thing and for that I am rating them 4 stars. Camp Sandusky is a nice family campground. I could almost say it's a destination campground. If there were planned activities I would rate them five stars. 1-800-431-7448http://www.campsandusky.com **Jo's Viewpoint** **I like it!**