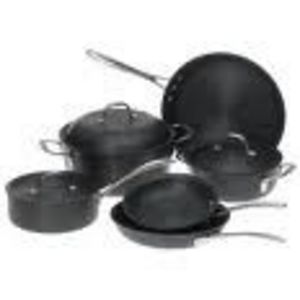 I have had my Calphalon pots and pans for over a year now and have really enjoyed them. I love the hard adonized surface and have had no problems at all with them. I use silicone utensils on them and they have gotten no scratches. I like the pots, but do have a complaint about the lids. When I have something on the stove and take the lid off (like for pasta), the lid travels around on my glasstop surface. It's like there is pressure underneath it or something and it slides all around. I've never had a lid fall off, but if you don't have some kind of raised edge then I can see that happening. So maybe turn the lids with the handle side down and that shouldn't happen. But overall I really love these pots and pans. Design Another thing about the design I have found is that with the steamer insert the handles get very hot. So just be careful of that not to burn yourself. And then the other thing abuot the design would be that the lids move around by themselves on my glass top stove after the water has boiled and I have taken the lid off.

Calphalon stands behind their products. The anodized products are very safe for food, the finish does not "cook off", which will happen with Teflon or coated pans. I am can take it from the cook top to the oven to finish off the cooking. Doesn't Stick One has to remember the importance of not turning or lifting off the food until it is ready to be turned over or removed from pan

I own the Calphalon 12-inch Hard Anodized Everyday Pan with Lid and I think it's a great pan. There are certain guidelines for using this pan - it can't go in the dishwasher and needs to be preheated, but with a little elbow grease and foresight you will be rewarded with some delicious food. I find that it produces a better sear on meat than non-stick or stainless steel pans, and all that flavor in the stuck-on bits can easily be converted to a pan sauce. Delicious and makes clean up easier! It's also oven safe and a good size for braising a small piece of meat or for roasting vegetables. The lid fits well and isn't too heavy. I really do use the Everyday Pan every day - my non-stick pan is only used for eggs now!

I received a large skillet/sauce pan from the Calphalon cookware line about 3 years ago and I love it. It always amazes me how it cleans itself! Seriously, I have never had to scrub this pan it just slides off! I have heard all the scares from using the nonstick cookware but with all the use I have put this pan to I cannot see any wear or scratches in the nonstick surface!! I think when I received my Calphalon pan it stated do not put in dishwasher? I can't remember for sure, but I did at any rate. It did not harm the nonstick surface, but did put a cloudy film on the outside of the pan that cannot get off. It doesn't affect the pan it is just a cosmetic faux pas. The Calphalon Cookware can be pricey, but usually with some store sales and store coupons you can get a pretty good deal on the cookware. Buying the cookware in pieces and not the whole set helps too. That is why I have only one right now!

I have had my 2.5 quart pot for at least two years now and I use it a few times a month. It is fantastic for cooking rice/quinoa and that's primarily how I use it though I've made sauces in it as well. It traps in heat well, and I haven't found the lack of glass lid a detriment. I have never put mine through the dishwasher and don't plan to. You do need to purchase some barkeepers friend or similair product though to clean the interior periodically, but any left on staining or bits of food come off easily with that (I've had rice stick before from overcooking and was able to get the fiddly bits off the bottom no problem using that type of product with minimal scrubbing). I wish I owned more from this line as I really like the hard anodize coating where it's not teflon where you have to worry about possible carcinogens but it's not stainless steel where you worry about everything sticking. I have made macoroni and cheese in this pot before and I would not recommend using it for cheese sauces as it was difficult to clean afterwards (though not that much more difficult than stainless steel). I would highly recommend this line!

I was very excited to take the leap from non-stick to Calphalon, but overall I've been disappointed, especially after what I had to pay for it all. My set included three skillets, (8, 10, 12 inch), a five-quart Dutch oven, a three-quart saucepan, a two-quart, and a one-quart. The pans had metal lids, the skillets did not have lids. The pans are heavy, and that was also a problem for me. I always cook in a hurry, so trying to adjust to medium temperatures was taxing (my fault, not the cookwares); then I'd get impatient, turn up the heat, and burn something on. That was NOT any easier to clean up than with any other non-stick pan. Sure, some soaking (and sometimes boiling) would clean it up, but that's true with any not non-stick cookware. I didn't like handwashing always either. One of the kids put the three-quart through the dishwasher, and the color mottled from black to gray. Kind of gave me pause as to how once through a dishwasher could do that to a hard anodized pan.... I ended up throwing out the skillets and went back to a cheap non-stick for eggs and searing meat (and just replace it as needed). I do still use the three-quart and Dutch oven because I don't have anything else in that size. I went back to stainless steel for other saucepans, so I could throw them in the dishwasher. So if you're lazy like me, don't think you'll follow the guidelines, want to cook at high temps, toss it in the dishwasher and be done, these might not be for you.... but I don't attempt to be a gourmet! If you're unsure, I'd suggest trying it out with one pan to see how you like it before investing a lot.

I have mixed feelings about this cookware.  I have 6 pieces of it.  My mom was buying it for me over the years.  I like it because it cooks the food nicely.  It heats evenly and I've found that it heats up quickly, so cooking doesn't take a long time.  The things that I don't like are that it isn't non stick.  This is not so bad because non stick cookware is not the best for you in terms of toxic exposure.  But non stick is definitely easier to cook in.  But that is not the real problem I have with this cookware.  My real problem stems for what it is made out of - aluminum.  Now hte aluminum is in the core, and it supposedly coated so you don't get exposed to it.  But it still makes me nervous.  They say not to cook in aluminum, it's not good for you.  I've also noticed that the pan we use the most seems to be losing it's black coating on it, so I'm wondering what that really means, and what I'm getting exposed to.  While I do enjoy cooking with this stuff, and it was expensive, I am contemplating throwing out the lot of it.

This large Caphalon fry pan with the clear glass lid is excellent for several purposes.  Its labeled an omelette pan but I've already been using it to brown my pork roast.  I like it.  The Anodized covering appears to be very strong and is dishwasher safe as well.  It has a stainless handle on both the pan and on the lid.  The clear glass cover is especially nice  for seeing what is cooking and to manage the heat and speed of the cooking.  I have found glass is much easier to clean than metal covers as well.  Many andonized pans are not safe for dishwashers as they will over time begin to peel and then the pan can cause some ill health issues.  However, this pan is a high quality and it is advertised as being able to be put into the dishwasher.  I believe that this is a feature that cannot be overlooked in our busy days as we try to jam so much into one short day.  This pan was slightly more expensive than others, but I think the additional cost is worth it.

I received a set of Caphalon Pans (one saute, one frying) for Christmas two years ago, and I use them both at least three times a week. They are the best pans i have ever had. They are very heavy and very sturdy. The non-stick sutface is truly non-stick with a little bit of spray-on oil. I've burnt carmelized onions and sauces on them, and dishsoap and a nylon scrubber clean them easily. I also make candy in them, and if you've ever had to clean hardened sugar off a pan, you know how important a good surface is. The only reason I did not give them 5 starts is that after two years and a few incidents with metal tools, there are a few dings in the non-stick surface. It's not peeling off, but it's not flawless anymore like cast iron or a high-end stainless pan would be. The other thing I would change is the handle. It is firmly attached and stays cool, but it is very narrow for the size and weight of the pan. I would like it to have a thicker handle, perhaps covered in silicone to make it non-slip and easier to grip.

I bought a Calphalon hard anodized cookware set about five years ago, and I have enjoyed using every piece of it since.  My absolute favorite feature of this cookware is that it is not coated in Teflon.  I like that pieces of my pans don't get into my food.  (Yuck!!)  I always hated using nonstick skillets--it seemed that no matter how high the quality, the non-stick coating eventually starts to peel off and eventually you end up with tiny bits of it on your food.  Unappetizing.  So, this set met my needs perfectly.  I love that even the biggest pots and pans aren't too heavy, although they are good quality.  The handles never get hot, which is another great feature.  The one thing I don't like about this cookware is that it is sometimes very difficult to clean up.  Since there is not a nonstick coating, food does not just rinse right off.  Sometimes I have to put in quite a lot of elbow grease.  Even so, I love these pots and pans.